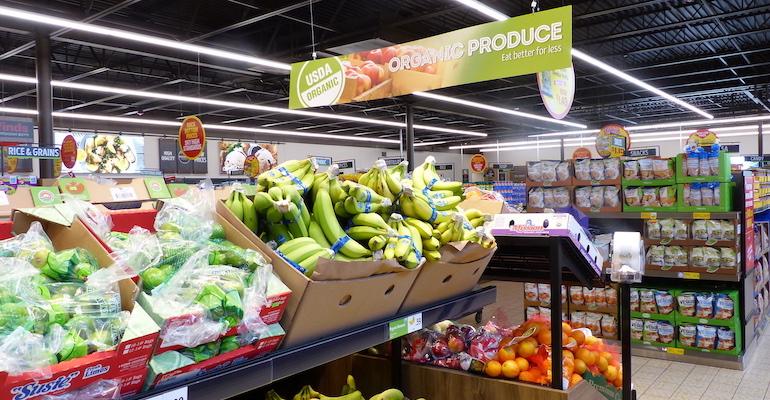 Russell Redman
For the April-to-June period, organic fresh produce sales rose 3.7% in dollar but declined 2.8% in units, according to the Q2 2022 Organic Produce Performance Report from OPN and Category Partners.
Issues & Trends>Consumer Trends

Dollars up and units down in second quarter amid higher pricing, Organic Produce Network reports

From April through June, organic fresh produce sales rose 3.7% to $2.4 billion, compared with 4% growth to $2.3 billion in the 2021 second quarter, according to the Q2 2022 Organic Produce Performance Report from OPN and fresh food research and analysis firm Category Partners. Pricing climbed nearly 7% year over year for the 2022 second quarter, contributing to a 2.8% dip in unit sales to 750 million versus a 0.2% uptick to 770 million a year earlier. 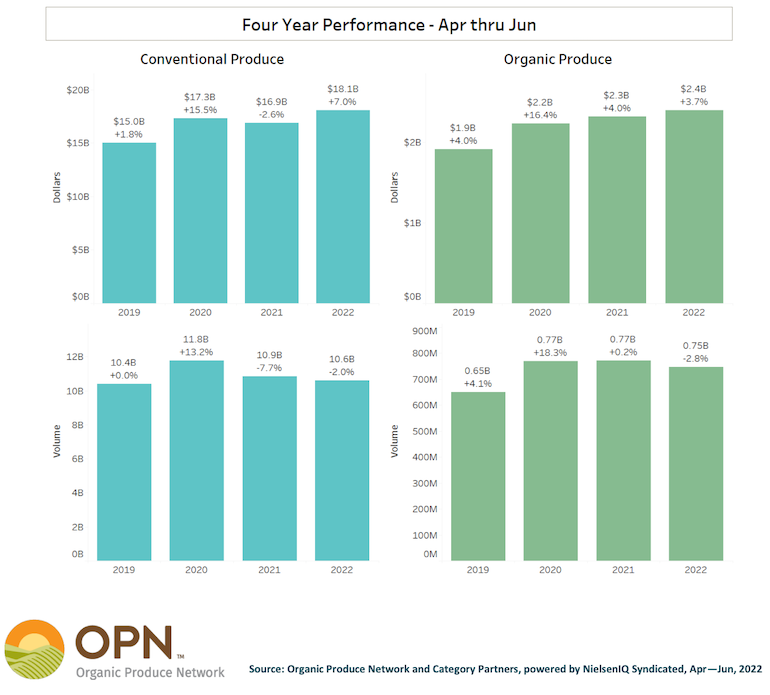 Though carrying a lower average price per pound, conventional produce actually experienced a bigger price hike in the second quarter, the OPN/Category Partners report said. Pricing for organic produce rose 6.7% year over year to $3.22 per pound on average in Q2, compared with a 9.2% increase to $1.71 for conventional produce.

OPN and Category Partners said the findings indicate that consumers are keeping a rein on grocery spending, as inflation often has a bigger impact on higher-priced items, such as many organic fresh produce offerings.

“Seeing a decline in organic volume for Q2 suggests food budgets are under stress in many U.S. households,” said Tom Barnes, CEO of Idaho Falls, Idaho-based Category Partners. “It’s common to see budget-centric consumers trade down, substituting for lower-priced conventional items or shifting from a high-priced organic item to a cheaper organic alternative from another category.” 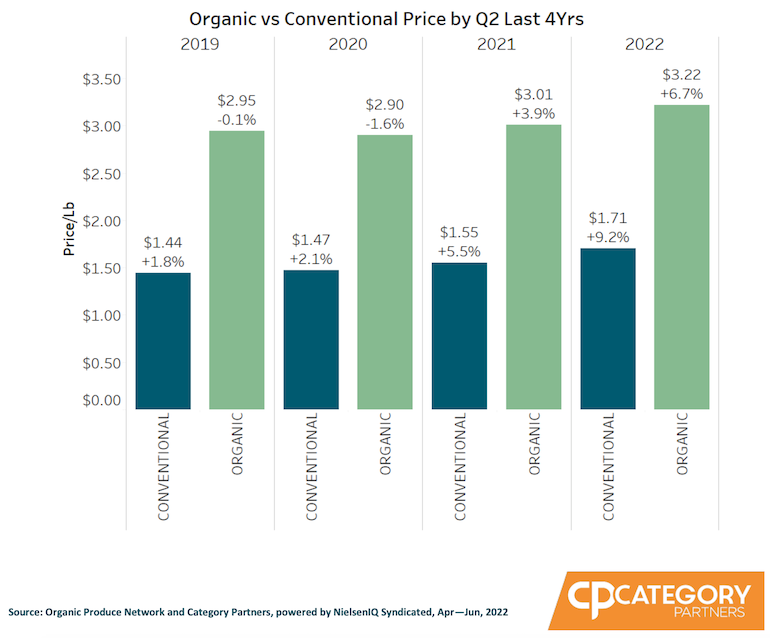 “Bananas are one of the lowest-priced organic fruits and have the smallest price spread between conventional and organic. For the quarter, while nearly every other organic fruit declined in volume, bananas increased in both dollars (+4.3%) and volume (+4%),” he explained. “So for budget-focused consumers still wanting to buy organic, bananas provided a cost-effective option. Suppliers need to be aware of shifting consumer purchase drivers and develop strategies to keep shoppers buying.”

Matt Seeley, co-founder and CEO of Monterey, Calif.-based OPN, remains upbeat on the long-term prospects for organic fresh produce growth. Still, the OPN/Category Partners report noted that organic suppliers and retailers will need to keep an eye on pricing, since light organic shoppers may be enticed to substitute lower-cost conventional produce for similar, higher-priced organic items. The research shows that while price growth for conventional items is higher by percentages, nominal growth is higher for organic items by 5 cents per pound.

“While there are likely some difficult months ahead, the long-term potential for continued organic fresh produce growth remains unchanged,” Seeley observed. “Inflation and supply chain challenges have impacted pricing in the short term. However, organic fresh produce will remain an important component of weekly food shopping as consumers look for healthy, safe and nutritious products for their families.”