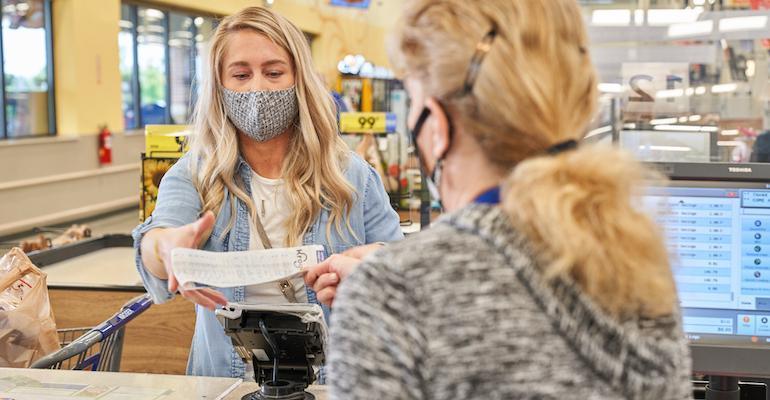 The Kroger Co.
According to a survey from data analytics firm Retail Insight, 65% of U.S. consumers are also now actively looking for promotions and discounts when shopping for groceries.
Issues & Trends>Consumer Trends

Two-thirds of U.S. shoppers seek out promotions and discounts in battle against inflation

Price sensitivity is soaring as consumers tighten their belts — and searching for ways to save money — during the cost-of-living squeeze, new research from data analytics firm Retail Insight reveals.

In a survey of more than 1,000 U.S. consumers, Chicago-based Retail Insight found that over two-thirds (68%) have become more price-conscious since the start of the pandemic when shopping for groceries. That percentage rises to nearly three-quarters (74%) of those 25 to 34 years old. Meanwhile, unrelenting inflation has also led 74% to become more budget-conscious, according to the poll.

With the ongoing disruption to global supply chains, still upended from the pandemic and made more volatile by the war in Ukraine, U.S. shoppers’ heightened sensitivity to prices comes as the cost of food and energy continues to escalate with inflation.

The latest inflation data from the U.S. Bureau of Labor Statistics (BLS) show that the Consumer Price Index (CPI) rose 8.3% (unadjusted) for the 12 months through April, down only slightly from 8.5% in March, 7.9% in February and 7.5% in January. On a month-to-month basis, the April CPI edged up 0.3% (seasonally adjusted), down from a 1.2% uptick in March and the lowest increase so far in 2022.

Retail Insight noted that shoppers are relying on promotions and discounts to help alleviate crushing inflation. Two-thirds (65%) of consumers polled said they are reducing their food spending to lower their cost of living, and 65% are also now actively looking for promotions and discounts when shopping for groceries. Almost seven in 10 (69%) reported being much more likely to compare prices at the shelf.

These changes in shopping behavior are threatening customer loyalty — both to consumer packaged goods (CPG) brands and grocery retailers, Retail Insight’s survey showed. Over half (56%) of U.S. food shoppers said they have switched from branded products to store-brand items to cut back on grocery spending, while 43% have even switched supermarkets.

“Faced with rising costs across every aspect of their businesses — from supply chain volatility and rising costs of production through their supplier networks, to the cost of running store operations or offering online deliveries — grocers face complex and multifaceted challenges when it comes to pricing and promotions in the current economic climate,” according to Paul Boyle, CEO of Retail Insight. “However, this looms all the larger when you consider that less than 50% of promotions are currently implemented to plan, meaning hard-fought margin gains could be left on the table at a time when margins are being squeezed in every direction. By using data to pinpoint compliance issues around promotions, retailers can use these insights to quickly and effectively address and optimize pricing and discounting to make sure promotions pay — both for the retailer and for the shopper.”