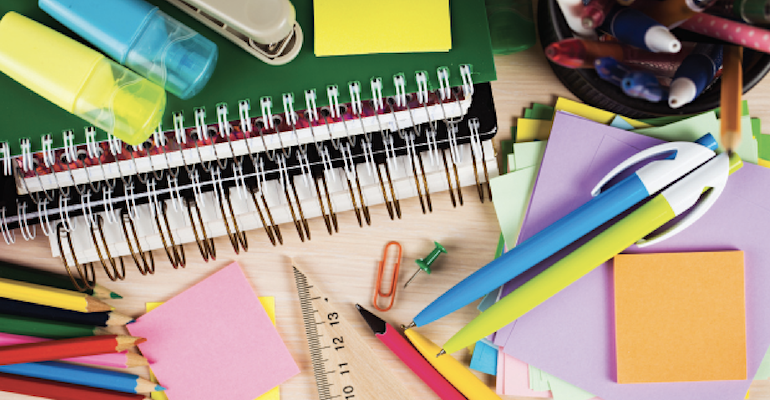 Retailers do their back-to-school homework

Inflation, increasing competition and consumers’ ongoing embrace of e-commerce are all on the syllabus for this year’s back-to-school season.

While supermarkets can always count on back-to-school shopping to drive sales in food categories, nonfoods supplies pose a significant challenge for traditional grocery retailers. Dollar stores, mass merchants, office supply stores and online channels all fight for a slice of the $100 billion-plus sales windfall that includes not only pens, notebooks, ruler and erasers, but also apparel, home décor (for college students) and increasingly, electronics.

This year, the grocery channel will need to fight especially hard to capture market share, given the pressures that inflation is imposing on many families.

“Inflation will have a big impact on how parents and college students shop for back-to-school and how retailers approach the season,” Brittany Steiger, senior analyst for U.S. retail and e-commerce reports at research firm Mintel, told Supermarket News.

Related: Amazon to snare over 20% CPG share during Prime Day

Consumers will engage in value-oriented behaviors, which could include cherry-picking the best deals and a pullback in spending for discretionary items, she noted. 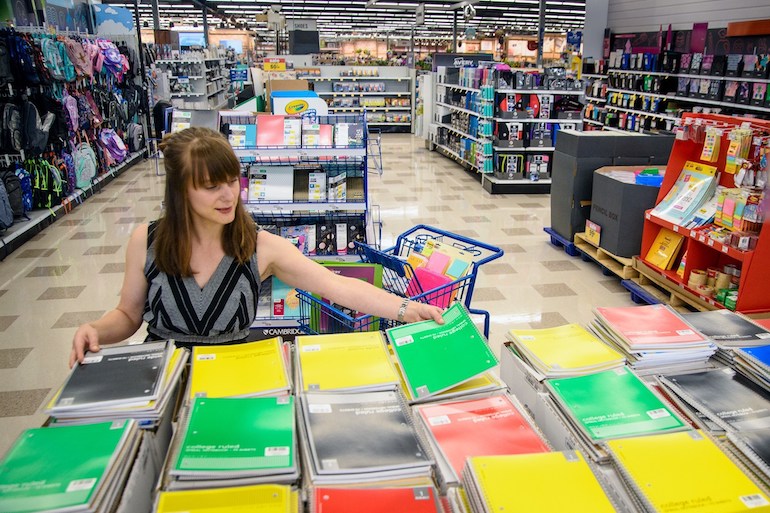 The National Retail Federation estimates overall back-to-school spending, including K-12 and college purchases, at $111 billion for 2022, up from $108 billion last year.

Retailers are likely to focus on merchandising basic supplies and prioritizing essential items, she said. Private label offerings will also likely be an important element of retailers’ assortments this year.

“Retailers would be smart to offer lower-price options alongside popular name brands so parents can easily make substitutions when they are working from a school supplies list,” Steiger said. Other keys to retail success this season that she recommended include transparent communication about pricing and alternative forms of value, such as free shipping for online purchases.

The National Retail Federation (NRF) estimated last year’s total back-to-school spending at about $108 billion, including sales of back-to-college items such as apparel, laptop computers and home furnishings. Not including back-to-college sales, spending for grades K-12 was estimated to be a record $37.1 billion 2021, according to the survey, conducted annually by NRF and Prosper Insights.

For 2022, NRF projects total back-to-school spending, including K-12 and college purchases, of $111 billion. Families with K-12 children plan to spend an average of $864 on school items, about $15 more than last year. College students and their families are expected to spend an average of $1,199 on college or university items, consistent with 2021’s record of $1,200. Compared with 2019, K-12 shoppers stand to spend $168 more on average, with college/university consumers spending an average of $223 more.

NRF noted that K-12 and college shoppers plan to focus their shopping this year instead of spreading it out across multiple retail destinations, as they typically did prior to the pandemic. Based on its 2022 back-to-school poll of 7,830 consumers, NRF said the top five shopping venues cited by K-12 shoppers were online (50%), department stores (45%), discount retailers (40%), clothing stores (37%) and electronics stores (28%). The top back-to-college shopping destinations named were online (43%), department stores (36%), discount stores (29%), office supply stores (27%) and college bookstores (26%).

Data from NielsenIQ illustrates how back-to-school sales have rebounded in the past year, as students around the country returned to in-person learning. For example, sales of pencils across all retail channels were up 21.3% for the 52 weeks ended April 30 after experiencing a decline of 22.2% in the prior-year span. Other common school supplies followed a similar pattern, with sales of personal planners and binders up 16.4% in the most recent 52 weeks, following a decline of 24.7% a year ago; highlighters up 20.8% versus a 14.4% decline a year ago, and manual pencil sharpener sales up 24% following a prior-year decrease of 7.6%. 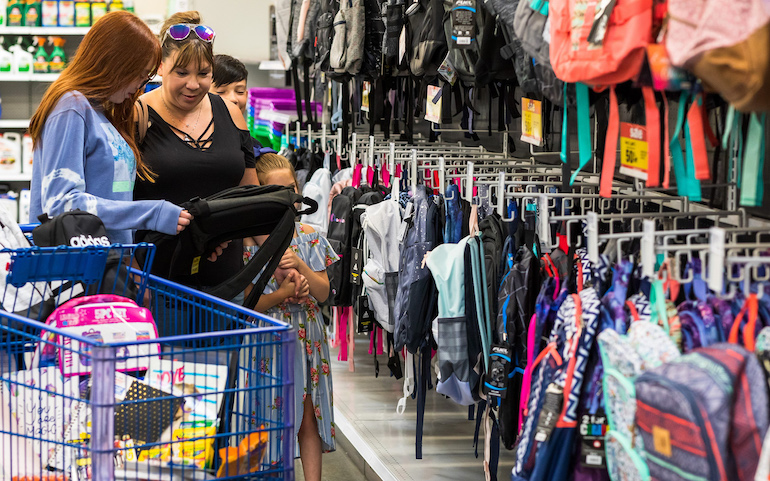 Supermarkets have embraced an array of strategies to capture a share of this seasonal category, including ramping up the convenience of their online offerings for back-to-school. Some have waived click-and-collect fees to encourage online shopping, and others have bundled supplies in promotional packages.

Notably, Kroger has made a more aggressive play for the larger back-to-college market, with a dedicated “college shop” area on its website. Offerings include high-ticket items such as desks, small appliances such as coffee makers and crockpots, and “essentials” like coat hangers and plastic storage boxes.

Back-to-school season also represents an opportunity for tie-ins throughout the store, and retailers often seek to link items in other categories with nonfoods supply purchases.

Minneapolis-based Target, in fact, has become recognized for the back-to-school departments in its stores that combine apparel, home furnishings and basic supplies in a one-stop shop format. The retailer also takes an aggressive stance on value, including promotions such as its Teach Prep Event, which offers teachers 15% off on certain school supplies.

Target, too, seeks to make shopping as convenient as possible with its School List Assist program, which allows shoppers to buy their entire school-specific supply lists online or in the app with a single click, or to shop for the items individually.

The company credited a strong start to its back-to-school and back-to-college seasons last year with driving better-than-expected second-quarter sales.

Mintel’s Steiger predicted that the back-to-school season will expand beyond the typical late-summer months.

“Back-to-school shopping will still have a pre-season peak, but consumers will expect a more robust promotional calendar that balances spending on technology, school supplies and clothing with purchasing cycles at different times throughout the year,” she said in a report.

Steiger also cited a shift in consumer attitudes around topics such as diversity and inclusion, as well as support for schools and teachers.

“Today’s consumers are making greater calls for authenticity, inclusivity and community-based support from brands and retailers,” she said. “When it comes to back-to-school, more and more retailers are doing their part to support the community at large through charitable giving programs that support teachers, students and schools in some way.”

Emerging digital platforms such as livestreaming and social commerce stand to grab an increasing share of the back-to-school market, according to Brittany Steiger, senior analyst for U.S. retail and commerce reports at research firm Mintel.

“The rise in e-commerce and digital shopping options has been a game-changer for busy parents, who enjoyed the convenience of shopping for school purchases from the comfort of home,” she explained.

Both retailers and brands have an opportunity to leverage livestreaming and social commerce as a way to supplement and add convenience to the in-store and online shopping experiences, Steiger said.

“The college market is especially ripe with opportunity for livestreaming and social commerce,” she noted, adding that Mintel’s research shows college students look primarily toward social media and their friends to guide their shopping choices.

“Retailers and brands should utilize short-form video platforms such as TikTok to initiate authentic connections with college students, perhaps inviting them to share their ‘move-in’ day shopping preparations,” Steiger said. “User-driven content puts students in the creator seat and enables them to connect with their friends and share the products and brands they are shopping as they head back to campus.”