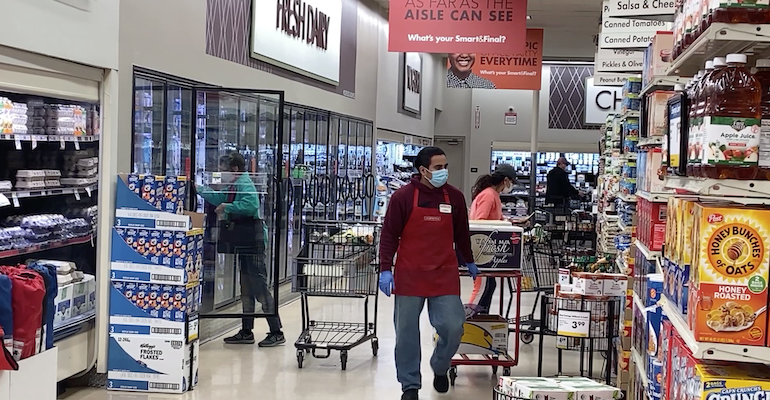 Sales at grocery stores edge up again in June

U.S. retail sales in June returned to growth after a prior-month dip, though grocery stores generated a smaller increase.

June U.S. retail and foodservice sales totaled $680.59 billion (seasonally adjusted), up by 1% from May and by 8.4% from June 2021, the U.S. Census Bureau reported in advance estimates released Friday. Retail trade sales — excluding motor vehicles and parts stores, gas and repair stations — rose 1% sequentially to $594.5 billion in June and were up 7.7% from a year earlier.

In May, overall retail sales were down 0.3% month to month but up 8.1% year over year. Retail trade sales, similarly, fell 0.4% sequentially in May yet rose 6.9% from a year before.

For May, grocery store sales advanced 1.2% from April and were up 8.7% from a year earlier, while food and beverage store sales gained 1.2% sequentially and 7.9% year over year. 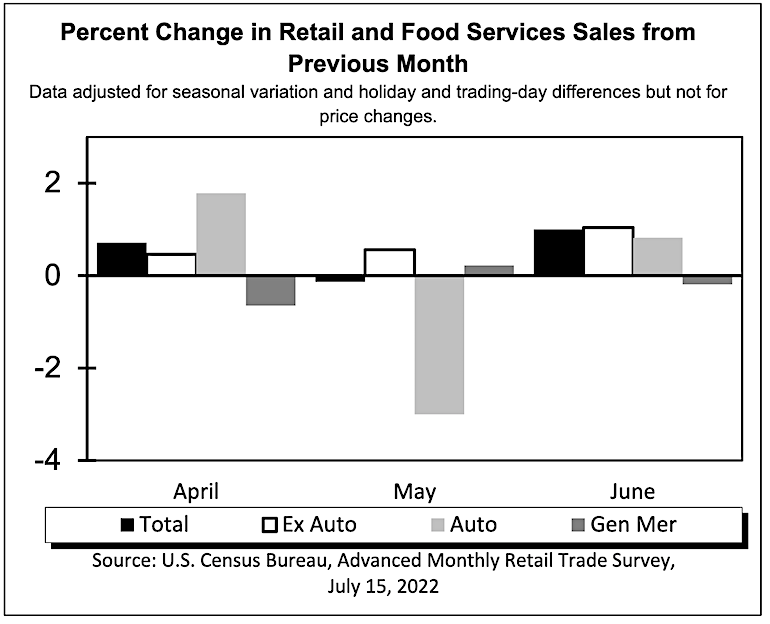 “Today’s retail sales numbers reveal how consumers are continuing to absorb higher prices in non-discretionary categories like gas and deferring purchases in categories like appliances,” stated Claire Tassin, retail and e-commerce analyst at data intelligence firm Morning Consult. “Declines in apparel and department store spending indicate that consumers are tightening their belts in some areas as they manage through this difficult period.”

In its retail sales report on Friday, the National Retail Federation (NRF) noted that shoppers kept up spending in June amid elevated inflation that hiked prices across the board.

On Wednesday, the U.S. Bureau of Labor Statistics (BLS) reported that the June Consumer Price Index (CPI) rose 1.3% month to month (seasonally adjusted) and 9.1% year over year, the latter marking biggest 12-month increase since November 1981. June’s food-at-home index climbed even higher, up 12.2% year over year and representing the largest gain since the 12 months through April 1979, according to BLS.

Washington-based NRF’s estimate — which excludes automobile dealers, gas stations and restaurants to focus on core retail — had June retail sales rising 0.6% on a seasonally adjusted basis from May and up 5.8% unadjusted year over year. In May, sales dipped 0.3% month to month but rose 6.3% over 12 months.

June sales gained in seven of nine categories on a yearly basis — led by online retailers, grocery stores and building materials/garden supply stores — and down in two categories month to month, NRF reported.

“June’s numbers show consumers are powering through price pressures, but inflation is eating away at savings built up during the pandemic and is wiping out recent income gains,” according to NRF Chief Economist Jack Kleinhenz. “Inflation remains a challenge to consumers trying to make ends meet and will continue to be an issue, even if it cools down in the months ahead. Despite that, consumers are holding up notably well and continuing to spend.”