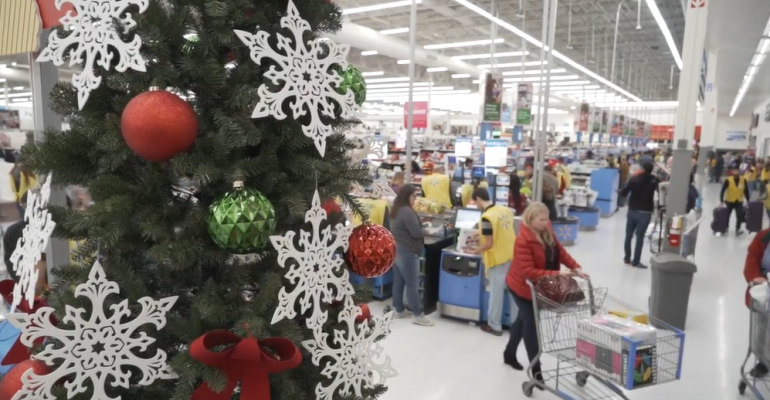 Related: Thanksgiving weekend shoppers will be keeping supermarkets in the mix

For the first time, Black Friday surpassed Cyber Monday as the busiest day for online, at 93.2 million shoppers versus 83.3 million. Next were Small Business Saturday at 58.2 million shoppers, Thanksgiving Day at 49.7 million and Sunday at 43.1 million.

NRF noted that the intermingling of in-store and online shopping swayed many of the 6,746 U.S. adults surveyed to make purchases after some hesitation. Free shipping was the chief reason, cited by 49% of shoppers (up from 42% last year), followed by the ability to order online and pick up in-store, cited by 20% (up from 15% last year). Other catalysts included limited-time sales or promotions (36% of shoppers) and an easy-to-use website or app (21%).

Digital again played a pivotal role in spurring holiday shopping and purchases. Of those polled, 39% said they looked to emails from retailers for information on deals and promotions, compared with 38% for print advertising circulars and 38% for online search. Mobile devices were used by 75% of shoppers to research products, compare prices or make purchases, up from 66% last year.

“The growth in online retail sales is a tide that lifts everybody,” Phil Rist, executive vice president of strategy at Prosper Insights & Analytics, said in a statement. “When consumers are buying from retailers online but picking up or making returns in-store, it is more and more difficult to distinguish between the sales retailers make in their stores and the ones they make on their websites.”

Department stores, visited by 50% of shoppers, were the top retail destination over the five-day period. Next were apparel stores (36%), grocery stores (34%), electronics stores (32%) and discount stores (29%). 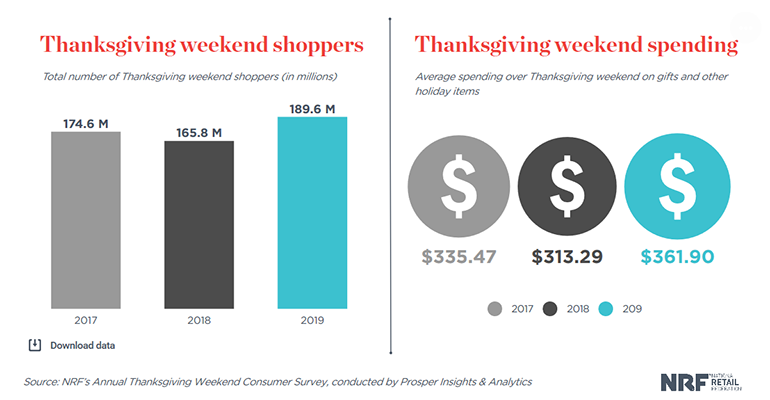 Black Friday remains “the biggest and best shopping day of the year,” according to Steve Bratspies, executive vice president and chief merchandising officer for Walmart U.S.

“Our customers found amazing savings with plenty of the most sought-after items available and the flexibility to shop the big event however they wanted, whether that was with our early deals online or in our stores on Thanksgiving night. Millions of customers joined us online and in stores across the country for our Black Friday event,” Bratspies said in a blog post.

“On top of the incredible deals, customers found it easy to shop for items on their wish lists with our updated Store Map available in the Walmart app,” he added. “And we saw a lot of shoppers saving time using Check Out With Me, an easy way to avoid lines and check out right in the aisles with our associates.”

The findings attest to the ongoing popularity of Thanksgiving weekend shopping, according to NRF, which noted that 56% of consumers polled in earlier surveys said they had already started holiday shopping as of the first week of November.

“Americans continue to start their holiday shopping earlier in the year, and Thanksgiving is still a critical weekend for millions. Whether they’re looking for something unique on Main Street, making a trip to the store or searching for the best deals from their mobile device, this is when shoppers shift into high gear,” NRF President and CEO Matthew Shay commented. “With the condensed holiday season, consumers are feeling the pressure to get their shopping done in time. Even those who typically wait until the last minute to purchase gifts turned out in record numbers all weekend long.”

Overall, NRF projects 2019 holiday retail sales (excluding automobile dealers, gas stations and restaurants) to grow from 3.8% to 4.2% year over year, totaling between $727.9 billion and $730.7 billion from Nov. 1 to Dec. 31. That gain compares with an average holiday sales increase of 3.7% over the previous five years, NRF said. Consumers are forecast to spend an average of $1,047.83 (including purchases made earlier) this holiday season, up 4% from a year ago.