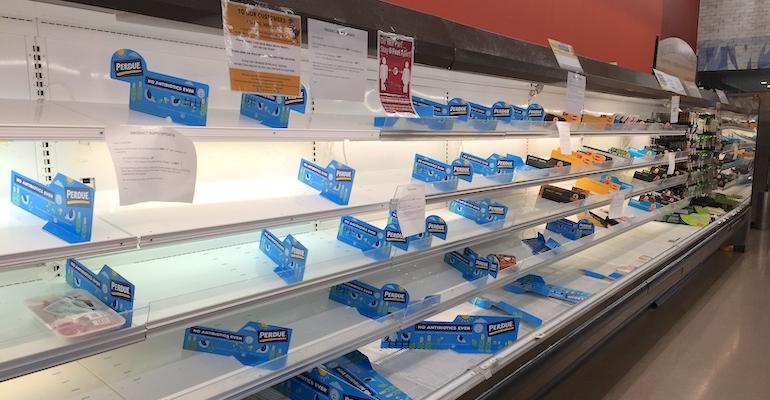 Russell Redman
Although customers anticipated finding empty grocery store shelves during the pandemic, that "doesn’t mean they were thrilled about it," ACSI said.
Issues & Trends>Consumer Trends

Shopper satisfaction with supermarkets fell during the first six months of the coronavirus pandemic, mirroring a trend across most of the retail sector, new research from the American Customer Satisfaction Index (ACSI) finds.

Among 100 major retailers across the supermarket, discount and department store, health and personal care store (including pharmacies), specialty retail and online retail segments, nearly 75% saw declines in customer satisfaction from April through September, ACSI said yesterday. The Ann Arbor, Mich.-based company’s special COVID-19 retail study was based on interviews with 30,787 U.S. consumers, who rated retailers by a score of 0 to 100 on a range of service criteria. 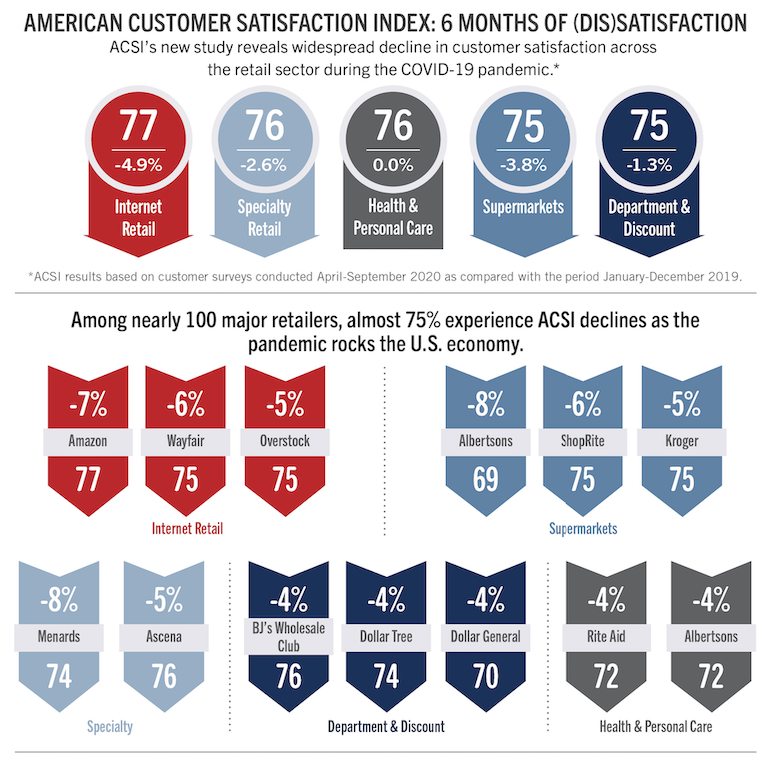 Discount and department stores — including mass merchants, warehouse clubs and dollar stores — rated at 75, a 1.3% dip from last year. Specialty retail stores had an overall score of 76, down 2.6% from 78 for 2019.

The only retail segment not seeing a decrease was health and personal care stores, which includes drugstores and in-store pharmacies. For the April-September pandemic period, the sector posted a score of 76, unchanged from its rating in 2019.

“From the onset of COVID-19, consumer expectations of retailers took a massive hit,” according to David VanAmburg, managing director at the ACSI, a national economic indicator developed at the University of Michigan. “Customers braced for delayed packages, empty grocery store shelves, and hard-to-find name brands. Of course, just because they expected this, doesn’t mean they were thrilled about it.”

Among supermarkets and other grocery retailers — whose ACSI score last year was unchanged — Trader Joe’s and Wegmans Food Markets earned the top ratings from customers surveyed during the pandemic period, with both chains scoring 84, the same as in 2019.

The only other supermarket retailer not experiencing a decline was Save-A-Lot, which rated at 75 for customer satisfaction in the COVID period, repeating its overall score for 2019. ACSI said Albertsons Cos. score of 69 for April to September, down 8% from the retailer’s 2019 rating of 75, represented the first time a supermarket scored in the 60s since 2015.

“The effects of the pandemic on retail are especially pronounced in supermarkets. Aside from checkout speed, which remains steady at 76, all other customer experience benchmarks decline,” ACSI explained. “Keeping shelves stocked has been a major issue for the industry, with inventory sinking 6% to 75. Customers aren’t seeing many sales and promotions, and they’re uninspired by the number of locations.” 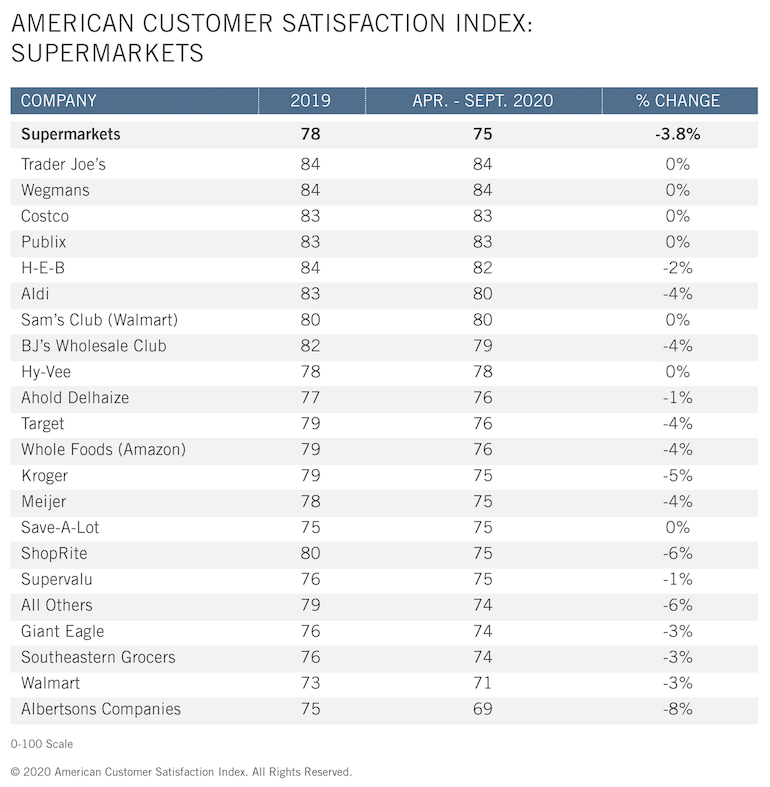 Costco turned in the highest ACSI score in the discount and department store category, with a rating of 81 for the six-month COVID period. Still, that marked a 2% falloff from the wholesale club chain’s 2019 score of 83.

For drug retailers, shoppers rated the customer experience during the coronavirus crisis as essentially the same, according to ACSI. Survey respondents cited such improvements as a faster checkout process (up 1% from 2019 to a score of 77 ) and better mobile app reliability (up 2% to 83) but noted decreased availability of name-brand products (down 1% to 78).

“As customer satisfaction slips, retailers must adapt to the new market,” VanAmburg added. “It’s clear they have their work cut out for them.”