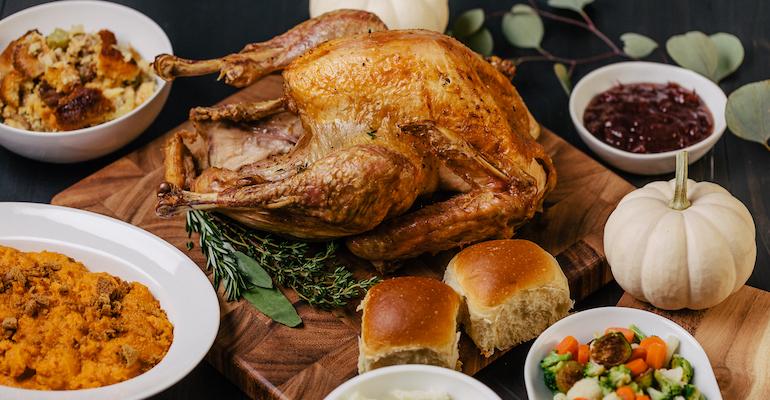 Gelson's Markets
Despite the COVID-19 crisis, 83% of consumers polled by NCSolutions think it’s as important or more important to celebrate Thanksgiving this year.
Issues & Trends>Consumer Trends

Almost 75% of Americans plan to spend the same or more, with 80% shopping at stores

This year, nearly three-quarters of U.S. consumers aim to spend the same or more as last year for Thanksgiving items, with more than 80% saying it’s important to celebrate the holiday in spite of the COVID-19 pandemic, a survey from NCSolutions (NCS) finds.

New York-based NCSolutions, which specializes in advertising efficacy, noted that the coronavirus crisis doesn’t appear to be dissuading shoppers from purchasing their Thanksgiving goods in stores, as 80% of those surveyed said they plan to shop that way. Nineteen percent indicated they would buy online for delivery, while 15% aim to use curbside pickup. Consumers were able to choose more than one purchasing method in the poll. 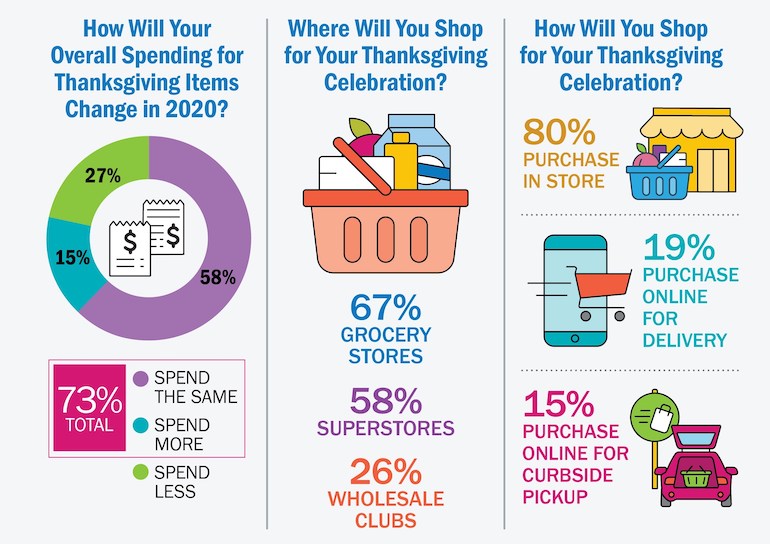 In terms of the shopping venue, 67% respondents said they plan to do their Thanksgiving shopping at grocery stores, 58% at superstores and 26% at warehouse clubs. And the pandemic doesn’t appear to be shifting the timing of their Thanksgiving meal shopping. Sixty-five percent report they will start “turkey day” shopping at the same time as last year, compared with 26% saying they’ll begin earlier and 9% planning to shop later than last year.

“The big takeaway for CPG advertisers is that Thanksgiving isn’t canceled. Holidays are holidays even as the pandemic continues. As we’ve seen during this pandemic around other holidays, spending has increased, since celebrations represent a bit of normalcy and remain important to consumers,” according to Linda Dupree, CEO of NCSolutions.

“Historically, our data shows a 7% increase in household grocery spending in the weeks prior to Thanksgiving,” she explained. “We are currently observing household spending on groceries to be up 24% compared to the same time last year. While the COVID-19 pandemic has been a great disruptor for many things, all indicators point to Thanksgiving 2020 being an important facet of the fabric of American family.” 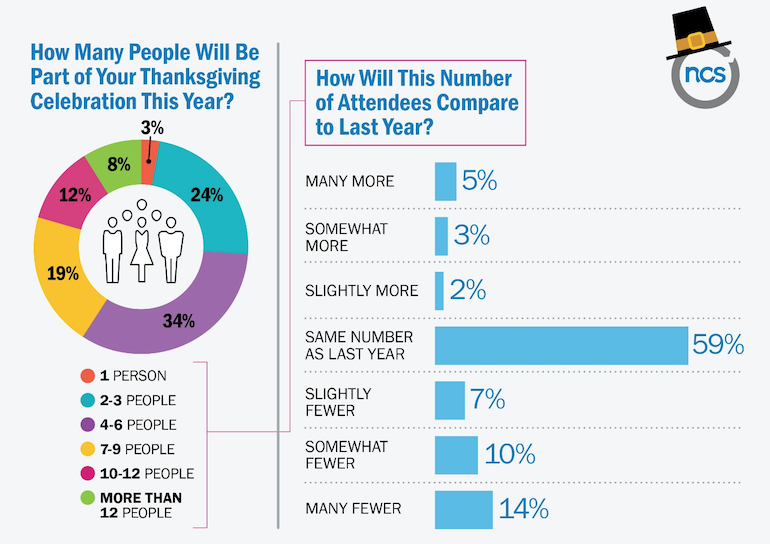 Just 12% of respondents said they have no plans to celebrate Thanksgiving this year. Of those with holiday plans, 56% plan to celebrate at home, 25% at a relative’s home, 5% at a friend’s house and 2% at a restaurant.

Social distancing is playing a role as Americans plan their Thanksgiving Day festivities. Ninety percent of consumers plan to celebrate Thanksgiving indoors versus 10% saying they’ll move their celebration outdoors. Sixty-one percent reported they will celebrate with people who don’t live with them, while 39% said their holiday meal will only involve household members. Thirty-four percent expect four to six people, and 24% said their gatherings would include only two to three people. Just 12% expect a larger crowd of 10 to 12 people.

Compared with Thanksgiving 2019, 31% of those polled will have somewhat fewer or many fewer people at the table this year, while only 10% say their gatherings will be larger. Fifty-nine percent expect the same number of guests at their Thanksgiving table. 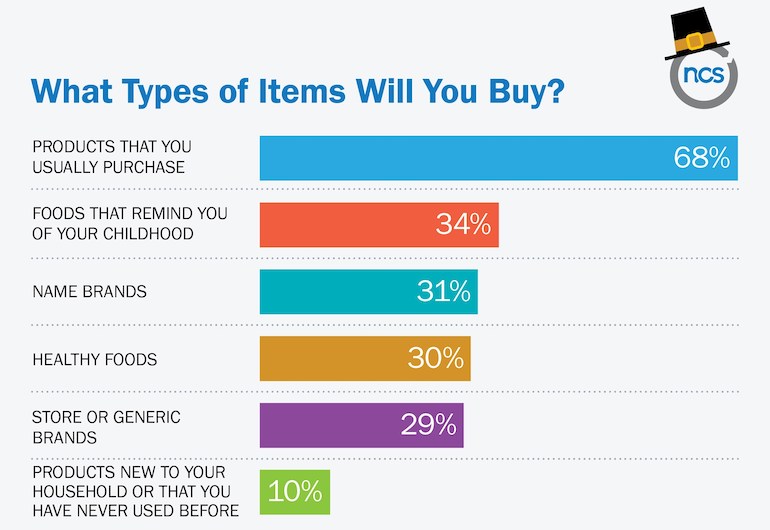 “With more Americans putting greater emphasis on Thanksgiving, the combination of the same number or fewer guests and holiday spending the same or growing should translate to an increased number of smaller gatherings and more shopping,” commented Lance Brothers, chief revenue officer at NCSolutions. “The practical impact of these converging factors provides an increased opportunity for advertisers to promote their brands and expand audience targeting efforts to reach American shoppers.”

Regarding their Thanksgiving shopping list, 68% of respondents said they plan to buy the holiday items they usually purchase, compared with 10% looking to buy new items. Thirty percent aim to purchase national brands versus 29% opting for store/generic brands. Healthy foods will be on the Thanksgiving list for 30% of consumers, and 34% said they’ll purchase foods that “remind you of your childhood.”