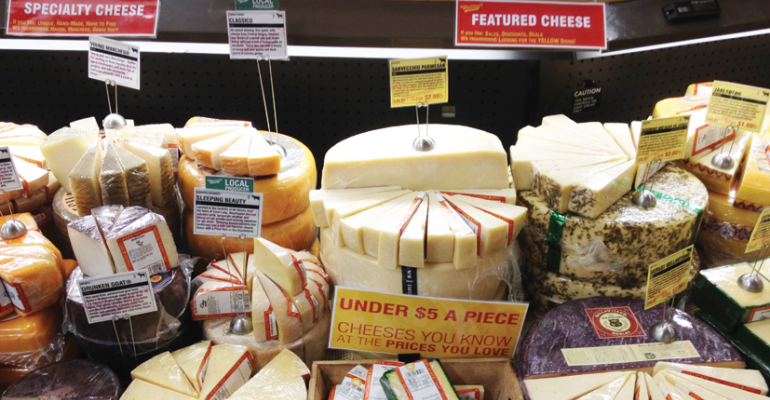 Retailers are turning the spotlight on artisan cheese,&nbsp; adding value, and finding that sometimes less is more

Whether it’s pairing cheese with wine or apricots, or cutting smaller wedges of Beemster to lessen sticker shock, supermarket retailers are adding value to the cheese case.

When value-added cheese is mentioned, nut-crusted cheese balls or salmon and Brie pinwheels may come to mind, but that’s not all that’s going on.

“It used to be that value-added anything meant something had been added to the product, maybe more of what it already had — like calcium — but that’s changed,” Melissa Abbott, senior director, culinary insights, at Bellevue, Wash.-based The Hartman Group, told SN.

“Now, it [value-added] can mean freshness or convenience.” At least, that’s consumers’ perception, she said, and that counts for a lot.

“The Murray’s within Kroger stores have a bin with small pieces of cheese individually wrapped, and at a nice price,” Abbott said. “Just a few ounces — maybe two ounces or less. That’s for discovery, which consumers love. They’re excited about trying new flavors.”

The smaller wedges or slices enable customers to try a variety that’s new to them without spending a lot of money, and they also might buy several varieties and create their own cheese plate.

“Of course, we let customers try any cheese [at the service counter] before they buy it, but the bin of wrapped pieces priced at a couple of dollars each gives them convenience,” Siegelbaum said. “They’re all less than a quarter pound,” and they’re self-service.

Murray’s Cheese Shops — legendary in New York — struck an agreement nearly five years ago with the Kroger Co., Cincinnati, to install full-service Murray’s Cheese Shops within selected Kroger stores. By now, they have their shops in 73 Kroger-owned stores across the country.

In those shops, Murray’s-trained Kroger associates stage tasting events, and pairings with fruit and with wines and beer on a regular basis.

And freshness is made obvious.

“Our shops are cut-and-wrap shops,” Siegelbaum said, emphasizing that there’s a lot of action —such as cracking wheels of Parmigiana Reggiano and slicing big hunks of imported Gouda — going on in front of the customer. All of that speaks of freshness — and incidentally creates some drama.

At New York-based Fairway Market, the chain’s executive vice president Steven Jenkins said his upscale selection of cheeses and accoutrements speaks for itself. Everything is fresh and mostly unadorned.

“We shred and cut cheese fresh all the time,” Jenkins said.

“We also have some ‘little cherries’ of marinated mozzarella, and bulk pot cheese in pound containers.”

But Jenkins doesn’t go for a lot of things other cheese sellers do to their products.

“Unless the end result is really, really good, I discourage my department managers from doing the striving, cutesy stuff… it all gets on my nerves.”

In its own bow to freshness, Kings Food Markets, Parsippany, N.J., on special occasions, makes fresh mozzarella at the store using fresh curd from its local supplier.

“Customers typically ask for various sizes and shapes [of fresh mozzarella] for certain recipes,” Zoeller added. “The perline, pearl size, for example, is perfect for salads or pizza.”

Kings, in some of its stores, has experienced cheese mongers who cut and shred any of its artisan cheeses to order, and the company, like other retailers, also has found there’s a demand for small wedges and slices.

“We often find that many customers want to try several different types of cheese in much smaller sizes.” Zoeller said.

Packaged-in-store cheese plates are becoming a common sight in the self-service case in artisan cheese departments.

Abbott at The Hartman Group said she’s been noticing several supermarkets assembling tiny plates with a variety of cheeses in small wedges.

“Sometimes, people are nervous about making up their own cheese plates because they’re not sure what goes with what,” Abbott said.

“Trader Joe’s is a leader in that [small cheese plate] format. They feature a sampler plate; they call Spanish Cheese Tapas. It’s a little over five ounces total, and it’s $3.99.”

Abbott and others in the industry said the trend toward smaller cheese wedges feeds right into the already full-blown snacking trend.

“I’m seeing small  medallions and sticks of goat cheese. Familiar items in new formats for the convenience of it,” Abbott said.

Anne Terrien, assistant to executive director Carol Christison, at Madison, Wis.-based International Dairy-Deli-Bakery Association, said she and her colleagues have noticed the “smaller” trend has gained traction in supermarkets.

“We sell wine in-store at our Short Hills location, so select red wines from Italy are merchandised there with a variety of cheeses,” Kings’ Zoeller said. “White wines and rosés are typically paired with semi-soft brie and goat cheeses. Additionally, we are beginning to experiment with cheese and beer pairings, including aged cheddars, aged Gouda and gruyeres.”

At Kowalski’s Markets, St. Paul, Minn., pairing is done via product card. The 9-unit independent previously indicated on product cards what type of milk a particular cheese was made from. Now, the card also shows what beverage the cheese pairs best with.

“We had little symbols of goats, and sheep and cows in the upper right corner of the cards,” Terri Bennis, Kowalski’s vice president, perishables operations, said in an earlier interview. “Now, we’ve added a little bottle of red wine or white wine or a beer bottle symbol in the lower left corner of each.”

At Super Foodtown Stores, owned by Food Circus, Middletown, N.J., a Cheese of the Month program features a particular variety of cheese at a significant discount.

The program isn’t new, but it has gained momentum over the years, said Patti Rispoli, the independent retailer’s deli supervisor, who also has responsibility for buying and merchandising cheese for the 10-unit chain.

“We usually bring the retail price down by about 20% for the Cheese of the Month,” Rispoli said.

She described other programs that she considers add value to the company’s cheese selection.

“We also tie into the seasons. For instance, we’ll run cheddar in the fall when apple season is here, and fresh mozzarella in August at the height of tomato season. At those times, we may put up a secondary display with large signs.”

The company makes good use of POS materials provided by the Wisconsin Milk Marketing Board on its cheese displays, Rispoli said. The stores also make frequent live  announcements over their public address systems, telling customers what is being featured in its international cheese department.

Rispoli believes though that the best tactic to add value to cheese or any  product is a staffed demo.

“When you’re face-to-face with the customer and you get them to taste the product. Sales go just one way — up.”

A demo gives the retailer an opportunity, too, to show off the knowledge its staff has to offer.

According to Alan Hiebert, senior education coordinator, at IDDBA, a knowledgeable staff is one of the best values there is to add to an artisan cheese department.

“IDDBA believes that whatever cheese merchandising technique a store chooses, a knowledgeable staff is of the utmost importance,” Hiebert said.

There are those customers, however, who know what they want and want to get in and out of the store quickly.

And, in fact, some of  IDDBA’s research shows that next to price, convenience is most important to consumers.

Cheese sales in the dairy case have retailers smiling
Dec 23, 2021