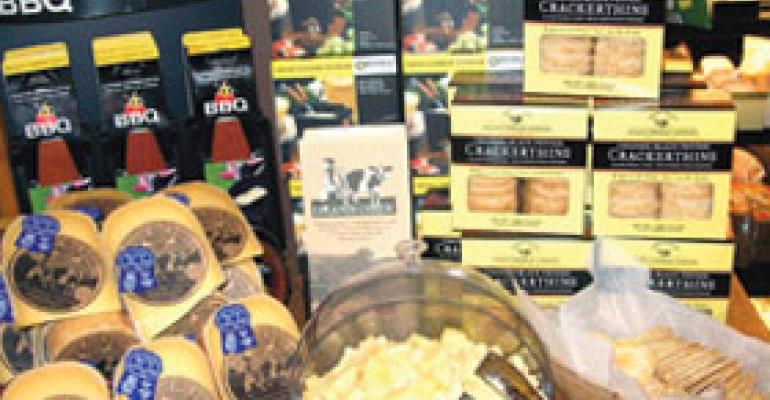 CURD IS THE WORD

With interest in artisan and specialty cheese growing, retailers are making new efforts to put sales into over-drive

Sales of artisan cheese have stayed strong during gloomy economic times, and supermarket retailers are gaining new respect for the category and looking to give it its due.

Cheese clubs, more demos, pumped-up variety and advertising, the introduction of whole lines of private-label artisan cheese, innovative cross-merchandising and pairing. Those are just some of the things happening right now.

Hy-Vee, West Des Moines, Iowa, has launched a new, companywide effort that includes the launch of cheese clubs, expanded space for specialty cheese, the debut of service cheese counters and a schedule of demos that has been tripled in frequency.

That's in the Midwest where much domestic artisan cheese is made, and customers are sold on “local,” but new attention to the category is not confined there. It's all across the country.

And Barrie Lynn, “The Cheese Impressario,” who works with retailers to increase sales, told SN that Bristol Farms is a pacesetter when it comes to sampling, cross-merchandising and doing a whole lot of interesting things with artisan cheese to keep customers interested. Especially when it comes to pairing cheese with wines and nuts and honey, and even artisan breads. Seven-day-a-week demoing is part of the Bristol Farms strategy, she said.

“When it comes to promoting cheese, it's easy. Sample, sample, sample,” Ferranda said. “We make sure we have a minimum of two samples a day on our sales floor.”

He described some recent demos.

“Adding condiments like honeys, fig cake, mustard sauces from Italy and quince paste from Spain are great ways to add dollars to the cheese department's ring during a demo. This is where we excel.”

Cross-merchandising cheese in other departments, too, is an everyday happening.

“Cross-merchandising in the right area, whether it be Piave merchandised at the front door with apples, or Burrata alongside heirloom tomatoes, we like to take advantage of all the opportunities available. Reaching out into other areas [of the store] … will add to the bottom line,” Ferranda said.

Meanwhile, across the country in Florida, Tampa-based Sweetbay Supermarkets is taking advantage of working with the Wisconsin Milk Marketing Board to merchandise artisan cheese. As the Tampa Bay Buccaneers kick off their schedule of home games, tailgate promotions are the thing at Sweetbay's hundred-plus stores.

“We use ideas from the marketing board's ‘Tool Box’ [promotions kit] and just came off a ‘Build a Better Burger’ promotion that was successful,” said Eddie Garcia, Sweetbay's director of operations.

Garcia attributes the category's growth, in part, to The Food Channel and to the fact that people are cooking and entertaining at home more often. Recent success with specialty/artisan cheeses has spurred Sweetbay to ramp up its efforts.

“The end of last year, we took two new approaches. We created a little more structure with our sets, tried to balance having an artistic look and a planogram look,” Garcia said. “It's great to have these wonderful-looking cases but it's sometimes difficult to maintain. So, we began tagging our cases and created focal points to highlight a cheese event. In the second approach, we began using cheese in other departments to help cross-merchandise.”

“Customers love that. It's the thrill of the hunt.”

The economy hasn't hurt specialty cheese sales. Indeed, the company ended 2010 with a positive 1% growth in cheese sales, and currently is running 5% up in sales and more than 4% up in volume movement year-to-date, Garcia pointed out.

“I think specialty cheese is not only a growing category, it has unlimited potential.”

The chain's confidence in the future of the category is underscored by its launch this summer of 30 varieties of cheese under its premium private label, “Taste of Inspiration.”

Another chain in the South, Charleston, S.C.-based Piggly Wiggly Carolina, with more than 100 stores, is continuing to shine the spotlight on specialty cheese in its highest-traffic stores.

“An important part of that is training, getting our people knowledgeable about cheeses so they can talk to our customers about them,” said Craig Inabinett, the chain's director of deli and bakery operations.

Like Sweetbay, Piggly Wiggly Carolina has been working closely with the Wisconsin Milk Marketing Board.

“We've been doing in-store training with small groups, using the WMMB training guide and videos, and we've sent more people than we ever have to tour Wisconsin cheese makers' operations,” Inabinett said. “We sent 30 of our people from 20 stores on one of the tours this spring, and now, the last of this month, we'll be sending 11 of our deli people on a marketing board-sponsored tour.”

This past March, the company increased its sampling schedule with the help of its distributor, Atlanta Foods International.

“Andrea Yelton from there has been helping with pairing and getting our associates involved.”

The chain's specialty cheese sales were up 4% this spring over a year ago, and Inabinett said he expects the growth to continue, thanks to a combo of knowledgeable associates, POS materials, ads and longer promotions. He also has almost doubled active sampling in selected stores.

One of the biggest and most recent pushes to increase artisan and specialty cheese sales has been undertaken by Hy-Vee.

“When we opened our first store in Wisconsin in 2009, we took the opportunity to reach out to small and large artisan cheese makers in the area. We wanted to have the best cheese department in the cheese state,” said Ruth Comer, assistant vice president of media relations for the 233-unit chain.

“We expanded our selection of cheeses at Madison and some of our other stores, and since then, have sent many of our people [from other Hy-Vee stores as well as from the Madison unit] on cheese tours here in the state.

“We've begun pairing cheeses throughout the store, in produce, bakery, the meat department.”

In addition to starting a monthly cheese club featuring informative discussions, recipe ideas and pairing suggestions (see “Join the Club") Patrick Tinder, deli manager for the Madison location, said that he has increased the frequency of live demos significantly with the help of his distributor, local cheese makers and the Wisconsin Milk Marketing Board.

“We've had Sartori Foods [a Wisconsin cheese maker] here several times, and we have them scheduled for a couple of dates in September.” Other local cheese makers are on the schedule as well.

“It's our goal to have a live cheese demo three days of the weekend, every weekend,” Tinder said.

“Retailers understand that the U.S. consumer is still learning about fine cheese, and the fastest way to overcome the purchase barrier is to actively sample the cheese with consumers in-store,” Vincent said. “We work with retailers to sample, sometimes using their demonstration teams, but often we use our own sales and marketing team, or local experts to run the events in-store for them.”

The Madison Hy-Vee has gone all out, cutting 80 different wheels of cheese on a weekly basis. The store boasts a selection of more than 400 varieties, 250 of them made in Wisconsin.

“Hy-Vee has been very proactive [with artisan cheeses]. They see the direction the consumer is taking,” Beth Crave, Crave Bros.' customer service manager, told SN. “This year, we had the first Hy-Vee tour of our facility.”

The company has been focusing on the category outside of Wisconsin as well. At a Hy-Vee store, opened in July in Kansas City, Mo., the company has installed its first service cheese counter. “It's doing great. It was amazing to see how cheese sales grew,” Store Director Lee Wawiorka said.

The location is a replacement store, and the former location had only self-service specialty cheese. Now, six associates are dedicated to the counter, where they cut and wrap cheese and talk to customers. The service cheese counter runs about 30 linear feet, positioned between deli and bakery. And, this Hy-Vee store, too, has started a cheese club.

“From self-service to this counter — which is staffed from 8 in the morning till 8 at night — sales more than quadrupled,” Wawiorka said.

All the recent attention at Hy-Vee has been customer-driven, officials said, and that holds true elsewhere.

Melissa Abbott, director of culinary insights at The Hartman Group, Bellevue, Wash., said that more savvy retailers are now viewing the specialty and artisan cheese category as a must.

“When the eponymous Murray's Cheese of NYC opened kiosks inside of select Kroger stores, you know [artisan] cheese has hit mainstream,” Abbott said.

“As food theater, cheese departments can really dial it up. We see this at places such as [H-E-B] Central Market in Texas, with their in-house mozzarella making for all to see.”

Kowalski's Markets, St. Paul, Minn., has also revved up its fresh mozzarella-making program. Last year, just a couple of stores were making mozzarella in-store, but now all are, said Terri Bennis, Kowalski's vice president of perishables. And the company holds hands-on classes to show customers how to make their own fresh mozzarella.