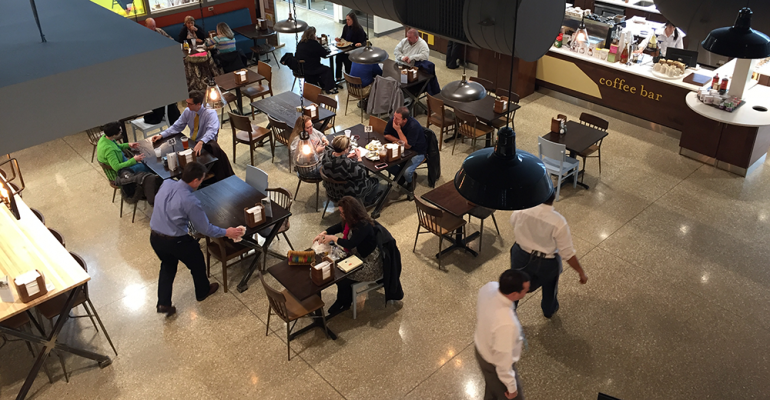 Many food items find their way from the Harvest Market retail shelves to the store’s Farmhouse Restaurant menu.
Product Categories>Deli

Some food retailers are finding synergies between their prepared food offerings and the retail products they carry by focusing on unique opportunities for cross-promotion that enhance their overall brand image.

At the Farmhouse Restaurant inside Harvest Market in Champaign, Ill., for example, foodservice and retail are closely tied together through the use of locally produced retail items as ingredients that are called out on the menu or by the restaurant staff.

“I think that there’s a great synergy there,” said Gerry Kettler, director of consumer affairs at Quincy, Ill.-based Niemann Foods, parent of Harvest Market. “There’s a very, very unique relationship between all of the producers and makers and what goes on in the restaurant, and it includes the store.” 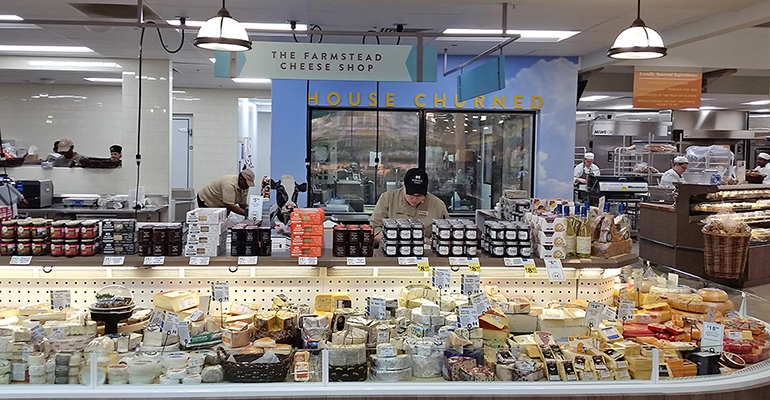 Harvest Market is known for the butter it churns in-house, for example, using cream from Fairbury, Ill.-based Kilgus Farmstead, a local dairy. The buttermilk biscuits offered in the restaurant are made from a byproduct of churning the butter, Kettler explained. Similarly, eggs from Saunemin, Ill.-based Little Farm on the Prairie are also featured as a local item both on the menu and in the retail case.

Several other items are also finding their way from the Harvest Market retail shelves to the Farmhouse Restaurant menu, including local produce in soups and sauces and, most recently, in the form of vodkas infused with organic produce from the store.

Farmhouse has also worked with local cheese producers who supply the retail cheese department to come up with ideas for grilled cheese sandwiches and other menu items in the restaurant, said Kettler.

Specialty items on the menu

At Foragers Market in New York, Dan Rothman, culinary director, has incorporated some specialty food items into the menu of the in-store restaurant there. Cross-utilized items include a hops-infused salt that has been featured on the retail shelves and is used in a few dishes in the restaurant. It has gained some notoriety through its use on the rims of glasses of micheladas in the bar, he said.

“From the producer side, it’s really a great opportunity, because I don’t know how quickly a new product to market like this would sell off the shelf,” said Rothman.

Small producers also often have the flexibility to create specialized packaging for foodservice, he explained. The salt supplier, The Brew Chef, retails its HopZalt product in 6-ounce jars but developed 1- and 2-pound bags to accommodate demands of the foodservice channel, Rothman said.

Foragers is also working with local producer Monty’s NYC, which makes a vegan alternative to cheese called Cultured Cashew Wheels, to feature the product in the restaurant.

Beverages such as local beers and sodas also offer strong opportunities for cross-promotion in the foodservice area of the store, retailers said.

“You can offer [foodservice customers] some gateway to a product, either through awareness or through discounting,” he said.

And the synergies work both ways, Shaye explained. He described using coupon-generator Catalina to trigger a coupon offer for a fresh pizza from the foodservice area whenever a customer purchased a frozen pizza, for example.

Promoting seasonal produce in the foodservice and deli/bakery areas can be another effective cross-promotional strategy, he said. For example, he suggested offering a specific peach variety in the produce department while promoting it in whole peach pies and cobblers in the bakery and by the slice in foodservice.

“For menu planning, I recommend leveraging all departments in a supermarket to drive home the freshly prepared message of foodservice,” said Shaye. “By working with multiple departments, one plus one equals three, and if you're not taking advantage of all of that, you're leaving something on the table.”

Department silos are always an obstacle in the food retailing industry when it comes to cross-promotion, but they can be overcome, he said.

“It takes collaboration, it takes thought, and it takes planning. It's all of those things together in unison,” said Shaye. “But if you do that, and talk about it, you can add tremendous value to the offer.”