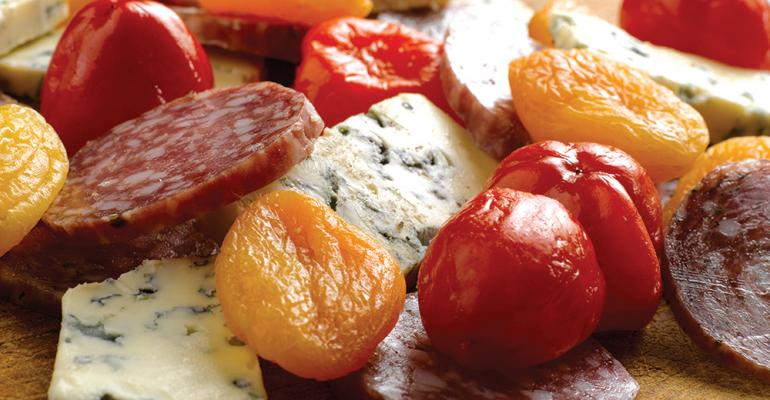 As more and more consumers eschew traditional mealtime habits in favor of all-day noshing, they are seeking the same level of quality and freshness from their snacks that they demand from other prepared foods.

“There’s definitely an increase in demand for little bites to eat,” he said.

One product in the chain’s Our Kitchen line of prepared foods that fits that bill are the “salad toppers” that Roche Bros. merchandises alongside its prepackaged salads. The small containers, which sell for about $2.50 to $3, include varieties of shrimp, chicken, steak tips, hard-boiled eggs and other proteins that are designed for either combining with a salad or eating as standalone snacks.

“It allows people to get a quick bite of protein on the go, without spending a lot of money,” said Laliberte. At its acclaimed Downtown Crossing store in Boston, Roche Bros. also merchandises a variety of grab-and-go charcuterie snack plates (pictured) designed for one or two people, containing sliced meats such as prosciutto, along with bite-sized cheese pieces and pickled vegetables. The plates are displayed in the cheese department.

The items are similar to a new line of cheese-based fresh snacks that wholesaler KeHE Foods has rolled out to about 50 retailers, said Amber Mahin, director of marketing and merchandising at KeHE’s Monterrey, Calif., fresh foods division.

The 4-foot snack sets are located within the retailers’ specialty cheese cases and contain such items as cheese squares, salami and cheese roll-ups and Brie with crackers.

“They have proven to be very popular,” said Mahin.

“The trends we are seeing are fast, fresh and healthy,” she said. “People are eating smaller meals and meals with less calories.”

“They are looking for healthy salads and things like cheese and fruit,” he said. To accommodate nutrition-minded snackers, Doc’s, which operates nine stores under the Apple Market, Country Mart and JB’s Market banners in Oklahoma, merchandises snack-sized containers of cubed cheeses with toothpicks, said Erdogan. The containers include about six to 12 small cubes of cheese of mixed variety, such as manchego and Jarlesburg.

The items are merchandised along with sandwiches and other prepared foods in the grab-and-go coolers found on the sales floor of every store.

“I am trying to look at things like incorporating sliced apples from the produce department with cheese, but we haven’t found the right packaging yet,” he said.

At Libbie Market in Richmond, Va., co-owner Sam Dortch said he’s had success merchandising deli salads, such as tuna or chicken salad, in 2- or 3-ounce containers for customers on the go.

The Austin, Texas-based retailer typically merchandises single-serving packages of deli salads and house-made beverages, such as flavored waters, near the hot and cold food bars, he explained.

Other grab-and-go snacking innovations Raduns said he’s seen include small packages of three slider-sized sandwiches — one ham, one turkey and one beef, for example — that satisfy consumers’ interest in freshness and variety. Although consumers are less constrained by traditional norms about which foods are appropriate for specific dayparts, changing up the snack display throughout the day can help drive sales, he said.

“Your biggest opportunity is to have the right items there at the right time,” said Raduns. “I would suggest that the labor involved in either resetting a case or spreading out on those daypart-relevant items is worth the while.”

Deli snacks account for a relatively small portion of retailers’ sales — only 2.2% of total dollar sales last year — but are growing quickly, according to the International Dairy Deli Bakery Association’s What’s in Store 2017 report. Dollar sales were up 7.9% over a year ago, the report found.

Supermarkets are often competing against convenience stores when it comes to grab-and-go snacks, according to Jonathan Whalley, education coordinator at IDDBA, and they have the opportunity to differentiate themselves from the c-store crowd by providing fresh, healthful snack options that are packaged and merchandised for customer convenience.

“Only 16% of c-store shoppers strongly agreed that healthy snacks are currently easy to find,” said Whalley. “The in-store deli is certainly in a position to offer a wide variety of healthy snacks, made fresh, and rotated frequently enough to drive return visits.”

The challenges retailers face in merchandising grab-and-go snacks are similar to the challenges they face with other prepared foods — maintaining fresh displays while minimizing both shrink and empty shelves.

“Shoppers are looking for convenience, but when there is so much competition for quick, convenient snacks, it’s even more important,” said Whalley. “Consider how quickly shoppers are able to locate and purchase snack items after entering the store.”

Many retailers are also merchandising snack-sized charcuterie packs and other fresh snack items directly from their suppliers. Both Whole Foods and Fairway Market stores in New York, for example, merchandise snack-sized, branded packages of sliced meat and cheese, sometimes with crackers, in multiple locations in their stores.

At Doc’s Food Stores in Oklahoma, Erdogan said he’s planning to roll out new snack-sized containers of hummus and guacamole with pretzels from Sabra in the coming weeks. The items will likely be merchandised in multiple locations, including the grab-and-go cooler and in the produce department.

Another packaged deli item that has been gaining traction is single-serve pickles.

At Libbie Market, Dortch said he recently rolled out packages of Dilly Bites sliced pickles from Oh Snap! in the grab-and-go sandwich cooler, and the product has been a good seller.