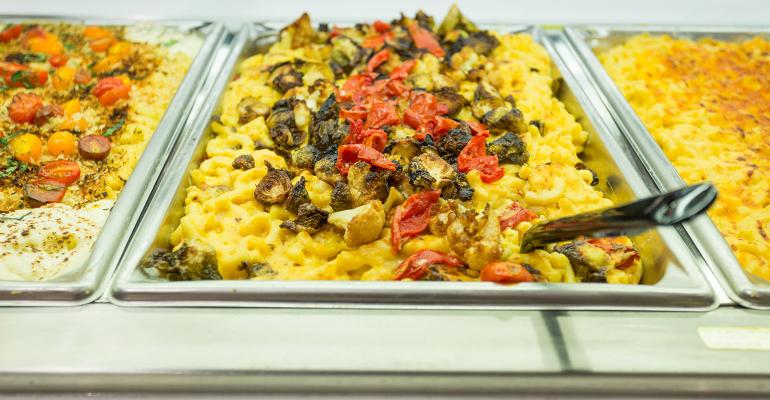 Georg Beyer
Whole Foods mixes “crunch, zest and an herbaceous zing” into the 15 dishes it rotates in the mac and cheese bar at its Union Station store in Denver.
Product Categories>Deli

It’s all about experimentation. Grocers across the U.S. are trying to boost lunch sales by launching new programs, products and approaches. They’re adding more foodservice options and grab-and-go items for shoppers racing back to the office. They’re also trying to create better in-store experiences for those who have time at midday to linger over lunch.

This comes amid unprecedented competition from all manner of eateries like Shake Shack and Sweetgreen, quick-service restaurants and even convenience stores. “There is an opportunity to take some of those sales back,” said Randy Burt, a partner in the Consumer and Retail practice of A.T. Kearney, a global strategy and management consulting firm.

Supermarkets “have to think creatively and see what takes hold,” Burt noted. Prepared meals are growing two times as fast as the rest of the store, he said, adding that major retailers are still looking for the right recipe for lunchtime success. “It’s going to be critical to make sure you are getting quality perception and you are able to merchandise in a way that is really attractive,” he said.

The new Whole Foods Market in historic Union Station in Denver, opened in November, features a mac and cheese bar that is exclusive to that store. Among the 15 rotating offerings: “Cheesy, gooey, goodness with chef-inspired recipes like peppered bacon and blue cheese, pancetta with roasted tomatoes and fried herbs, BBQ pulled pork, and even lobster,” according to a blog post by Evan Hubbard, creator of the mac and cheese bar and associate coordinator of prepared foods in the retailer’s Rocky Mountain Region.

The choices, at $9.99 per pound, include a vegan version and a variety of toppings to add “crunch, zest and an herbaceous zing,” Hubbard wrote.

The mac and cheese bar has been “incredibly popular and an instant fan favorite for Denverites,” said Heather Larrabee, executive marketing coordinator for the store. The retailer has experienced lines wrapping around the hot bar and has had to add inventory to accommodate demand. Roughly 10% of opening day sales came from the bar, Larrabee said.

For now, there are no plans to roll out mac and cheese bars nationally, said a Whole Foods spokesman. Foragers Market is banking on new and expanded lunch offerings to stand out from the competition and increase already healthy lunch sales, Culinary Director Dan Rothman said during a recent tour of the retailer’s flagship, industrial- chic store in Brooklyn. Rothman joined Foragers last spring from Whole Foods Market. His position is new. Foragers has three units, including a small satellite in DeKalb Market Hall, a 40-vendor food hall in Brooklyn that opened last spring.

Until recently, the flagship offered one hot food selection on its 40-item salad bar. Now there are two, with plans to expand to six. An instant hit: macaroni and cheese made with New York state cheddar, Foragers’ private label Italian pasta and imported Parmesan cheese. All items sell for $9.99 per pound, a recent increase from $9.75 per pound.

Also in the works are more grab-and-go lunch items including more vegetarian sandwiches and prepacked salads. Now, salad sales slightly outpace sandwiches, which continue to be a big draw for their store-prepared meat fillings; customers can watch staffers break down a pig while they’re waiting for their lunch order. Prices are $10 to $12 for choices such as sardines and bacon jam on focaccia, and roast turkey with cheddar, sliced egg and store-made bacon honey mustard sauce on a baguette.

Prepared foods are such an important part of the lunch mix, representing 70% of sales, that the retailer is looking to expand the salad bar and contract center store space. “Prepared foods margins are better even though the labor is higher,” Rothman said.

Carson, Calif.-based Bristol Farms, with 13 units, puts a major emphasis on prepared foods in its new format, 30,000-square-foot store, which opened in November in an upscale Los Angeles community.

In its first week, an expanded taco and burrito bowl bar was “doing the best,” said Ben Casey, director of catering and cafés, a former restaurant owner and veteran of the Walt Disney Co. The offerings, with store-braised meats, include interesting store-made salsas like mango and chipotle, which are available prepacked for takeout. Sandwich flavors have been kicked up a notch. While the store is keeping a few classics like turkey and mozzarella and tomato, new grab-and-go additions include turkey with fig jam and arugula and caprese with balsamic glaze. The new items are a test, with potential for expansion to other stores. So far, they “are definitely doing better” than the traditional versions, Casey said. Shoppers “are all looking for something different and new,” he said.

The salad bar has also been tweaked. It boasts more organic items, whole grains and raw ingredients, for $8.99 per pound. Bristol Farms’ in-house pizza-making program has been nixed for a grab-and-go flatbread that can be reheated.

To drive sales after lunch, the store has a happy hour from 4 to 6 p.m. with the hot bar and salad bar discounted $2 per pound.

The big idea, Casey noted, is to get shoppers in for lunch — and dinner — so they will be inspired to purchase some groceries too. “Just to get them in the store can drive the bottom line,” he said.

Taste, based in Virginia Beach, thrives on a healthy lunch business. But the eight-unit specialty retailer is making some tweaks to streamline offerings and attempt to add sales. “The backbone of our offerings has always been craveable house-made items prepared by our catering kitchen,” said company President Jon Pruden. At the latest Taste, opened in November in Ghent, Va., a new service model is in test. Customers order their meal at a counter but team members bring the food to the customer. “We don’t force them to return to the counter to retrieve their food. It’s a limited table-service model that customers seem to love thus far,” Pruden said.

Taste recently introduced a seasonal menu with many options and high hopes of success. But the program caused too much stress on the kitchen crew and quality started to suffer, so the company scaled back to two new sandwiches and two new salads with each season change.

Taste has also eliminated half-sandwich options and consolidated two salad sizes into one medium choice. “We’re doing much better on execution as a result without a significant drop in sales,” Pruden said. “The customers may not always be happy with limiting their options, at least initially, but they do seem to adjust over time.”