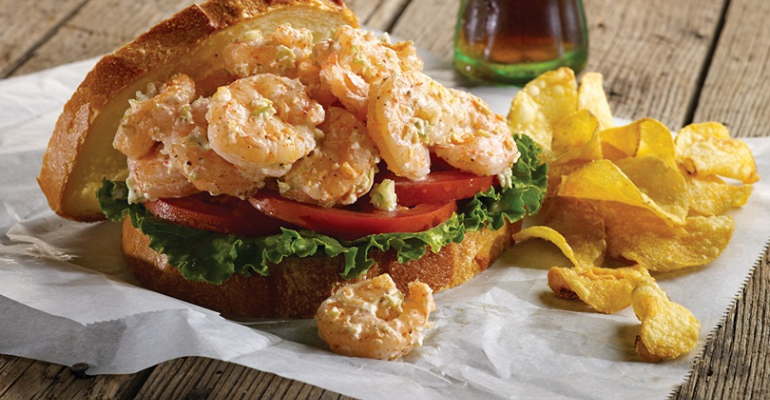 How supermarket delis can cater to the lunch crowd

The competition for consumers’ lunch dollars has never been tighter. And while fast food and fast casual chains focus on speed and innovation, supermarket delis have doubled down on their fresh capabilities.

In Sonoma County, California, where taco trucks and Latin-themed restaurants are a dime a dozen, Oliver’s Markets sells fresh-made tacos out of its deli department taquerias, located in each of the company’s four stores. Roxanne Abruzzo-Backman, the company’s foodservice coordinator, said that while her competitors offer faster service, Oliver’s competes with competitive pricing and high-quality ingredients, including organic beans, locally made tortillas, and locally raised chicken provided exclusively to the retailer.

In a community where consumers tend to be less price sensitive than average, focusing on quality and freshness makes a big difference. Oliver’s also offers gourmet soups, salads, and a line of signature sandwiches made with eye-catching ingredients like salsa-infused turkey, aged cheddar cheese and house-made bruschetta. Eddie’s of Roland Park customers can enjoy their deli food inside or out.

Focusing on freshness and quality has also paid off for Eddie’s of Roland Park in Baltimore. The company’s two stores see hundreds of customers during the lunch rush, many of whom come for the deli department’s signature sandwiches, paninis and wraps, like the jumbo shrimp salad sandwich and a chicken salad, bacon and lettuce concoction known as the “Roland Park Public School Wrap,” in honor of a local school.

Christine Stutz, Eddie’s marketing director, calls the stores a “fourth option” in an urban setting where fast-food, sit-down restaurants and packed lunches are the primary choices for the midday meal.

“[Customers] know they can get a very substantial sandwich, made with fresh ingredients, at a fair price,” she said.

Certainly, fresh and signature offerings are supermarkets’ specialties. But delis have also started dabbling in high-tech innovations on par with restaurant competitors like Panera, Chipotle and McDonald’s. Publix offers an order-ahead feature on its website that allows customers to build their deli lunches ahead of time, then pick them up in-store. Chains like H-E-B have introduced mobile apps that list daily specials and ingredients lists, while a few retailers, like New York e-grocer FreshDirect, have begun offering same-day delivery on prepared foods and groceries.

Speed of service is another concern for retail delis. To get customers in and out of its service area quickly, Oliver’s Markets recently installed Turbo Chef ovens in each of its stores.

“It has reduced order wait times dramatically,” said Abruzzo-Backman. “We had five-minute cooking times on many items that have been reduced to one minute.” Sarah Schmansky, director at Nielsen Fresh, encourages supermarkets to focus on convenience in many forms. Tech-savvy shortcuts like faster ovens and online ordering are helpful, but so are smart merchandising moves that don’t require major capital investment. Bundling items into combo meals can spark interest and higher rings, Schmansky said, citing Nielsen data showing that dollar sales of sandwich combos are up 12% over the past year, compared to 5% for sandwiches alone.

Retailers can also inspire creative pairings, Schmansky said, like grapes with cheese slices and pita chips with hummus dip. There’s also an opportunity to get shoppers to think ahead to the next meal. She cited Starbucks’ “Pack a Power Lunch” promotion, which encourages breakfast customers to build their own packed lunches using a selection of sandwiches, salads, fruit, chips, granola bars and water.

There’s a lot to be said for good old-fashioned pricing promotions, too. Stazi Dulman, executive chef at Nugget Markets, which operates twelve stores in northern California, said he’s always offering discounts on sandwiches and pizza offerings. His culinary team is constantly tinkering with ingredients and rolling out new menu items, and pricing promotions can help bring attention to those changes.

“We’re always offering something on special for our lunch customers,” said Dulman. Eddie’s of Roland Park puts a combination of four sandwiches, wraps and paninis on special each week, according to Stutz, with discounts of $1 to $1.50 on each selection. Several times a year, the stores offer a deep discount on its popular jumbo shrimp salad sandwich, slashing the price from $9.99 to $6.99.

“The special sandwiches always sell the best each week,” said Stutz. “Our customers tell us they often decide what to order based on the specials.”

One of the biggest challenges to supermarket lunch service is getting people to think of stores as meal destinations, explained Schmansky. With their large parking lots and deli departments often located at the back of the store, consumers often head for the drive-thru window.

In addition to speeding up service, retailers are also offering amenities for customers who want to slow down. Eddie’s offers indoor and outdoor seating for customers at one of its stores. Oliver’s, meanwhile, offers ample seating in each of its stores, along with a few extras.

“Live local music is offered many days of the week, which is also something we are known for,” said Abruzzo-Backman.