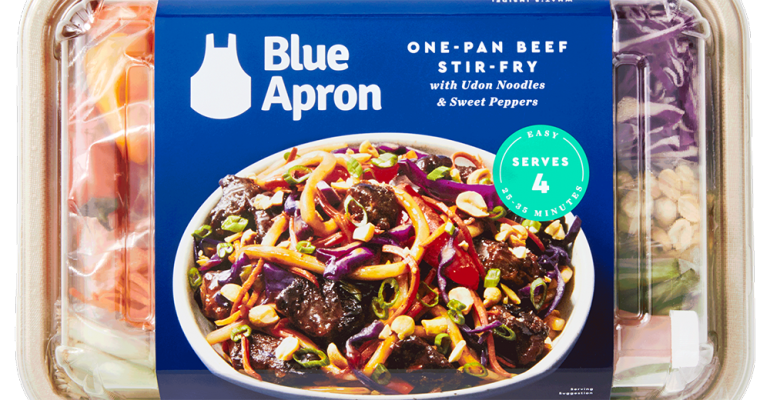 When online subscription meal kits were first introduced in the U.S. about six years ago, the idea was that it would be an online purchase and delivery model that would eliminate trips to the grocery store. Now, in a growing reversal from that original concept, online meal kit companies — a $1.5 billion industry, according to research firm Packaged Facts — are increasingly turning to brick-and-mortar retailers to sell their product. And the retailers are welcoming them.

"Meal kit delivery services are a specialized sector but widely disruptive force in the food industry," said David Sprinkle, research director for Packaged Facts. "And new approaches to fresh food groceries are what consumers are most interested in, and what will determine the winners and losers of the current food industry reset."

COMPETING FOR DINING DOLLARS:
• Introduction: Taking stock of the competition >>
• Convenience stores up the ante in fresh food >>
• Thinking like a restaurant to thrive >>

Over the past year, meal kit producers and retailers have been making news with partnerships and deals being inked at a breakneck pace, most recently with Kroger’s acquisition of Home Chef in a deal valued at up to $700 million. Plans call for Chicago-based Home Chef — which delivers more than 3 million meals a month through its online service — to become a Kroger subsidiary, continue to operate its offices and facilities and maintain its online business. In addition, Home Chef will oversee Kroger's meal solutions portfolio, with Home Chef meal kits being made available to Kroger shoppers in stores and online. (Earlier this year, Hannaford Supermarkets had begun offering Home Chef meal kits through the Hannaford To Go click-and-collect online grocery service.)

In announcing the deal, Kroger Chief Digital Officer Yael Cosset said, "This merger will introduce Kroger's 60 million shoppers to Home Chef, enhance our ship-to-home and subscription capabilities and contribute to Restock Kroger." The partnership not only ups Kroger’s meal game, but also the company’s digital presence.

“The Home Chef acquisition follows closely on the heels of the news that Kroger will partner exclusively with Ocado to use its online ordering, automated fulfillment and home delivery capabilities,” noted Karen Short, managing director, equity research at Barclays. “This announcement — immediately following the Ocado announcement — gives us increased confidence that Kroger is acting with a greater sense of urgency to evolve in this rapidly changing industry/environment — clearly a positive.” Observing that Kroger’s proprietary meal kit offering Prep+Pared has had underwhelming results, Short added that “a more robust meal kit offering would give Kroger a meaningful competitive advantage.” 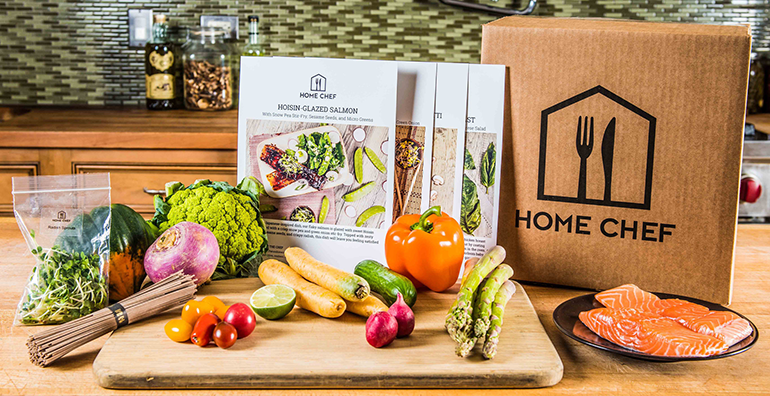 Kroger enriches its meal solutions with the Home Chef acquisition.

Kroger’s plan was just the latest — and biggest — example of grocery retailers who have suddenly embraced meal kits, which were regarded by supermarkets as an online competitive threat when they emerged in the U.S. market in 2012 with the introduction of Hello Fresh, Plated and Blue Apron —all of which have entered the brick-and-mortar universe this year.

Hello Fresh announced in June that it is launching its meal kits at nearly 600 Ahold Delhaize-owned supermarkets in the Northeast and mid-Atlantic, while fellow pioneer Blue Apron began piloting meal kits at select Costco Wholesale Corp. stores on the West Coast, marking the meal kit service’s first retail store distribution — and the start of more moves into brick and mortar, according to the company.

And following up on its acquisition of meal kit company Plated for $200 million last September, Albertsons announced in April that it was forging ahead with its plans to have the meal kits in “hundreds of stores” by the end of 2018 —eventually including Rite Aid stores in the near future, with the Albertsons-Rite Aid merger transaction expected to close early in the second half of this year.

And in May, more than a dozen retailers in 27 states — including Costco, Harris Teeter, Tops Markets, Hy-Vee, Weis Markets and Gelson’s Markets — began carrying Chef’d meal kits, rolled out in partnership with Smithfield Foods. The move marks the first foray by Los Angeles-based Chef’d into the retail arena. 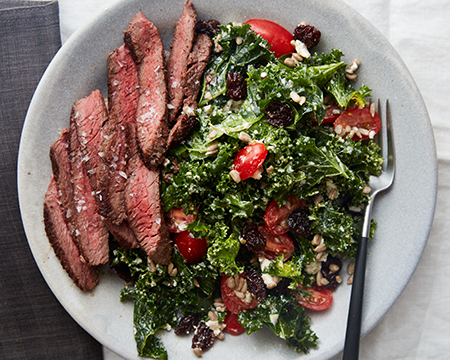 Albertsons staked a claim in the meal kit boom with its $200 million Plated acquisition. (Photo: Plated)

Perhaps the biggest seal of approval for meal kits at retail came from the nation’s largest brick-and-mortar retailer — Walmart announced earlier this year that it would be rolling out its own meal kits to more than 2,000 stores this year. The meals were developed and tested in the retailer’s Culinary and Innovation Center and are made and assembled fresh in-store daily.

What it all means

“Retailers are fully aware that consumers desire the convenience of meal kits,” noted Rick Stein, vice president, fresh foods at the Food Marketing Institute. “They will continue to develop their own meal kit initiatives or develop partnerships as fast as possible to meet the growing demand. Partnerships allow food retailers to mitigate shrink and optimize meal kit offerings sooner than later, but eventually I think they will prefer to develop their own offering as long as it is profitable.”

In Stein’s view, “meal kit brands need the retailer as much, if not more, than the retailers need the digital partners. The online meal kit brands are also challenged because consumers don’t always want to commit to a subscription. I believe that in the short term retailers will partner, but longer term I believe they will develop their own brand and establish a successful private label offering.”

While meal kits in-store is a win-win for both retailers and online meal kit services, Stein gave a slight advantage to the meal kit companies, saying, “I actually think the digital meal kit companies are getting the better deal right now. Brick and mortar are boosting their brands and giving them additional channels, supporting density and production.”

Indeed, as Packaged Facts’ Sprinkle pointed out, subscription meal kits have faced a number of growing pains that working with retailers may help alleviate — such as major logistical hurdles, high costs related to attracting and retaining a loyal consumer base and, of course, the imminent arrival of other — often larger — industry competitors and rivals. By teaming up, meal kits companies and supermarkets hope they have hit upon a winning formula.

Who are meal kit subscribers?

According to data from research firm Package Facts, almost all current meal kit subscribers use the company they first signed up with, and nearly that entire percentage recommends meal kits to friends. In addition:

Age — between 25 and 44 years old — is the strongest predictor of who uses fresh meal kit subscription services. Meal kit subscribers are disproportionately inclined to have ordered products or services online in the past three months, and to have purchased something digitally in the past seven days.