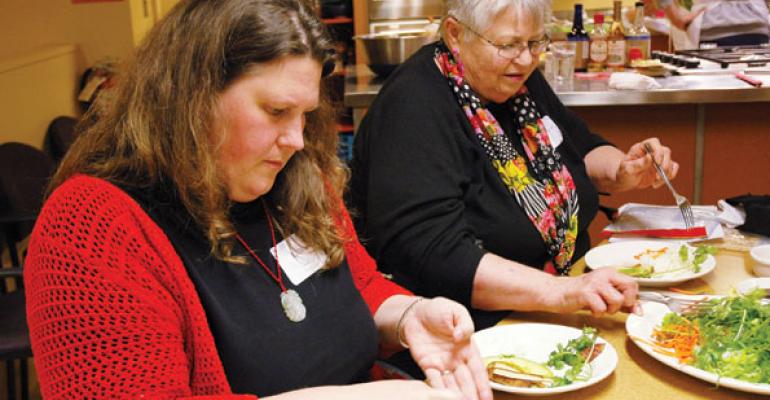 Retailers are spicing up cooking classes with Thai, Mediterranean, Indian and other ethnic foods

West Indian Fish Chowder … Jerk Beef Skirt Steak ... and Olive Tapenade and Tzatziki Sauce. These are just some of the exotic meals retailers like Publix, Central Market and others are teaching their customers to prepare.

International travel, celebrity chefs, food blogs and reality cooking shows are adding to the appeal of ethnic cuisine. Retailers are responding by hosting international cooking classes … and adding the necessary ingredients to their shelves.

Indeed, there’s no need to travel to the Mediterranean for an Arabian Nights-themed celebration complete with lamb kebabs and Persian rice salad.

That’s because next month, Jungle Jim’s International Market’s cooking school director Leigh Ochs (at left in photo below) will host a class featuring these and other Mediterranean delicacies.

Along with kebabs and rice, the class will feature Spicy Whipped Feta with Pita Chips, Garlic Yogurt Sauce and Moroccan Carrot Salad with Roasted Lemons. 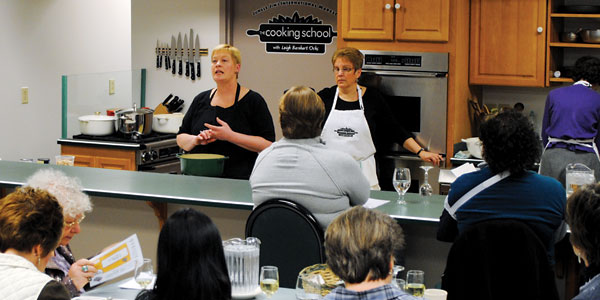 “Leigh lets the genie out the bottle and shares her recipes for an exciting Middle Eastern menu,” Jungle Jim’s writes in promotional materials. “Exotic and complex flavors combine to make a magical culinary hands-on experience.”

It wasn’t long ago that Chinese and Italian food made up the bulk of ethnic cooking classes. That’s no longer the case, as Thai, Moroccan, Caribbean and

Korean foods are among customer requests.

Peruvian and Peruvian-Japanese fusion foods are one of the newer trends, according to Terry Soto, president and chief executive officer of About Marketing Solutions, Burbank, Calif., a Hispanic consulting firm. 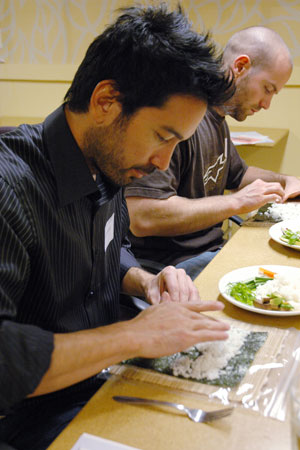 The popularity of fusion foods is a result of restaurant chefs leaving their kitchens and traveling to farmers’ markets and ethnic communities for inspiration, said Soto. They then take what they’ve learned and turn it into innovative recipes.

Consumers try these meals in restaurants, and seek to replicate them at home.

Food retailers that cater to such foodies will build a good reputation for being a diverse business.

“They can become the go-to place,” Soto noted.

True, retailers have international aisles. But such assortments are usually Americanized products, said Soto. Retailers instead should seek out more authentic offerings.

By carrying such a mix, retailers will meet the needs of the growing number of home cooks who are learning to experiment with new flavors and textures.

“It will help them ride on the fanaticism with cooking shows,” she said.

To be successful with ethnic cooking school classes, retailers should stock the necessary ingredients and proper cooking utensils in their stores.

“They need to have the assortment to back it up,” she said.

That’s certainly not a problem at Jungle Jim’s, a 300,000-square-foot store in Fairfield, Ohio, that carries more than 50,000 imported grocery items from more than 75 countries and regions around the world.

Due to the store’s massive size, shoppers are often at a loss where to find  specific ingredients. So chefs will pull ingredients and utensils off the shelves and offer them for sale in the cooking school.

As an alternative, chefs will also tell students exactly in which aisles they can locate the ingredients.

Since ethnic meals often call for infrequently used spices, chefs will often provide multiple recipes so that customers have more than one way to use the item.

Jungle Jim’s sometimes incorporates international wines into its ethnic cooking classes. For instance, next month, it will host a 2½-hour “Wine and Food From the French Countryside” class. On the menu:

• Pissaladiere, a pizza from Provence.

The meal will be complemented by a variety of wines chosen by Jungle Jim’s wine director Dave Schmerr. Wine selections will include Cotes Du Rhone White, Red and Rose and Bordeaux Rouge. 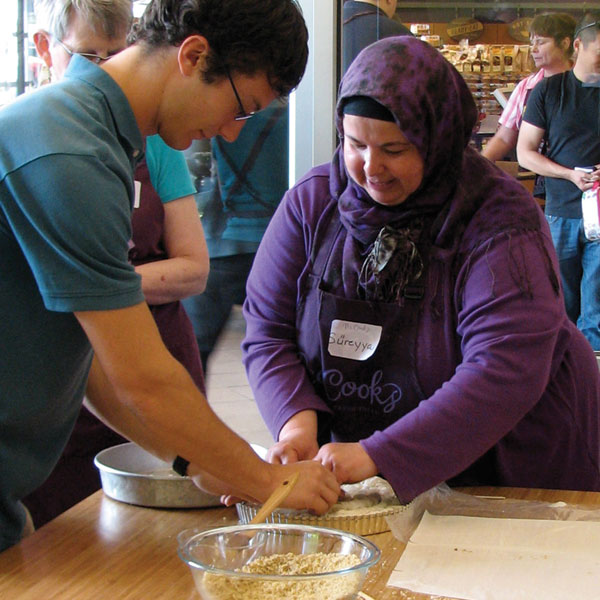 PCC uses the term global rather than ethnic because foods from other countries have become almost mainstream in the American food scene, said DeCicco.

“We like to showcase how approachable these cuisines can be,” said DeCicco.

PCC has had success with Asian flavors, and has held classes in Thai, Japanese, Chinese, Korean, Vietnamese, Indonesian and Indian cooking.

Other cuisines that are popular at PCC are Italian, Greek and Middle Eastern.

PCC hires natives of other countries for its cooking school because they can prepare authentic recipes, and can share stories about how food connects people and cultures. For instance, Sureyya Gokeri (in photo at right), who is from Turkey, taught a class on Mediterranean foods. She is from a part of Turkey that  is close to the Syrian border on the coast, where Turkish food is a blend of Mediterranean and Middle Eastern styles.

Meanwhile, PCC monitors trends and talks to customers to find out what new cuisines are popular.

“We are always looking for cuisines that we have not featured in the past, partly from trends that are showing, and from our customers who are familiar with the cuisines through travel or from eating at global restaurants,” said DeCicco.

Some of PCC’s most popular dishes have been vegetarian sushi (a long-running class that fills every time, often with a waiting list) as well as pad thai, a popular dish at Thai restaurants. Italian gnocchi, fresh pasta and biscotti are constant favorites, as are vegetarian Indian dishes and Chinese stir-frying techniques.

PCC has even given kids a taste of foreign foods with “Around the World in Five Days,” a summer cooking camp where they cook a menu from a different country each day of the week. In the fall, PCC will hold a French classics class for teenagers and a class on Chinese wraps for younger kids.

“Come aboard and take a cruise to the Islands,” Publix states in promotional materials. “See how it is to sit back, relax, and know that ‘everything is gonna be all right.’”

Publix schedules classes based on customer requests, according to spokeswoman Maria Brous.

“We listen to our customers to see what interests them whether it’s a new restaurant they’ve visited or something they have read in a magazine or online,” Brous said.

Some of the most popular ethnic classes are Asian, including Thai and Japanese sushi. Likewise, Italian cuisine is always a hit with beginners.

Some of its upcoming classes include clever names like “Wine & Dine on the European River Cruise,” “Out of Africa,” “Summer in Sorrento,”  “Am I Speaking Greek,” and “Getting Curried Away.” These were chosen based on suggestions made by chefs at each of the retailer’s cooking schools.

“The chefs are passionate about teaching customers new ways to incorporate ingredients that are both familiar and unfamiliar,” said Brous.

Traditional milk is here to stay in supermarkets
Mar 30, 2022