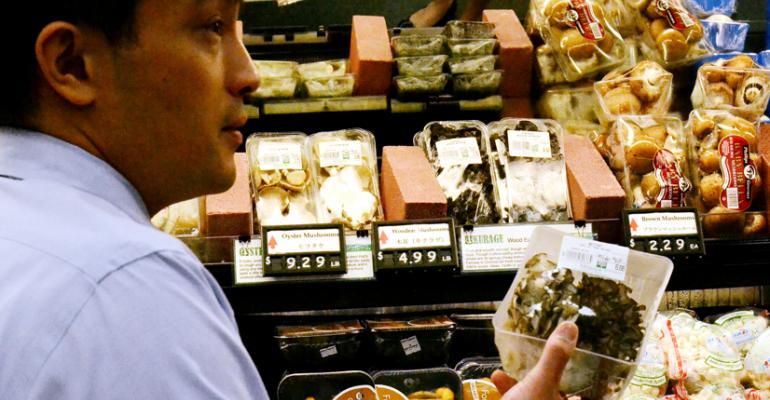 EDGEWATER, N.J. — By specializing in Japanese products — both traditional foods and modern novelties — Mitsuwa Marketplace here has become a destination for many types of customers looking for a taste of the Far East.

The 92,750-square-foot store offers everything from hard-to-find vegetables to unique candy flavors to cosmetics, alongside a spacious dining area with vendors selling ramen, sushi and other Japanese meals.

The store here is the largest of Mitsuwa’s nine locations. The retailer has seven stores in California and one in a Chicago suburb.

In the produce department, the approximately 200 items include vegetables such as bitter mizuna greens, giant daikon radishes and shiso, an herb whose leaves are often used in sushi restaurants.

Store manager Takayuki Ono said it is “very tough” to find local products, yet transportation costs and onerous importation regulations make it too difficult to bring in fresh produce from Japan.

Recently, Mitsuwa displayed a sign with information about supplier Suzuki Farm and its owner, a Japanese farmer in Delaware who brought over seeds from his home country to grow traditional greens and other vegetables.

Special sections of the produce department cater to Japanese tastes. The pickled vegetable section is filled with containers of items like awa rakkyo, a sweet pickled scallion. A wall of refrigerated cases holds the fermented foods section, which includes soybeans, miso and tofu.

“Even miso, we have so many kinds of miso,” said Ono, noting the store carries red miso, white miso and miso with bits of soy in it.

While organic may be a consideration for Mitsuwa produce shoppers, “fresh comes first,” said Ono.

At the same time, Ono said Japanese customers often prefer produce in packages because they think it looks nicer and they like knowing the price without having to weigh the items.

Ono said that his Japanese customers like to buy what they need daily, adding they don’t like to waste food at home or at restaurants by buying more than they can eat.

Mitsuwa also cuts its meats differently than one might find at a mainstream retailer.

Mitsuwa buys its meats locally but slices them thinner in-store using a meat slicer from Japan, he said.

One premium meat product is Miyazaki beef, which only comes from the Miyazaki region in southern Japan and costs $44.99 a pound. The beef is well marbled, and it’s similar to a true Kobe beef, Ono said.

The “texture is also very soft — it’s going to melt in your mouth,” said Ono.

The Miyazaki beef is not the only item with a head-turning price tag.

Customers might enjoy their fresh wasabi with fish from the 20-foot sashimi case. There, store-cut tuna, red snapper, octopus and other selections come fresh from the market daily.

Seafood department employees prepare sashimi and other items in full view of customers.

“Our main concern for the fish department is always fresh,” said Ono. 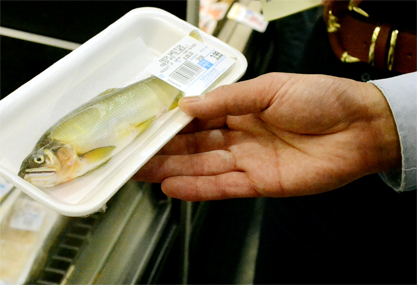 Fresh fish may be local or from Europe and South America, while some frozen packaged fish comes from Japan.

In a separate prepared food area, Mitsuwa sells boxes of sushi. Ono said the expiration date is always the same day the sushi is prepared, but at some American supermarkets he has seen expiration dates of two or three days later.

Mitsuwa imports many products from Japan for its center store departments, where Kashi GoLean cereal sits alongside more exotic fare.

Ono said Japanese customers like to find new and different items when they shop.

In Japan, candy companies come out with new products and flavors six times a year that are only available for a limited time, he explained. 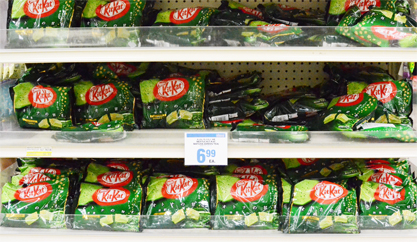 In early summer, Mitsuwa brought in 700 cases of green tea-flavored Kit Kat candy bars, a variety exclusively produced in Japan. Ono said the supply was almost gone in a month.

Other popular Japanese products include beauty items, diapers and scented toilet paper, which costs about $10-$12 for a four-pack.

Both within the store and in an adjacent strip of storefronts, Mitsuwa rents space to outside vendors, including Hamada-ya bakery, Shiseido cosmetics and Sanseido bookstore.

Though Mitsuwa is popular among other Asian groups — Ono said his customers are 40% Japanese, 40% non-Japanese Asians and 20% non-Asian — Ono said the focus would remain exclusively on Japanese products.

“That’s why people are coming to my store.”

Gallery: A Taste of Tokyo at Mitsuwa Marketplace
Sep 12, 2013