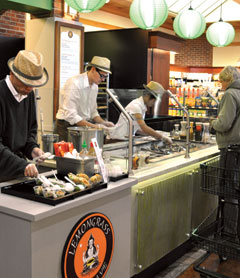 The Vietnamese menu's main attraction is pho (pronounced “fah”), a soup for which customers choose the ingredients from a variety of healthful options.

“This is the healthiest soup you could possibly imagine,” Bennis said. “The server starts with rice noodles. Then, the customer chooses from three already-hot broths, and can add ingredients from a list that includes about 30 items such as grilled pork, chicken, tofu, bean sprouts, shredded carrots, chili peppers and other chopped vegetables.”

Three huge pots of steaming hot broth — ginger coconut curry, Asian broth and vegetarian lemongrass — are visible to customers, just behind the service counter. The soups are served in two sizes of eco-friendly, disposable bowls with snap-on lids. They retail for $5.99 and $7.99. Three Vietnamese staffers serve customers from 10 in the morning to 7 at night.

“It's quick as well as healthy,” Bennis said. “We also offer a variety of Vietnamese sandwiches and salads wrapped for grab and go, and then, for dessert there's a sticky rice pudding and spicy fruit salad.” Customers comment on the freshness of the fare, Bennis said.

While the salads and sandwiches sell well, the high-margin pho is by far the customer favorite, Bennis said. She said she was surprised at the number of customers who were already familiar with the menu items, particularly pho. She figures they had read about Vietnamese cuisine, and had probably become acquainted with it at stand-alone restaurants in the Twin Cities area.

“Little Vietnamese restaurants have been popping up all over in St. Paul and Minneapolis in the last year or two, and more recently, they're filtering into the suburbs.”

Bennis said she was quick to adopt the idea when a woman who has researched the Vietnamese food trend suggested that an in-store take-out concept could be a success in a very small amount of space. The service counter, with self-service fronting, is adjacent to the deli, and takes up a space of only about 10 feet by 12 feet. Bennis explained that space was made by rearranging some displays in the deli.

“We had had our olive bar in that spot. We moved it to another part of the deli, and did some consolidating of other things.”

So far, the concept has been given a soft opening, with no marketing outside the store.

“Two weeks out we put a poster up in the deli, telling customers Lemongrass Bol de la Vie was coming. We attached [take-away] menus to the poster,” Bennis said. “We were surprised at the enthusiasm and the resulting numbers, since we hadn't really done anything other than that to promote it.”

Even with so little advance promotion, at lunch-time, customers are lining up to try the soups, which fill the deli area with an alluring aroma, Bennis said. She said she thinks the “healthy” aspect, as well as the differentness of the cuisine is a draw.