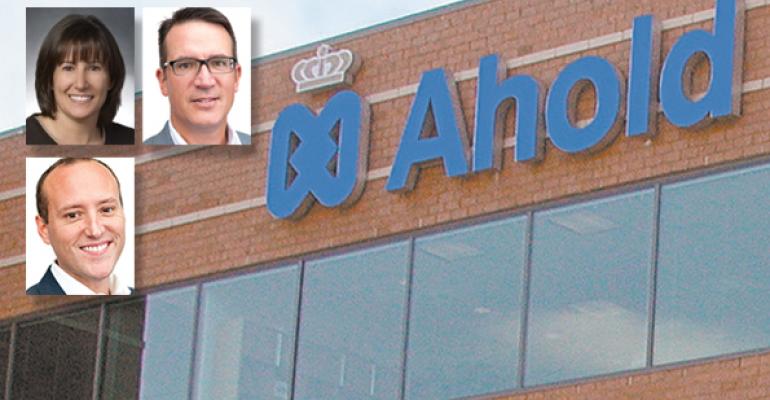 Ahold USA on Wednesday said it had made several new executive appointments — including new SVPs responsible for merchandising, healthy living and communications — as part of its previously announced plan to restructure its central support organization.

“With a clear and constant focus on serving the evolving needs of customers and stores, we are making significant, rapid progress in turning Ahold USA into an even faster, stronger and more responsive organization,” James McCann, COO of Ahold USA, said in a statement. “While there are still important decisions to make over the next few weeks, we now have a new organizational framework in place — ahead of schedule — that reduces management layers, increases the number of direct reports for many managers and brings important decisions closer to the stores that serve local shoppers each day.”

As reported previously in SN, the restructuring initiative is expected to result in around 120 jobs eliminated at Ahold — around 6% of its central services staff.

Naming Nick Bertram (currently SVP of store strategy and execution) to the role of SVP of merchandising strategy and support. This is a new function that will help simplify the organization and improve the company’s ability to serve customers by providing core merchandising teams with comprehensive support on product assortment, pricing and promotions, Ahold said. Dean Wilkinson (currently VP of sales and marketing for Giant-Landover) will replace Bertram as SVP of store strategy and execution.

Also, as previously announced, Mark McGowan is moving into his roles as EVP of operations for Ahold USA and president of the Stop & Shop New England Division. McGowan most recently served as EVP of merchandising for Ahold USA. SVPs of merchandising will report to McCann for an interim period. With the change Don Sussman, who stepped in to lead the New England Division on an interim basis, will now return full time to his role as president of the Stop & Shop New York Metro Division.

Robert Belcher has been appointed the new regional VP for Region 10. He most recently served as the director of sales and merchandising (center store). Belcher, who has worked in retail management for more than 30 years, started with Giant in 2011 and formerly held a senior operations position at Walmart.

Stop & Shop New England said Russ Greenlaw, SVP of operations, will be leaving the to take on a new special projects role for Ahold USA, effective June 1. Stacy Wiggins, who currently serves as regional VP of operations for Giant-Carlisle, will succeed Greenlaw. In addition to her work with Giant, Wiggins has also worked for Giant Landover, Stop & Shop New York Metro and Walmart.

In addition, Vinod Israni is being promoted to the role of regional VP for Region 1. Israni has been with Stop & Shop New England since 2000, serving as district director, service manager and store manager.

Giant-Carlisle said John Ponnett is returning to the company as SVP of operations. Ponnett served most recently as VP of asset protection at Ahold USA. He succeeds Larry Stover, who in March announced his retirement after 47 years of service. Ponnett will transition into his new role and work side-by-side with Stover until Stover’s retirement in July.

Ponnett has worked with Ahold USA businesses for more than 27 years, including as regional VP of operations, director of fresh sales and marketing and district director for Giant.