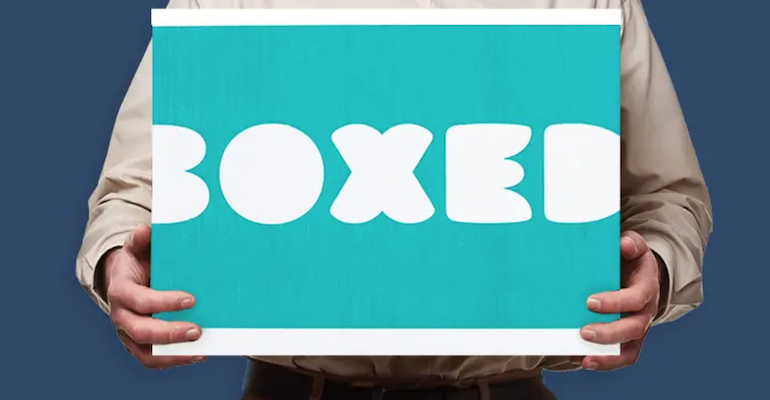 Boxed
The appointments come just months after Boxed made its public market debut and announced plans to license its e-commerce platform.
News>Executive Changes

Online bulk-products retailer has made a trio of appointments to its C-suite, including a chief revenue officer, chief people officer and general counsel.

New York-based Boxed said Friday that Anna Meyer has joined the company as chief revenue officer. At Boxed, she will be charged with the acquisition of new clients for the Spresso software business.

Boxed described Meyer as a “results-driven revenue executive” who brings two decades of experience in building high-performing teams and driving profitable revenue streams in the retail tech sector. Most recently, she led the sales organization at Sezzle, a fast-growing financial technology firm. Boxed noted that, in nearly three years at Sezzle, she assembled a team that grew the retail customer base by over 670%. Before joining Sezzle, Meyer spent over 14 years at SPS Commerce, most recently as director of retail sales.

Meanwhile, Veracelle Vega comes to Boxed as chief people officer from direct-to-consumer mattress company Resident, where she held the same title. Boxed said she brings 20 years of experience delivering and building high-performing companies. At Boxed, her responsibilities include leading and developing all people strategies, including organizational efficacy, compensation and total rewards, talent management, learning and development, employee engagement, talent acquisition and the development of a work culture with a focus on DEIB (diversity, equity, inclusion and belonging, the company said.

Joining Boxed as corporate general counsel and secretary is Jung Choi, who brings 15 years of legal experience at large public companies and in private practice, most recently as vice president, assistant general counsel and assistant secretary at Stanley Black & Decker. Prior to that, she held roles at Bristol-Myers Squibb and Davis Polk & Wardwell, where she started her legal career. Boxed said Choi will lead all legal and compliance matters and serve as a strategic adviser to management and the board of directors.

Meyer, Vega and Choi come to Boxed just months after the e-tailer made its public market debut and announced plans to license its end-to-end e-commerce platform as a software-as-a-service (SaaS) offering, joining the company’s retail operation as a business unit.

“We are entering a monumental period of growth at Boxed, and having Anna, Jung and Veracelle join our leadership team with the breadth of knowledge and experience they bring, is critical to our long term goals,” Boxed CEO and co-founder Chieh Huang said in a statement. “Of these key hires, all identify as female and two identify as minorities, illustrating Boxed’s continued commitment to diversity and inclusion.”

Boxed is known for providing warehouse club-style shopping — including groceries, pantry items, household staples, HBA, office supplies, and organic and green products — through its website and mobile app. Consumers and businesses can buy club-sized packages with free two-day delivery in the continental U.S. on purchases of over $49, without the membership fees of traditional warehouse clubs.