New York-based Boxed said Tuesday that Wilson will lead its core retail business, which provides warehouse club-style shopping — including groceries, pantry items, household staples, health and beauty aids, office supplies, and a variety of organic and green products — in a digital setting and without membership fees.

Boxed offers consumers and businesses club-sized packages with free two-day delivery in the continental U.S. on purchases of over $49, without the membership fees of traditional warehouse clubs. 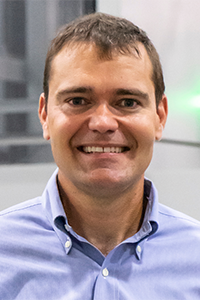 “Boxed is an innovative company that identified and capitalized on a real opportunity in the grocery space,” Wilson (left) said in a statement. “I’m super excited to join Boxed, where I see massive potential for its end-to-end platform to deliver an industry-best shopping experience for customers, as well as unrivaled value for vendors.”

Previously, Wilson spent nearly eight years at Amazon, most recently as vice president and general manager of Amazon Business, a global division he created and grew to more than $10 billion in annual sales in less than four years, according to Boxed. Before that, he served as vice president of global sourcing and procurement at Cisco Systems, joining the networking giant after 12 years at Honeywell International, where he held various positions in engineering, purchasing and manufacturing operations.

“In a rapidly evolving industry, we’ve been able to grow from a technology startup selling online bulk groceries to a full-service retail partner also offering software and actionable data insights,” stated Chieh Huang, co-founder and CEO of Boxed. “Prentis will help us in scaling this operation, bringing years of insight from a strong player in the e-commerce landscape.”

Boxed noted that Wilson is the latest in a series of senior leadership hires, including Chief Financial Officer Rhonda Ramparas, Vice President of Growth Seiya Vogt and Vice President of Product Andrea Chesleigh.

Over the past year, the startup company  founded in 2013 — has continued to scale operations and grow its Prince & Spring everyday essentials private label, which generated record sales in the 2019 first quarter. Last August, Boxed raised another $111 million in Series D funding, which the company has used to spur fulfillment center automation and generate awareness in key local markets. When it announced the funding round, the e-tailer also said it was exploring expansion of its operations around the country, including in potential new sites in the Chicago area for a Midwest-based facility.

And this past May, hard-discount grocer Lidl US said it has partnered Boxed to test a home delivery service through stores in New York and Georgia using the online retailer’s technology.