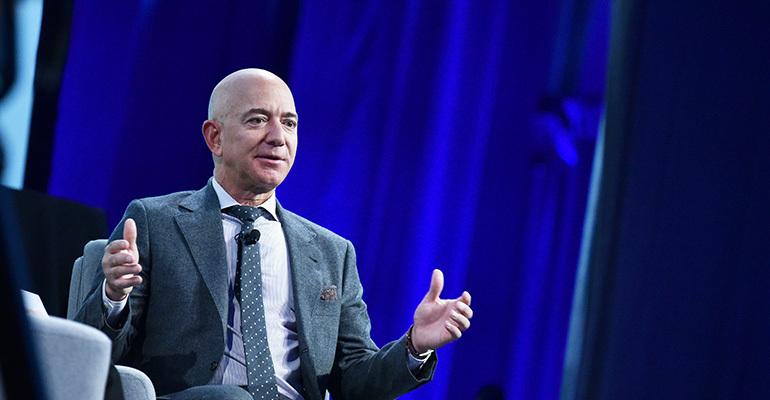 MANDEL NGAN / Contributor / AFP
Founder and CEO of Amazon, Jeff Bezos, will step down as chief executive in the third quarter of this year.
News>Executive Changes

Jeff Bezos to step down as Amazon CEO

Jeff Bezos, the founder and longtime CEO of Amazon, will be stepping down from that chief executive role during the third quarter of this year and will be replaced by Andrew Jassy, current CEO of Amazon Web Services. Bezos is transitioning to executive chair of Amazon’s board.

Bezos founded Amazon as an online bookseller in 1994 and has led its growth to become the largest e-commerce retailer in the world, currently worth more than $1.6 trillion. Along the way, Bezos became the high-profile face of the company and, for many people, e-commerce.

In a letter to his “fellow Amazonians,” Bezos wrote, “Amazon is what it is because of invention. We do crazy things together and then make them normal. We pioneered customer reviews, 1-Click, personalized recommendations, Prime’s insanely-fast shipping, Just Walk Out shopping, the Climate Pledge, Kindle, Alexa, marketplace, infrastructure cloud computing, Career Choice, and much more.

“If you do it right, a few years after a surprising invention, the new thing has become normal. People yawn. That yawn is the greatest compliment an inventor can receive. When you look at our financial results, what you’re actually seeing are the long-run cumulative results of invention. Right now I see Amazon at its most inventive ever, making it an optimal time for this transition.”

He also announced Jassy as his replacement, saying, “Andy is well known inside the company and has been at Amazon almost as long as I have. He will be an outstanding leader, and he has my full confidence.”

Among Amazon’s holdings are Whole Foods Markets, the 500-store grocery chain it purchased in 2016, which was the company’s first foray into brick-and-mortar food retail. The company now also operates its high-tech Amazon Go convenience stores and most recently introduced Amazon Fresh supermarkets in some markets.

This is a developing story. Stay posted for updates.