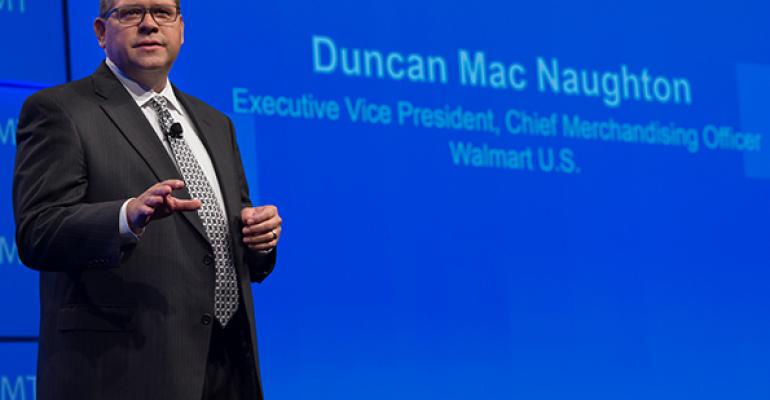 Wal-Mart Stores said Tuesday that its chief merchant, Duncan Mac Naughton, was leaving the company to pursue other opportunities.

U.S. CEO Greg Foran said the company would not immediately name a new chief merchant, but instead retool its merchandising team in a shakeup that will also see current EVP of food Jack Sinclair replaced by Steve Bratspies, the company’s current EVP of general merchandise. Sinclair will help transition the food business in coming weeks before taking another role at Walmart, to be announced at a later date, Foran said in a memo.

Also affected in the shakeup are Andy Barron, who will retain his role as EVP of softlines and also assume responsibilities for general merchandise. Michelle Gloeckler will remain EVP of consumables and U.S. manufacturing, with Labeed Diab, SVP of health and wellness, now reporting to Gloeckler. John Aden, EVP of sales innovation, and Scott Huff, EVP merchandising operations, will remain in their roles. All but Diab will report to Foran.

Mac Naughton, a former chief merchant at Supervalu, was named CMO at Walmart Canada in 2009 and ascended to his current role at Walmart U.S. in 2011. He previously held leadership positions at Kraft Foods, H.E. Butt and Albertsons. MacNaughton is the latest top executive to depart from Walmart in 2014. Earlier this year, Foran replaced Bill Simon as the retailer’s U.S. CEO, months after Doug McMillon replaced Mike Duke as CEO.

“Through Duncan’s leadership, we have focused on developing our merchants while also driving stronger collaboration between marketing and merchandising. This has made us more relevant to and focused on our customers,” Foran said in the memo. “I also think it’s important to recognize Duncan for his leadership in re-engaging with our suppliers to develop joint business plans. This work is resulting in better and more localized assortment in our stores.

“In partnership with the operations team, Duncan has driven customer-centric innovations that we will build from to move forward. He’s always been, and I’m sure always will be, an advocate for our customers and our stores,” Foran added. “We’ll miss his creativity and energy. Please join me in thanking him and wishing him well.”

Bratspies was SVP of dry grocery for Walmart until February, when he was named to the general merchandise role. He has served Walmart in a variety of roles since 2003 including SVP of marketing and chief marketing officer. He formerly worked with Frito-Lay. Sinclair has been with Walmart since 2007 and in the retail food business since 1982.