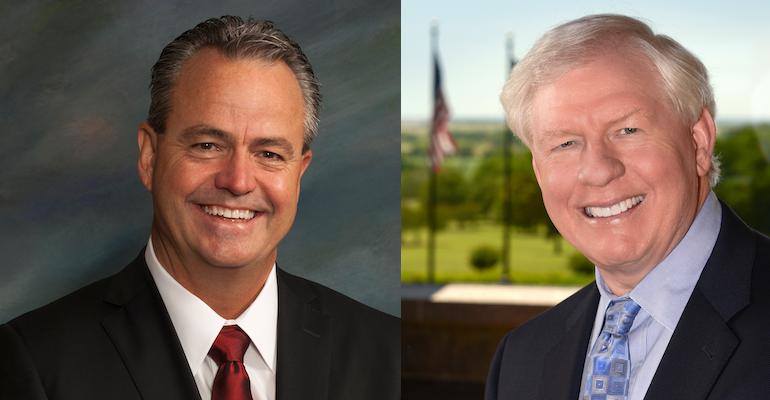 McLane Co.
Tony Frankenberger (left) will take the helm as McLane’s president and CEO on Aug. 28, when Grady Rosier is slated to retire after 36 years with the Temple, Texas-based grocery and foodservice distributor.
News>Executive Changes

Plans call for Frankenberger to take the helm as McLane’s president and CEO on Aug. 28, when Rosier is slated to retire after 36 years with the Temple, Texas-based grocery and foodservice distributor. He has been president and CEO of McLane, a subsidiary of Berkshire Hathaway, for the past 25 years.

In becoming CEO, McLane said, Frankenberger will retain his responsibilities as president of McLane Grocery, a $33 billion business unit providing supply chain solutions to more than 70,000 retailer locations. A 35-year McLane veteran, Frankenberger began his career at the company as a washer, fueler and mechanic in the transportation department. Since working his way up in the ranks, Frankenberger has attained more than 15 years of senior management experience, including various leadership positions in merchandising, procurement, and operations.

“I have personally known Tony for more than 30 years and feel this is a tremendous opportunity for him to continue building the sustainability and growth of McLane into the future,” Rosier said in a statement yesterday. “He is an exceptional leader, with a track record of operational excellence, building high performance teams, and extraordinary customer service.”

McLane noted that, during Rosier’s tenure as CEO, the company has boosted its market share and annual revenue, which climbed from less than $6 billion to more than $50 billion. In that time, the grocery division expanded distribution from convenience stores to other retailers, including drugstores, mass merchants, warehouse clubs, value stores, supermarkets and alcoholic beverage stores.

In addition, Rosier played a pivotal role in the 2003 sale of then-Walmart subsidiary McLane to Berkshire Hathaway, and he spearheaded the creation of a new foodservice distribution division servicing QSR, fast casual and casual restaurants, which the company said is now one the largest in the industry.

“McLane is not just a company to me,” Rosier commented. “It has been my passion, and the people at McLane are my family.”

Before joining McLane, Rosier spent more than a decade in various executive roles in the convenience store channel. He was inducted into the Texas Business Hall of Fame in 2015 and currently serves on the board of directors of NVR Inc. and NuStar Energy.

“I am thrilled for Grady, and I wish him nothing but health and happiness in this new chapter of his life,” Frankenberger stated. “I am honored to follow in his footsteps at an incredible company with outstanding teammates.”