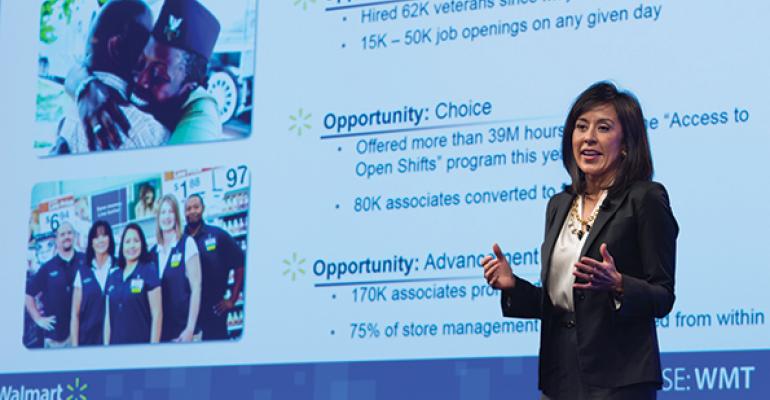 &quot;A lot of it comes down to execution in fresh food.&rdquo; &mdash;CRAIG JOHNSON, Customer Growth Partners

Rapid churn at the top executive ranks at Wal-Mart Stores continued as a new chief operating officer and a shaken-up merchandising team take on new roles.

The changes come as the retailer continues to lag sales growth of major U.S. competitors including Kroger and Costco — a lag resulting at least in part from a culture focused too sharply on efficiency and scale at the expense of in-store execution, industry analysts told SN.

Walmart subsequently turned over its U.S. COO role to Judith McKenna, replacing Gisel Ruiz in a move that would appear to shift the retailer’s operating focus to omnichannel retailing over optimizing efficiencies in physical stores. Ruiz is to take a role as EVP in the retailer’s International division.

Foran has made no secret of his dissatisfaction with presentation and assortment of fresh food at Walmart stores, but the merchandising team was likely under the gun even before Foran’s August arrival, according to Craig Johnson, president of Customer Growth Partners, New Caanan, Conn.

“Walmart operates in the same economy as everybody else including Kroger, Safeway and Costco, but while Kroger is doing one number in like-for-likes, Walmart has been well short of that,” Johnson told SN. “And a lot of it comes down to execution in fresh food.”

According to Johnson, Walmart has been plagued by “front-line executional issues” like produce rotation for some time but unable to adequately address such issues in stores. “If you’re the merchant you can scream until you’re blue in the face, but if the people on the store level are not rotating, tossing, cleaning, neatening up — all the blocking and tackling you need to do in fresh — then there’s not much you can do.”

Mac Naughton, a former chief merchant at Supervalu, was named CMO at Walmart Canada in 2009 and ascended to his current role at Walmart U.S. in 2011. He previously held leadership positions at Kraft Foods, H-E-B and Albertsons. Company officials lauded Mac Naughton’s work to better align marketing and merchandising at Walmart, as well as collaborating with suppliers to offer more relevant assortments.

According to Burt P. Flickinger III, managing director of Strategic Resource Group, that work was undermined by a lack of investment in stores.

“Duncan Mac Naughton knew what to do,” Flickinger told SN, “but he was not able to add back cuts in either inventory or labor.”

Foran said the company would not immediately name a new chief merchant, but instead retool the team so that merchants report directly to him. “I would like to use this opportunity to get closer to the merchandising organization,” he said in a memo.

Steve Bratspies, the company’s current EVP of general merchandise, replaces Sinclair, who will take another role at Walmart, Foran said.

Also affected in the merchandising shakeup are Andy Barron, who will retain his role as EVP of softlines and also assume responsibilities for general merchandise. Michelle Gloeckler will remain EVP of consumables and U.S. manufacturing, with Labeed Diab, SVP of health and wellness, now reporting to Gloeckler. John Aden, EVP of sales innovation, and Scott Huff, EVP merchandising operations, will remain in their roles.

“In partnership with the operations team, Duncan has driven customer-centric innovations that we will build from to move forward,” Foran said in the memo. “He’s always been, and I’m sure always will be, an advocate for our customers and our stores.”

Bratspies was SVP of dry grocery for Walmart until February, when he was named to the general merchandise role. He has served Walmart in a variety of roles since 2003 including SVP of marketing and chief marketing officer. He formerly worked with Frito-Lay.

Sinclair has been with Walmart since 2007 and in the retail food business since 1982.

In moving from Ruiz to McKenna as COO, Walmart gains an executive with international experience and an eye on multichannel retailing aligned with the overarching strategy of CEO Doug McMillon.

McKenna joined Walmart nearly 20 years ago in its Asda division in her native U.K., eventually serving as Asda’s CFO and COO. McKenna also served Walmart International as EVP of strategy and international development.

At Walmart U.S., McKenna’s initiatives included overseeing new formats including the development of its newly opened Grocery Pickup facility, which was based on Asda’s success with “click-and-collect” Internet shopping in the U.K.

“At her core and by experience, Judith is a retailer who has made major contributions to our business throughout her career,” Foran said in a statement. “It’s exciting to bring her skills in managing store operations, small format growth, logistics and e-commerce to an expanded role in our U.S. operations. Her knowledge of global best practices and her success in leading our associates around the world will help drive our Walmart U.S. business forward.”

“Gisel is an inspirational leader who has consistently contributed to Walmart’s growth and success throughout her 22 years with the company. Her proven track record and unwavering commitment to our associates make her the perfect choice for this new role,” said Cheesewright. “The expertise and leadership that Gisel brings are needed as we take our International Division to the next level. I’m looking forward to the impact she’ll have on our associates and business around the world.”