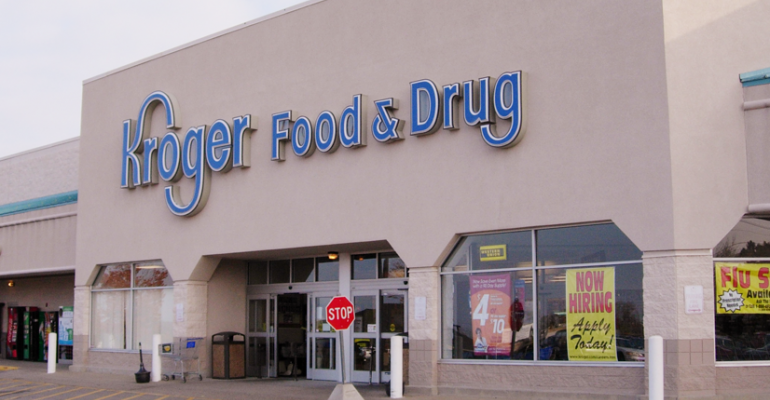 The retailer said net earnings in the quarter, which ended May 25, totaled $481 million, or 92 cents per share, on sales of $30 billion. Analysts had expected earnings of 89 cents per share.

Kroger subsequently raised its annual earnings guidance to a range of $2.73 to $2.80 per share, from previous guidance of $2.71 to $2.79, but the market may have found that bump too modest, particularly at the top: Kroger stock, which reached a 52-week high the day before earnings were announced Thursday, tumbled by more than 6%.

“We continue to strive to be in the top part of that [earnings guidance] range,” David Dillon, Kroger’s chief executive officer, replied to analysts who asked about the conservative forecast during a conference call. “But I would say the biggest thing is it’s just early in the year, and it felt too early to change guidance on that given all the uncertainty going on in the marketplace.”

Kroger maintained its forecast for annual non-fuel identical sales growth of 2.5% to 3.5%. “Customer sentiment is gradually improving but remains fragile,” he said. “We continue to see high variability in sales comparisons between days and weeks.”

Rodney McMullen, Kroger’s chief operating officer, said operating results were strong during the quarter, citing non-fuel identical store gains of 3.3%, increased market shares, and a continued strong rollout of the new Simple Truth natural and organic private brands. That label will see 75 new introductions by the end of the year, growing the line to 450 SKUs, he said.

McMullen said inflation during the quarter was about 1.7%. Sales grew as a result of increases in store traffic and a slight improvement in average basket size. Loyal shoppers grew at a faster rate than total shoppers during the period.

Updating the company’s strategic priorities, McMullen said Kroger was narrowing its focus on new markets for expansion but declined to identify them.

In light of recent expansion of Internet grocery by AmazonFresh, two analysts asked the company about progress it has made in Denver, where it has been testing an Internet grocery model at its King Soopers stores for several years.

Dillon said the business there “continues to grow at a modest rate,” but talked about Internet grocery as only a part of an overall digital strategy also making use of Kroger’s loyalty and customer data.

“We think it’s important to look at more than just what you sell on the web, and how do you connect with the customer on an overall digital basis,” he said. “We’re having huge growth with people downloading our apps, using the apps on almost a daily type basis. And we’ve partnered with Dunnhumby in terms of making that relevant for each customer.”