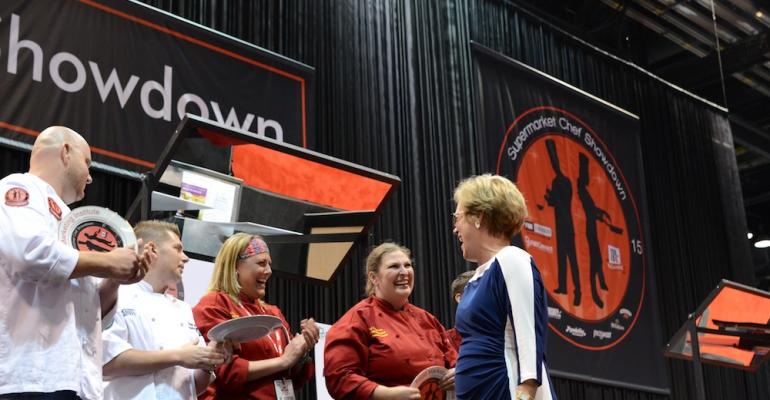 Hy-Vee Chef Elizabeth Davis is going to Italy. The chef took the grand prize at the Supermarket Chef Showdown at FMI Connect in Chicago. Davis won an all-expenses paid trip to Calabria to take a course at the Italian Culinary Institute.

Davis let out a yell of surprise after FMI CEO Leslie Sarasin announced she had won the prize and hugged Sarasin.

Rick Stein, FMI’s VP of fresh foods, shared the judges’ observations of Davis’ dish: “So fresh and delicious, a fun interaction for parties, very inviting and a wonderful taste.”

After giving the category award to Davis, Stein added, “And this was quite the platter that Elizabeth had yesterday, with long chopsticks, sashimi, julienned vegetables and then asked the judges to sort of mix it up and have fun with it.”

Davis has a bachelor's degree in culinary arts from the Johnson & Wales University in Providence, R.I.

Fifteen finalists came to the show to compete. The category winners each won a $1,000.

Gallery: Supermarket chef finalists to face off in Chicago
Jun 04, 2015