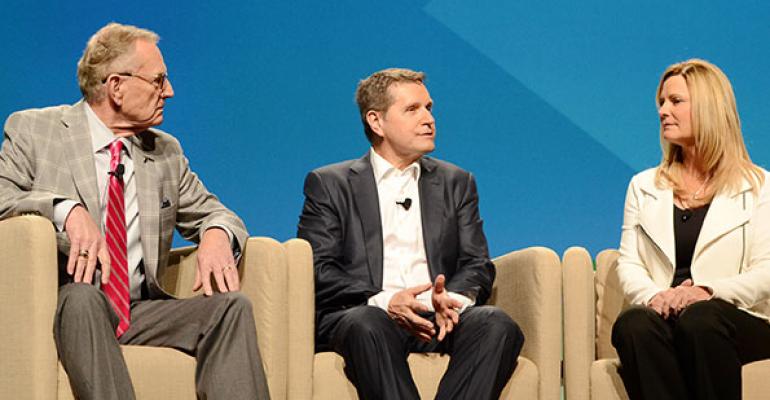 There are many paths to senior leadership positions in the food retail industry, according to panelists at the Future Leaders @Connect general session on Monday.

Laura Fulton, SVP of Northern Region operations at Hy-Vee, first joined the Midwestern retailer almost 34 years ago as a high school student as part of a work- study program. She both called and returned to the store after she applied to the job to follow up on her application status.

“The store manager at the time said, ‘Would somebody please hire this girl because I need her off my back,’” said Fulton with a laugh.

Fulton worked her way up from cashier to accounting coordinator and later held the positions of store director and assistant VP of operations before she ran a distribution center and moved to her current role in operations seven years ago.

“I actually had no aspirations of doing anything other than working in southeast Iowa at a small store in Fairfield, Iowa,” she said.

Bob Mariano, chairman and CEO, Roundy's Supermarket, had career ambitions to go to medical school after college or work for the pharmaceutical industry, but those plans didn’t work out. Instead, Mariano joined the Oscar Mayer Co. as a foodservice salesman, while also working weekends at Dominick’s as a part-time deli clerk — like he had done during college. Mariano eventually became CEO and president of Dominick’s, but along the way held many positions — including assistant commissary manager, VP of manufacturing, and roles in merchandising, marketing and retail operations.

“The roots are really deep, and it’s been a lot of fun to be sure,” said Mariano.

Dave Skogen, chairman, Festival Foods, was born into the supermarket industry. His father bought a grocery store when Skogen was 5.

“I’m 73 years old and I’ve had one wife, one job and lived in one community,” Skogen said.

When the panel was asked about important skills they’ve learned in their own careers, Skogen said he teaches “teammates young and old not to chase money.”

Fulton said team-building skills have been especially important to her in her career.

Mariano stressed the importance of critical and analytical thinking.

“I was taught early on to listen to your intuition, but verify it with the numbers.”

Mariano also pointed to collaborating, motivating, listening and rallying people around a shared vision as essential skills to learn.

For up-and-coming supermarket executives at FMI Connect, the panelists gave advice on how to make the most of the conference:

Skogen: Engage with the vendors, ask questions and introduce yourself to people and share ideas.

Fulton: “Go back [home] and do something with it. Continue those relationships that you build here. Go back if you see something that you really like, go back and engage and do it,” she said as a follow-up to Mariano and Skogen’s advice.