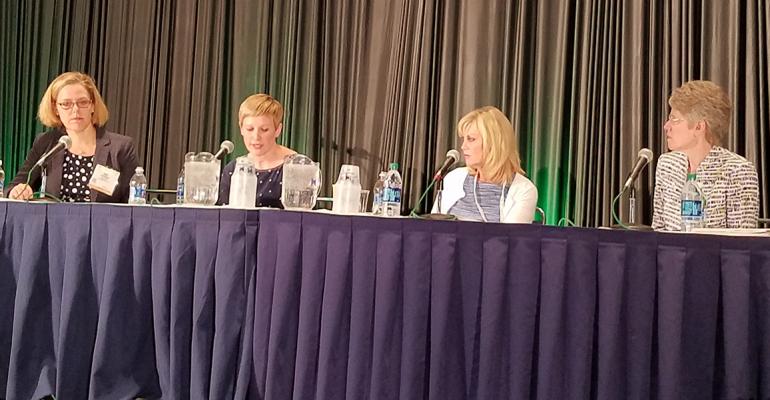 Nearly two-thirds of U.S. consumers today see food as medicine, underscoring the continued strength of the health and wellness trend, according to a new report detailed Thursday morning at FMI Connect in Chicago.

The “Shopping for Health” report was conducted by Organic Life magazine in partnership with FMI, and revealed that today’s consumers understand the role that food choices play in their health, even if they struggle at times to eat as healthfully as they intend to, Melanie Hansche, editor in chief of Organic Life, said. The study also provided a look into trends within the movement, such as the growing influence of snacking and functional foods, and detailed changing consumer attitudes on dieting and food provenance.

“It’s not just a trend,” Hansche said of health and wellness. “It’s a shift. It’s a real movement. We’ve been covering healthy food for a very long time, but the interesting thing is how many other people have to claim this space. The fact that Martha Stewart brought out a healthy cookbook last year called "Clean Slate." The fact that publishers like Food & Wine and Bon Appetit are doing health issues. There’s been a real ground swell in this movement.”

These trends are playing out at retail as consumers increasingly switch to healthier versions of conventional foods and seek out what Hansche called “food with benefits.”

Supermarkets and manufacturers each have a role in responding to the trend as well. Panelist Maureen Murphy of Price Chopper/Market 32 highlighted efforts to provide consumers with guidance from a corporate dietitian, rolling out nutrition shelf tag programs and highlighting healthy recipes. Barb Ledermann, senior nutrition manager of Unilever, said the company has been reformulating food products for more than a decade to meet health trends, sometimes quietly so, as a trend toward reduced sodium can correlate with customer perceptions of flavors changing.

The survey revealed that 76% of shoppers said they would like food to help with their heart health; 73% want food that gives them more energy; and 70% seek foods to aid with digestive health. Around 39% of shoppers buy gluten-free foods, with many doing so because they believe it’s healthier.

“We’ve seen the needle move a lot in the area of functional foods,” Hansche said.”There’s a perceived health benefit that is a really strong cue for consumers. A lot of people really want to avoid seeing a doctor, and if they can do that by what they’re eating, they will do that.”

Weight concern continues to be a strong driver of healthy food purchases, but consumer actions trail their intentions, Hansche noted.

More than half of consumers feel that they’re overweight, but just 28% said they are actively trying to lose weight. They are tripped up most often by hunger impulses, a lack of motivation and an unwillingness to give up their favorite foods.

Moreover, Hansche said, the wellness trend is changing the narrative around diets.

“Americans are a lot more skeptical about dieting and what we traditionally considered diet food,” she said. “The concept of healthy food today isn’t necessarily the concept of healthy food of the ’80s, ’90s and aughts. A lot of the diet foods from that era were really heavily processed, with emulsifiers and things that were put in to mimic deliciousness without the calories. What we’ve seen is the market shift toward this idea of real food instead of processed food as way to maintain health.”

On average, shoppers eat home-cooked meals 4.5 nights a week, and 57% of shoppers with children eat with their kids every night. These parents want more help from food stores to provide healthy foods for their children, Hansche said, primary by providing more kid-friendly recipes in-store (33%), displaying items to make meals together (33%) and offering more ready-to-eat meals that kids like (30%).

These trends dovetail with a demand for convenience shown in the growth of snacking — a trend that has grown by 67% in the last five years, according to Hansche.

“What they are looking for are the kinds of snacks that have high fiber, high protein, slow release of good carbs and low sugar. What they’re really looking for is where convenience and health meet,” she said.