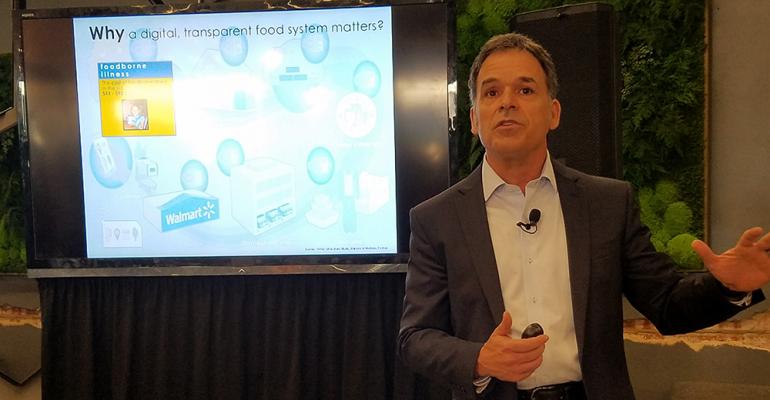 Photos by Jon Springer
Frank Yiannas, VP of food safety for Walmart, speaks about transparency in the food system during a presentation at the retailer’s annual Shareholders Week.
Issues & Trends>Food Safety

Wal-Mart Stores on Thursday revealed encouraging results of a test of blockchain technology to aid food traceability and safety, demonstrating it could cut the time involved in tracing the journey of food products from the farm to its shelves from nearly a week to less than three seconds.

The test, in partnership with IBM, began last year in China, and could have wide-ranging benefits for Walmart and the larger food industry to tackle the cost of food waste, more quickly identify and contain foodborne illnesses and fraud and facilitate compliance with safety regulations, while meeting customer demand for transparency in the food system, Frank Yiannas, VP of food safety for Walmart, said Thursday in a presentation as part of the retailer’s annual Shareholders Week events in Bentonville, Ark.

And though the program has benefits for Walmart that could result in lower prices, fresher in-store product and more efficient logistics, Yiannas said the company did not intend to use blockchain as a competitive advantage and instead encouraged participation from suppliers, other retailers and stakeholders along the food chain. Blockchain technology provides a permanent record of transactions that are grouped in digital “blocks” and cannot be altered, said Brigid McDermott, VP of IBM’s blockchain business development. Applied to food safety, it could serve as an alternative to traditional paper records and manual inspection systems that Yiannas said could leave supply chains vulnerable to inaccuracy or fraud.

“While we are enamored and really excited about the blockchain technology that’s enabling us to do this, really there are business challenges we’re trying to solve.”

“It’s been reported that a 1% reduction in foodborne disease in the U.S. would amount to about a $700 billion saving to the U.S. economy,” Yiannas said. “But it’s more than just cost, it’s people. The CDC [Centers for Disease Control] estimates that about 48 million Americans will experience foodborne illness in the U.S., and the global numbers are even larger.”

Walmart tested the blockchain solution in China using pork, and in the U.S. using mangoes, digitally tracking them farm to store using a scan. Product information, such as details of the farm, batch numbers, factory and processing data, expiration dates and shipping details, is digitally connected to the items.

In a demonstration of the technology, tracking information inputted to the software from a label on a package of sliced mangoes -- a process Yiannas said took nearly seven days using previous methods -- revealed their origins to two farms in Mexico and their stops along the way, in 2.2 seconds.