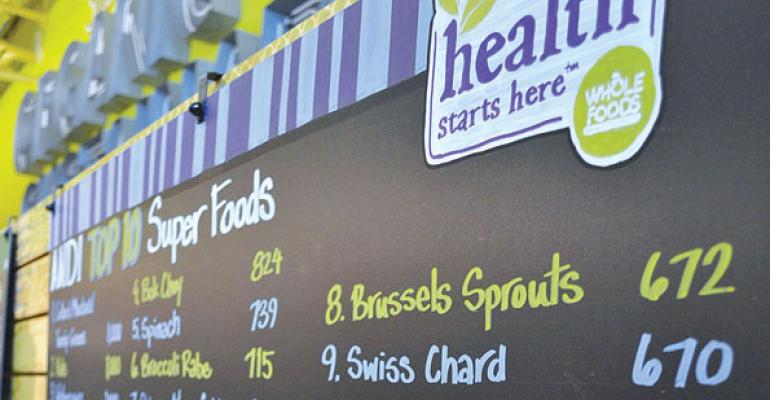 ANAHEIM, Calif. — Employees of Whole Foods Market who participated in an in-house health assessment and support program reduced their weight by an average of 7% at the end of a six-month period, according to one of the initiative’s organizers.

Health Starts Here was introduced in January 2010 to Whole Foods customers looking to improve their health through diet. The program combines products, education and support in a step-by-step curriculum based on recommendations made by the Engine 2 Diet. That effort was created by an Austin firefighter and triathlete named Rip Esselstyn. Esselstyn’s book of the same name caught the attention of Whole Foods’ co-Chief Executive Officer John Mackey, who adopted the diet for himself and subsequently began working with Esselstyn’s Engine 2 For Life in late 2009 to create Health Starts Here.

“Combined, Type II diabetes, stroke, the most common cancers, hypertension and obesity are responsible for two-thirds of the this country’s health care costs,” said Reiser. “We knew that. John Mackey knew that. What if the rest of Whole Foods Market knew what John knew?”

The retailer employs more than 57,000 people, known as team members. It is self-insured and spends $200 million a year on health care. While Health Starts Here was originally developed for shoppers, Esselstyn and Mackey believed that expanding it to team members would have tangible benefits and not just on worker health.

“It’s something every company knows, no matter how large or small they are,” Reiser told listeners. “Healthy people cost less.”

The initial group of workers were recruited to participate in Health Starts Here and subjected to the same basic program as the one offered to customers. The “Whole Foods Market experiment,” as Reiser called it, was designed to enroll frequent benefits users. The group attended “immersion” sessions at an off-site location, where they learned the basic tenets of the program. They include the Four Pillars of Healthy Eating (whole foods, plant-strong foods, healthy fats and nutrient-dense foods), as well as an introduction to the 28-Day Challenge, which encourages turning the program’s suggestions into habits.