The changes are supported by the Healthy Supermarkets initiative, a partnership between Foodtown, the Bedford Stuyvesant Restoration Corp., the New York Food and Fitness Partnership and the Partnership for Healthier Brooklyn, with the support of the city’s Department of Health and Mental Hygiene. 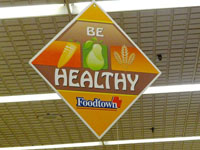 Changes at the store include moving sugary snacks away from racks near checkouts and replacing them with natural products such as nuts, water and dried fruit, Foodtown said. Customers can also find healthy foods easier as a result of new signs and shelf-talkers that call out healthier options as well as a “Buy Local” produce initiative and “Be Healthy” specials in weekly sale circulars.

The store, owned by Foodtown PSK, will host an event Friday to kick off the initiative, including healthy food demonstrations given by Cornell University Cooperative Extension, Isabahlia Ladies of Elegance Foundation, Gardein, Taft Food Masters and Super Foodtown. City Harvest will conduct shopping tour including tips for healthy shopping on a budget.