Tough times imparted valuable lessons to the health and wellness industry, say respondents to SN Whole Health’s annual WH Asks poll. After a few sobering years that saw the recession and its aftereffects play out, companies have fought back with go-to-market strategies that are anything but niche. 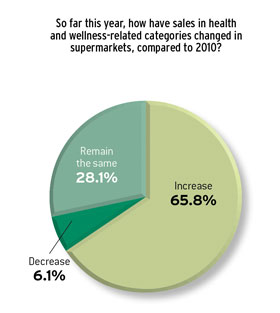 “Supermarket retailers are pricing more aggressively to compete in this space, reducing the historical premium associated with these sales,” noted one respondent.

Fueling these efficiencies is renewed consumer interest in standards like organic, which 42% of polltakers picked as the health and wellness topic with the most consumer awareness. Specialty products like gluten-free and functional also continue to generate excitement, with benefits making their way into many leading brands.

“More health and wellness attributes are being added to mainstream products,” another respondent wrote.

Mirroring this momentum, however, are concerns both practical and ideological. Some think the growth of health and wellness overshadows its low volume. Others believe there’s a lack of integrity in labels like “natural” and “local” that could undermine the movement.

“Consumers still respond to the word ‘natural’ as a positive, but the word is meaningless,” observed one of those polled.

Such concerns are nothing new, but they become more of a liability as consumer awareness spreads to cover more mainstream shoppers. So while business is booming once again, a bit of housekeeping may be in order to prevent another dreaded downturn.

By all accounts, natural and organic companies have had an outstanding year. Whole Foods recently reported $10 billion in yearly sales for the first time ever. United Natural Foods, meanwhile, reported a 20% sales gain in fiscal 2011, and Hain Celestial Group tallied a 23% increase for the same period. 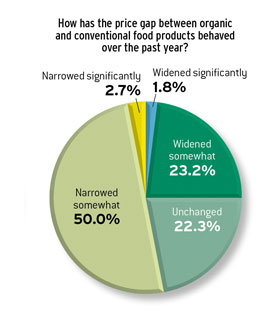 Results from these bellweather companies can be a barometer for the larger movement, and WH Asks responses prove that’s indeed the case. In all, 66% believe sales of health and wellness products at supermarkets increased over the past year. That’s a slight increase from the 2010 survey, in which 64% of respondents reported a sales increase. What’s more, fewer polltakers saw a decrease in sales — 6% this year versus 10% in 2010.

Industry stakeholders are noting, however, that growth is contingent on several factors gaining strength as the movement matures. Consumer awareness continues to deepen as shoppers become more particular about what they buy. Rather than shovel any product with “low fat” or “all natural” on it into their carts, they’re scrutinizing labels and ingredients lists.

“People are making more of an effort to read labels and understand what they are consuming based on food scares and diseases,” wrote one person. 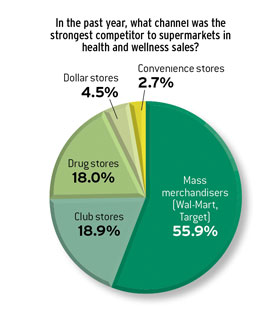 As one respondent pointed out, increased demand and availability have brought mainstream efficiency to the organic industry.

“As demand increases for organic foods, price as well as supply have countered by remaining stable in the face of price increases of raw materials,” the person noted.

This sort of efficiency has taken whole health products from the co-op to the club store. Indeed, three-quarters of those surveyed see mass merchandisers and club stores as the strongest current competitor for health and wellness sales. Last year’s poll yielded the same percentage, and in both cases more than 70% of respondents believed these stores championed lower prices as the differentiating factor.

But it’s not the only factor. More than twice as many stakeholders in this year’s poll (23% versus 9.5% in 2010) see increased selection as a competitive advantage for Wal-Mart, Costco and others.

“Organics seem to be everywhere these days,” a survey taker noted.

For the first time since the WH Asks poll began questioning the industry in 2005, there seems to be burgeoning sense that the “mainstreaming” of health and wellness has been somewhat exaggerated — even commoditized. Several people opined that advocacy and media attention have hyped healthful products, overshadowing the fact that they still constitute a small percentage of total sales.

Organics, for one, may be showing double-digit growth, one polltaker pointed out, but they still only account for 4% of total sales.

“Everybody and their brother has jumped on this bandwagon under the promise that sales are growing exponentially when, really, it’s on an incredibly small base,” the person stated. “They never justify their allotment on retail shelves.”

While there may be questions over mainstream momentum, there’s no debating that health and wellness is a dynamic, ever-evolving category in and of itself. New trends develop while old ones fade away, and every year brings a spirited contest as various claims and standards vie for shelf space. 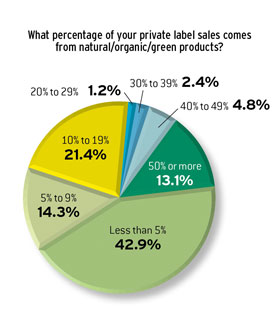 In 2009, the top wellness trend according to stakeholders was natural and organic private label, followed by whole grains and certified-organic products. Last year the tables turned, with whole grains claiming the top spot, largely due to an increase in manufacturer rollouts and promotion from organizations like the Whole Grains Council.

This year’s poll showed gluten/allergen-free in first place, with 30% picking it as the top trend, followed by organic at 17.5% and whole grains at 16%.

It’s interesting to note what’s happening outside of the top trends, as well. Omega-3s, which have been promoted in foods due to their heart and brain benefits, were listed as one of the top three trends by 29% of stakeholders in 2010, but by only 14% this year. Similarly, the low-sodium trend received top-three mentions from 31% of respondents last year, but only 18% this year.

Natural and organic energy drinks, on the other hand, have burst onto the retail scene and were listed as a top-three trend by 24% of polltakers, all of which goes to show how fierce the competition is in a category that’s full of young, hungry companies and subject to questionable claims.

“Little by little, larger amounts of products are moving to the health and wellness platform, including some that don’t really belong,” observed a respondent.

The constant shifts in hot-button claims and ingredients are part of whole health’s appeal as a category. But this year’s poll results also highlight the value of enduring social and agricultural principles. Organic (81%) and fair trade (39%) were two such standards that stakeholders said enjoy a high level of consumer awareness. A newer cause that’s making waves is the non-GMO movement, with products certified by the nonprofit Non-GMO Project hitting $1 billion in sales this year. Forty percent of respondents picked this topic as one of their top three in terms of consumer awareness.

Another enduring segment of the whole health category is natural and organic private label. Back in 2009 — when the recession was still in full stride — it was the top wellness trend with 44% of votes. That sentiment held up last year, with 53% of polltakers saying consumers were continuing to choose healthy private label over brands.

“Private label is taking much more share in the organic market across all categories as consumers see the private label and branded items as the same,” noted one person in the 2010 WH Asks poll.

“Store brand sales have continued to climb,” noted a retailer in the 2011 survey.

Retailers and manufacturers hope to expand private label and other choices, but there are inconsistencies that merit attention as consumer awareness grows. Local products, for instance, have seen steady growth at retail over the past couple of years, yet there remains no consensus as to what, exactly, “local” is. Interpretations vary widely. When asked what their company considers to be local, poll respondents answered with everything from within 5 miles to within 250 miles to within 1,000 miles to, simply, “I don’t know.”

Similarly, those polled expressed concerns over claims like “natural” and “free range”, which are loosely defined by the U.S. Department of Agriculture compared to standards like organic.

“The consumer is confused as to the viability and expense of organic versus all-natural items,” one respondent wrote.

Just as companies have evolved their operations to move health and wellness products into the mainstream, so have they updated their outreach efforts to compete in the digital age.

Luckily for retailers and manufacturers, health and wellness is a perfect fit for the online world. Many of the products appeal to young, plugged-in consumers and inspire lively feedback in comment sections, chats and message boards. Because there’s a learning curve to understanding standards like organic and fair trade, websites also serve as a valuable repository of information. Retailers like Whole Foods Market offer recipes and news updates, while others feature dietitian blogs and product promotions. The possibilities, it seems, are endless.

Survey takers were asked what sort of health content their websites offer, and their answers raise the fundamental question of what role a food company’s website should play. Fifty-six percent said their health and wellness content includes featured products — a natural outgrowth of the companies’ role as food vendors. Others, however, offer tools and information outside the purview of their business, the top two being healthy recipes (60%) and health condition links (33%).

No matter what approach companies take, one respondent believes, the focus needs to be on education.

“Consumer education is a key effort for our health and wellness clients, and it’s baked into most of their marketing efforts,” one industry veteran wrote of his company’s customers.

The range of tools for communicating with shoppers has widened considerably. Safeway and Whole Foods feature nutrition-related blogs written by various staff members, while Ingles’ website has a weekly column penned by its corporate dietitian. Formats like these allow for interaction with shoppers, and are an opportunity for companies to be informal while gaining valuable feedback.

Even though only 25% of respondents reported having a health and wellness blog on their website, it’s clear survey takers have healthful ambitions for their company — and a desire to promote themselves in the digital realm. Sixteen percent said their company hired one or more dietitians in the past year, a 6% uptick from last year’s poll. Thirty-three percent, meanwhile, mentioned that they created or hired a management-level position in social media, compared to 19% last year.

The increase in social media positions isn’t surprising given retailers’ enthusiastic embrace of Facebook, Twitter and other programs. Just about every mainstream supermarket has a presence in this area, posting and tweeting regularly about product promotions, company news, and more. Seventy-four percent of survey takers said their company uses social media for promotional offers.

Despite their zeal for promotions, companies may be overlooking opportunities with outside firms like Groupon and LivingSocial. Earlier this year, Whole Foods offered a pay-$10-get-$20 deal through LivingSocial that sold out in less than 24 hours. Granted, Whole Foods has a unique following within the industry, but demand that explosive surely indicates an opening for the rest of the industry. Yet according to this year’s survey, only 6% of stakeholders utilize flash sale sites like Groupon and Living Social.

Fully leveraging online marketing’s potential doesn’t seem at all farfetched for an industry that’s done so much offline. Companies are selling reusable bags, installing solar panels, starting wellness clubs and rating the nutritional quality of the food they sell. Half of all respondents say their companies have started solid waste reduction and recycling campaigns, while 27% say they’ve created executive-level “green” positions.

As one thoughtful respondent to this year’s poll shows, there are all sorts of creative possibilities when it comes to health and sustainabilty.

“We recently purchased carbon offsets for employee commutes to and from work annually,” the person wrote.

This year’s WH Asks poll was conducted online by Penton Media from Oct. 11 through Oct. 28. Analysis was based on 118 completed surveys: 23% self-described as retailers, 12% as food wholesalers, 38% as manufacturers, 10% as sales agencies and 17% as “other.”