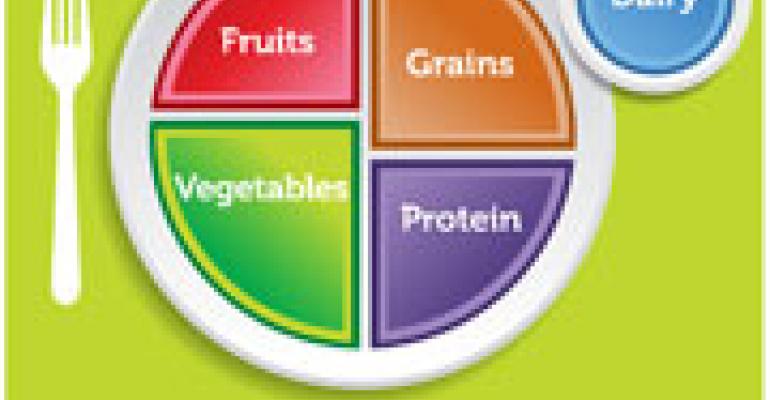 WASHINGTON &#8212; The U.S. Department of Agriculture, as expected, on Thursday unveiled a new icon to encourage healthful eating, dubbed "MyPlate."

WASHINGTON — The U.S. Department of Agriculture, as expected, on Thursday unveiled a new icon to encourage healthful eating, dubbed "MyPlate."

The UDSA launched choosemyplate.gov to introduce consumers to the new effort, which replaces MyPyramid.gov. The pyramid symbol, which had been in use since the early 1990s, was "too complex to serve as a quick and easy guide for busy families," USDA Secretary Tom Vilsack said at a press conference here Thursday introducing the new icon.

The MyPlate symbol, by contrast, is "a simple, visual icon that sends a message about what should be on people's plates," he said. Also speaking at the conference, First Lady Michelle Obama added, "I am confident families will find this useful, and they will find it useful right away," noting that it dovetails with her "Let's Move" campaign promoting healthy eating, access to affordable and nutritious foods, and exercise.

"This new icon will serve supermarket shoppers as a vivid reminder of what to put in their shopping carts so that it will later become part of a well-balanced plate," said Leslie G. Sarasin, president and chief executive officer, Food Marketing Institute, in a prepared statement. Added Tom Stenzel, president and CEO of produce trade group United Fresh, "The breakthrough message to 'make half your plate fruits and vegetables' is simple, compelling and effective. It is a message that consumers can practice every day at every meal."