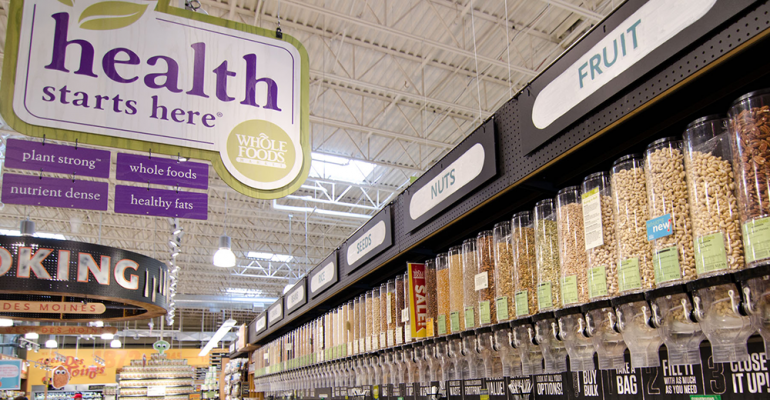 Connecting to customers with wellness

As diet fads and eating trends come and go, grocery retailers are stepping up efforts to help consumers better understand nutritional options for improving their health and wellness.

Retail dietitians and nutritionists say the place of purchase — in-store or online — has become the decision point for many customers, whether they seek foods to meet special dietary requirements, address certain health conditions or just eat smarter. That has positioned retailers to help shoppers cut through the deluge of advice from online, social, broadcast and print media so they can find what they need and make wiser choices. 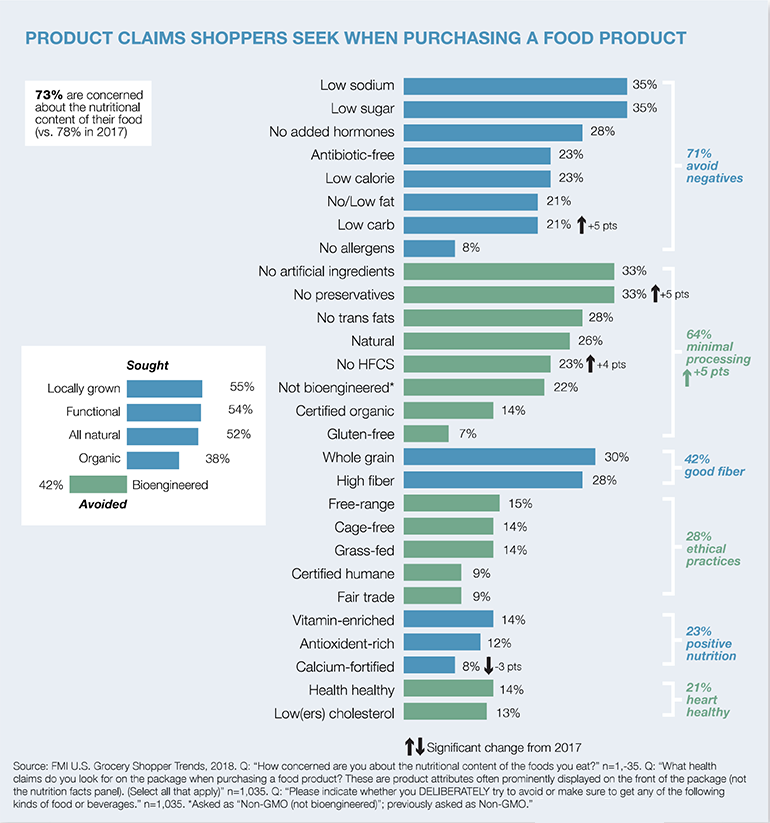 While many Americans have dabbled in various kinds of diets, no single one dominates, according to The Hartman Group’s most recently released Health + Wellness study.

Forty-four percent of U.S. consumers surveyed said they’ve tried some sort of diet within the past year. Among specific eating approaches, low-carb led the field, cited by 12% of respondents. Gluten-free and dairy/lactose-free were each named by 11%, followed by vegetarian at 10%. Garnering 9% apiece were Weight Watchers and whole food (such as Whole30) diets as well as juice cleanse or detox. Six percent of consumers reported trying intermittent fasting, and vegan and paleo diets were each cited by 5% of respondents.

Hartman’s research also showed that Americans have definite opinions on the obesity epidemic and its health consequences: about 75% believe people eat too many processed foods and too much sugar.

The ketogenic diet saw a surge in popularity during 2018 and continues to be in vogue this year, retail dietitians and nutritionists say.

An extremely low-carb, high-fat diet, keto involves slashing carbohydrate intake and replacing it with fat to put the body into a metabolic state called ketosis. Health benefits reportedly include more efficient burning of fat for energy, more energy for the brain, reduced sugar and insulin levels, and better weight management.

“There’s a mountain of research on the keto diet and all of the different ways that it can support health,” said Shelby Miller, manager of nutrition, research and education for Natural Grocers by Vitamin Cottage. “Shoppers have been asking about the keto diet. We see this as a trend, and we see that it’s popular.”

In January, the Denver-based grocery chain launched Keto Reset, a six-week program led by its nutritional health coaches and based on the book The Keto Reset Diet by Mark Sisson.

“It’s a group coaching session where customers learn about the keto diet and the ins and outs,” Miller said, adding that the program will be relaunched this month. Natural Grocers also highlights some keto-friendly products in stores with shelf tags and endcap displays. “We’re seeing the customer demand, and that’s how we’re meeting it.”

“It’s constantly evolving. You never know which ones are going to catch on and which ones will head out quickly. Ketogenic is still a big diet and lifestyle choice. And there are the standard vegan and vegetarian styles, which are pretty prominent. Whole30 is another one, and paleo still is pretty strong. Those are the ones that have the highest amount of traction,” Waters said. “There are also some variations, such as ‘pegan’ — paleo-vegan — and part vegetarian/part keto. And, of course, there are the Mediterranean and DASH diets, which have a tremendous amount of research backing them but aren’t as trendy."

“Anecdotally, I saw a huge uptick in 2018 of people trying to be more plant-based in their diet,” she said. “It’s been very interesting to see people change to a more plant-based diet, whether that be for health or environmental reasons. I think the message is really getting spread that plant-based diets are both healthy and sustainable.”

This year on its blog, Giant plans to focus some content on plant-based food, including such topics as “plant protein on a budget” and pointing to simple foods like beans, lentils, nuts and seeds, according to Craft. Also continuing to rise in popularity is non-dairy milk, including oat milk, almond milk and now pea protein in milk. “All of those had a huge push in 2018 and are continuing to take over shelves in 2019,” she said. 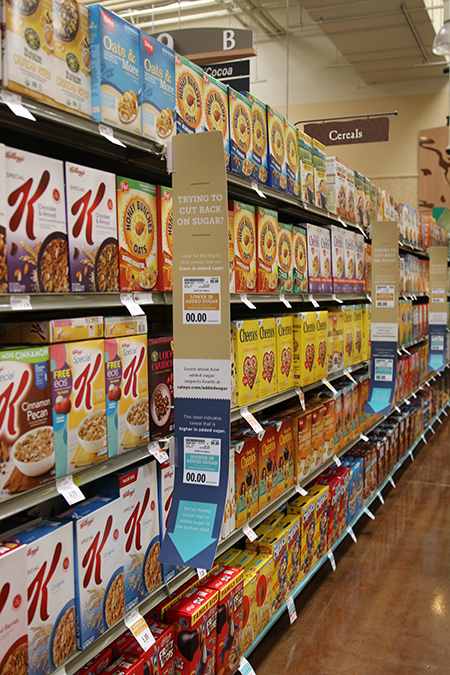 “We are building out more attributes to have a wider range, focusing on a lot of different categories by lifestyle, including for ailments, dietary preferences, certifications and sustainability,” Waters said. “I can say that Shelf Guide 2.0 has several more attributes that are custom to Raley’s and known around the industry.”

In November, Raley’s began revamping the layout of the cold cereal section to give prime shelf placement to products with less added sugar. The change moved cereals with 25% or more of total calories from added sugar to the bottom shelf. Raley’s owner and CEO Mike Teel also launched “Minute with Mike Teel,” a video series focusing on the amount of added sugar in food products and the need for change in the industry. The grocery chain, too, provides consumers more insight on added sugar in food through animated videos and content marketing at Raleys.com/addedsugar.

And in September, Raley’s eliminated conventional candy from the checkout lanes, reducing the section’s overall sugar offerings by 25%.

“We aren’t just stopping in the cereal aisle,” Waters said. “We are going to continue to categories across the store to inform people about food products with ‘hidden’ added sugar and highlight the ones that are starting to reformulate and look into it more.”

Giant Food in late January launched “Nutrition Made Easy,” a biweekly podcast by the retailer’s dietitians and nutritionists to answer customers’ wellness questions and provide them steps for leading healthier lifestyles. Craft said the series includes a clinical track to help customers manage a health diagnosis — such as diabetes, prediabetes or hypertension — and a consumer track that addresses a range of food topics and gives shoppers advice on what to put in their carts.

“It’s a 15- to 20-minute podcast that not only provides education but also points people to the things on the shelves at Giant Food that they can use for those specific conditions,” she explained. 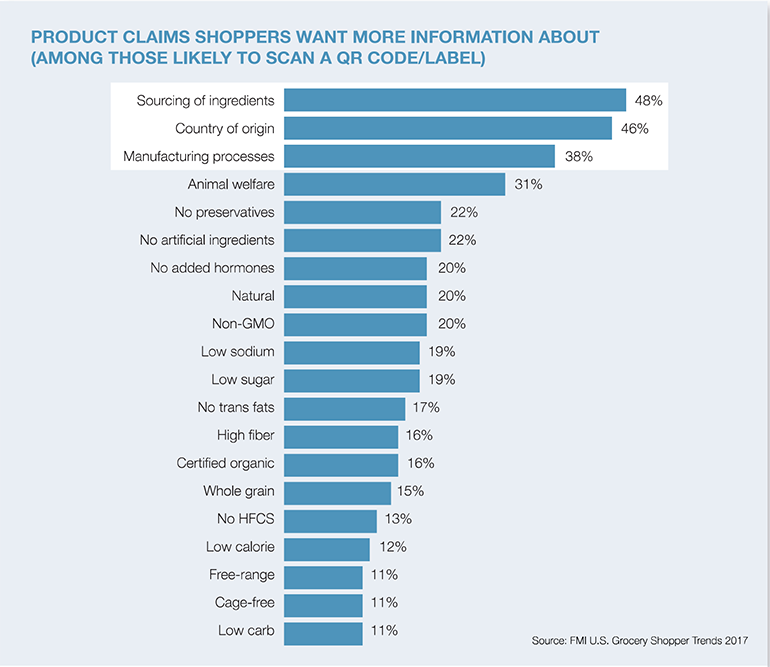 About a year ago, Giant introduced Guiding Stars, a star-based rating system for food and beverages that credits points for nutritional qualities like fiber and extra vitamins/minerals and debits points for saturated fat, trans fat and added sugar.

“We also provide Wellness Walks, which are store tours. And when we do those tours, we show customers the Guiding Stars ratings. I have customers who come back and say, ‘I told my friends, and now we’re using this rating,’” Craft said. “Customers who use the system find it really helpful.”

At Natural Grocers, each store houses a customer literature file cabinet “jam-packed with hundreds of documents on just about every health question under the sun,” Miller said. As part of a website update, the retailer also is adding a feature to help shoppers to locate products for certain diets.

“We’re revamping our recipe-finding page so that people can refine their recipe search to meet their specific diet goals,” Miller said. “Diets that can be selected include paleo, gluten-free, primal, ketogenic, vegan, vegetarian and dairy-free, among others.”

As more consumers rethink their diet, many are finding it tough to sort through the proliferation of new product choices, nutritional information and label claims.

“It can be overwhelming, with new products coming out all the time, the amount of stuff on the packaging, and questions about whether product claims are really helpful or just for marketing,” Raley’s Waters said. “That is a huge challenge for consumers.” 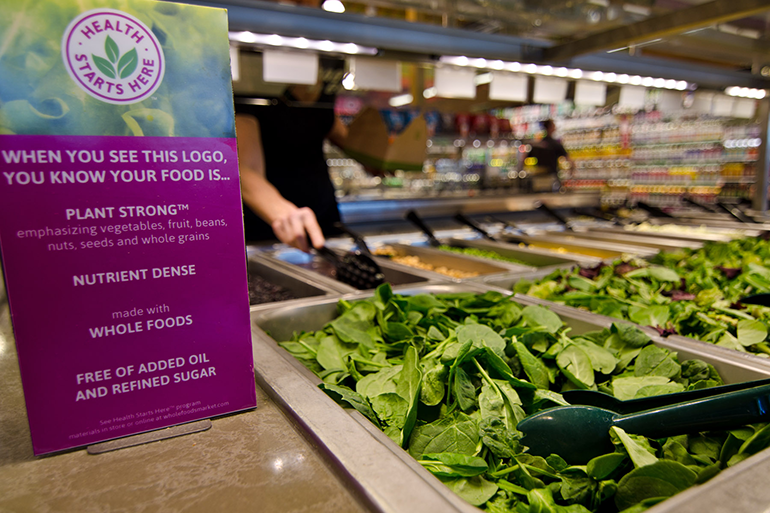 “People have become more interested in the ingredient label and are hunting for short ingredient lists,” Natural Grocers’ Miller said. “They want simple ingredients, and ingredients they recognize.”

And who do customers trust to help them with their health and wellness? The grocery store, for one. According to FMI, 55% of consumers see their primary food store as a health ally, and 41% see food stores in general that way.

In each store, Natural Grocers has nutritional health coaches who can provide customers with free one-on-one consultations. “They are credentialed individuals with huge knowledge bases. And for just about any health topic you come to them with, they can coach you on how to follow a particular diet in a healthy way,” Miller said. “Getting this kind of information from our coaches is probably the best way for customers, because they’re in the store. Not only can we give them the information and empower them to make these health choices, but then we can also walk them through the store and help fill up their basket with what they need.”