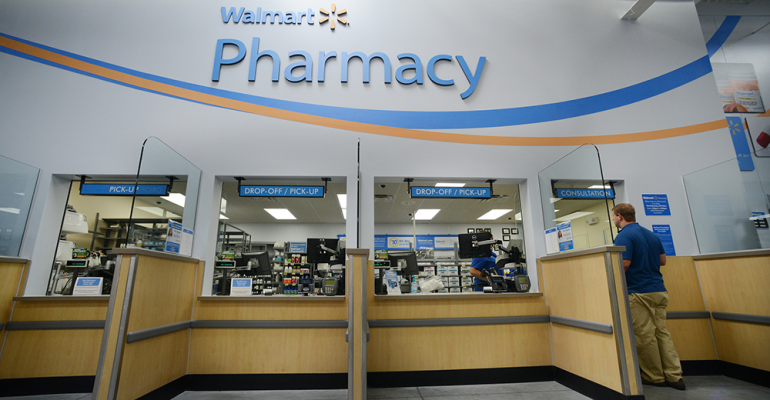 Walmart
In the suit, Walmart Inc. v. DOJ, Walmart asks the court to clarify the roles and responsibilities of pharmacists and pharmacies under the Controlled Substances Act.
Issues & Trends>Health & Wellness

Walmart has filed a lawsuit against the U.S. Department of Justice (DOJ) and the Drug Enforcement Administration (DEA) over the responsibility of the company and its pharmacists in flagging suspicious opioid prescriptions.

In the suit, Walmart Inc. v. DOJ, filed yesterday in the U.S. District Court for the Eastern District of Texas, the Bentonville, Ark.-based retail giant asks the court to clarify the roles and responsibilities of pharmacists and pharmacies under the Controlled Substances Act (CSA).

At issue is a dilemma faced by pharmacists when dispensing opioid painkiller medications: Deciding whether not filling potentially illicit opioid prescriptions — i.e. those suspected of drug abuse or diversion by the patient — interferes with the medical decisions of doctors licensed the prescribe controlled substances.

Walmart said it filed suit in response to threatened litigation by the DOJ, which the company claims seeks civil penalties against the retailer for not going far enough in blocking doctors by refusing to fill opioid prescriptions.

“We are bringing this lawsuit because there is no federal law requiring pharmacists to interfere in the doctor-patient relationship to the degree DOJ is demanding, and in fact expert federal and state health agencies routinely say it is not allowed and potentially harmful to patients with legitimate medical needs,” Walmart said in a statement Thursday. “DOJ is forcing Walmart and our pharmacists between a rock and a hard place. At the same time that DOJ is threatening to sue Walmart for not going even further in second-guessing doctors, state health regulators are threatening Walmart and our pharmacists for going too far and interfering in the doctor-patient relationship. Doctors and patients also bring lawsuits when their opioid prescriptions are not filled.”

With more than 5,000 pharmacies, Walmart is the nation’s third-largest pharmacy retailer, behind CVS Health and Walgreens. Walmart noted that its pharmacists have helped fight the opioid crisis by informing patients about the risks of these medications and refusing to fill hundreds of thousands of opioid prescriptions deemed problematic. The company said it also has worked with investigators and experts to block thousands of questionable doctors from having their opioid scripts filled by Walmart pharmacists, as well as assisted law enforcement in bringing these physicians to justice.

In threatening a “completely unjustified lawsuit,” the DOJ contends in hindsight that Walmart pharmacists should have declined to fill opioid prescriptions written by doctors that the federal government has approves to prescribe these drugs, according to Walmart.

“Walmart and our pharmacists are torn between demands from DEA on one side and health agencies and regulators on the other, and patients are caught in the middle,” Walmart stated. “We need a court to clarify the roles and legal responsibilities of pharmacists and pharmacies in filling opioid prescriptions.”

Earlier this week, the DOJ announced that OxyContin maker Purdue Pharma agreed to plead guilty to federal criminal charges as part of a settlement of more than $8 billion in connection with the company’s role in fueling the opioid epidemic. As part of the agreement, Purdue Pharma will be dissolved. The Associated Press reported that the settlement represents the “highest-profile display yet” of the federal government attributing a measure of responsibility to a major pharmaceutical company for the opioid crisis.