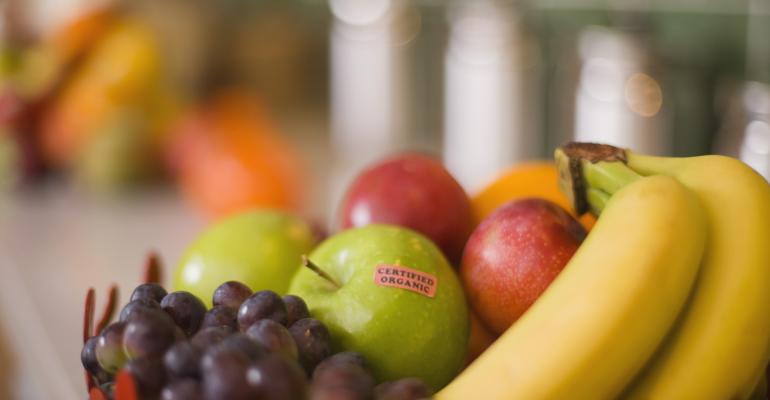 How much more is organic, really? Health and wellness is important to consumers these days, which translates to a big boon for produce departments in supermarkets around the U.S. And that’s meant more sales for organic produce too. But with inflationary prices, how much more are consumers willing to spend on organic? And how much more does it really cost to choose organic? CNET put together this organic vs non-organic price comparison, via data from online retailers FreshDirect and Amazon Fresh. The results? About 20% more for organic on average. And the most expensive organic category? Meat. —Chloe Riley

Instant healthcare: Grocery delivery companies like Gopuff and Instacart are stepping into health care territory, much like their big-box retail counterparts. This month, Gopuff launched a new private label, Goodnow, that offers over-the-counter medications. Instacart, too, now offers a set of health care initiatives, called Instacart Health, which include the rollout of expanded health tags like “gluten-free” and “low-salt.” Why should grocery care? Walmart is making firm moves into this space via its Walmart Health expansion, and it’s a category that’s rapidly growing. According to a recent consumer survey, 80% of respondents said they plan to maintain or increase spending on health and fitness-related categories in the next year. —CR

Venus and Mars and grocery: When it comes to food choices, apparently there’s not much difference between women and men, according to a survey by Purdue University’s Center for Food Demand Analysis and Sustainability. Of 1,200 respondents in four categories — women, men, married, unmarried — all indicated that they sometimes choose private-label foods over brand-name foods. All four groups also said they seldom choose plant-based proteins over animal-based products. What’s more, the four groups ranked six categories of food attributes virtually the same from top to bottom in order of importance when food shopping: taste, nutrition, affordability, availability, environmental impact and social responsibility. Evidently the battle of the sexes does not apply to the aisles. —Russell Redman

Whole Foods quietly raising prices on small brands: Whole Foods is hiking prices on some emerging food brands, according to reporting from Insider — increases that suggest a change in strategy for the Amazon-owned grocer. The higher prices come after several rounds of price cuts at Whole Foods in the years after Amazon acquired the grocery chain in 2017. The price increases also suggest that Whole Foods may have lost its reputation as a place for emerging brands to get their start. We’ll keep an eye on it. —CR

What’s the most popular grocery store in your state? Information insights platform Wise Voter recently identified the most popular grocery stores in each state by gauging actual foot traffic. Unsurprisingly, it was largely a regional affair and led by big supermarket operators. Albertsons ruled the Pacific Northwest and Upper Midwest, with Hy-Vee leading much of the Midwest. Trader Joe’s was tops in the most-populous state, California, while H-E-B (Texas), Safeway (Florida) and ShopRite (New York) came out on top in other big-population states. Kroger led the Upper Southeast/Lower Midwest, with Meijer prominent in the Great Lake regions. Ahold Delhaize USA dominated the East Coast. Some surprises: Aldi was first in Oklahoma and Sprouts Farmers Market in Kansas. Piggly Wiggly was first in Wisconsin. —RR