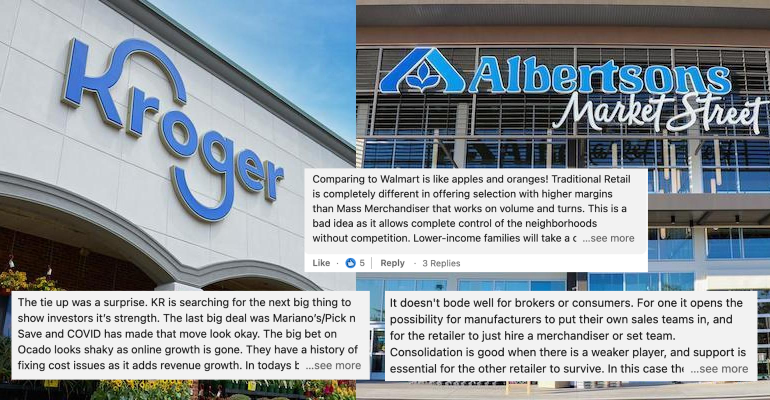 5 things: Your thoughts on Kroger + Albertsons

5 things you may have missed in grocery.

Kroger. Albertsons. Your thoughts. On our SN LinkedIn poll, you all had some great nuanced insights, on both sides of the fence. Here are some highlights:

Big savings in tiny billboards. Anyone who has shopped at Aldi stores is familiar with the discount grocer’s clever in-store signage — for example, “My Belly and My Bank Account Are Happy” and “We Went From Spending $400 Every Week to $400 Every MONTH.” Now Aldi has taken that on the road in a new out-of-home ad campaign starring miniature, interactive billboards. Backed by social media, the campaign asks consumers to seek out the tiny placards — deployed in high-traffic sites in Atlanta, Dallas and Minneapolis — and scan their QR code for a chance to win free groceries for a year. Ten billboards are put up daily in each city during the campaign. —Russell Redman

The ups and downs of soup. Consumer demand for at-home meal solutions has been strong. Couple that with rising inflation and you’ve got ripe conditions for sales growth in shelf-stable soups. But the people want more variety, and the market isn’t necessarily delivering. According to a Portland, Ore.-based director of grocery, customers are seeking lighter, better-for-you varieties, but he’s not seeing many options in that vein. “I continue to look for new soup brands…I’m looking for items that will set us apart from the large conventional stores and national brands.” In addition, the demand may be there, but some grocers are still seeing issues with supply chain. —CR

Waste not, want not: Each year, an estimated 80 billion pounds of food is wasted in the US. The largest share of that, 43%, is at consumers’ homes, but the retail level comes in as a close second (40%), with grocery making up around 30% of that retail slice – a whopping 9.6 billion pounds per year. One option for handling this kind of waste is using it as feed for animals, but this has historically been a challenge, especially for urban environments. Enter start-up company, Do Good Foods, which has created a network to collect the non-contributory food from the stores, process it, and then use it as part of the feed on poultry farms. Store employees handle sorting, and then Do Good processes, pasteurizes, and makes the connection to farmers, with each chicken equating to about four pounds of food saved from the trash bin. Not a bad start. —CR

Pizza, PIZZA. What doesn’t the internet love more than a full minute of panning over 14-plus stocked commercial glass door freezers full of only frozen pizza? A viral video of  “never-ending” pizza in a Woodman’s Market store in Kenosha, Wisc. now has over 6.1 million views. How can they afford to dedicate that much shelf space to frozen pizza? Well, it’s Woodman’s. According to Clint Woodman, president of Woodman’s Markets: “We carry over 100,000 items in our stores…Price and variety is our niche.” In the pizza section alone, they stock 650 separate pizza facings and 50 different brands, taking up a total area of 600-square-feet in the store. Hey, if you’ve got the room (and the appetite), why not? —RR + CR