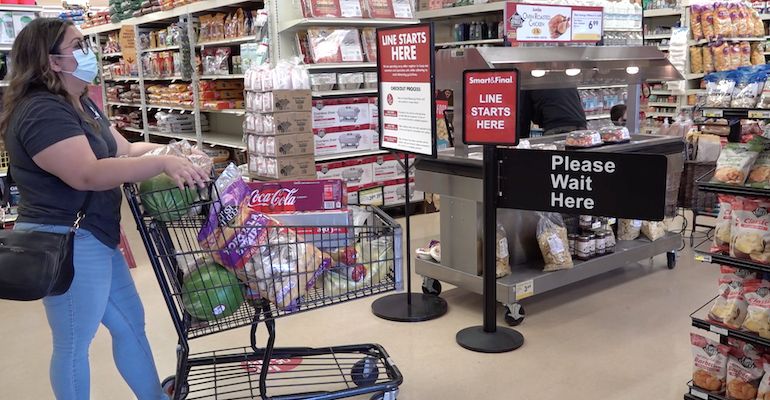 Shoppers named Amazon, Costco Wholesale, Walmart, Publix and Kroger as the top retailers in terms of their response to the coronavirus pandemic, according to consumer market research firm Magid.

Amazon led all food retailers, with 30% more customers saying they feel more favorable about the online retail giant’s COVID-19 response than those who feel less favorable about its efforts, the May 2020 Magid Food & Beverage Consumer Insights Tracker, which polled 1,000 shoppers. The only other retailers with a more favorable differential of at least 20% were Costco (+25%), Walmart (+22%), Publix (+21%) and Kroger (+21%).

Five other retailers had a more favorable differential of 19% for their coronavirus measures, including BJ’s Wholesale Club, Meijer, Whole Foods Market, Target and Trader Joe’s.

Respondents in Magid’s latest tracker, who were surveyed in early May, were asked how well retailers selling groceries and/or household supplies adapted to higher demand, busier stores and health concerns since the COVID-19 outbreak. 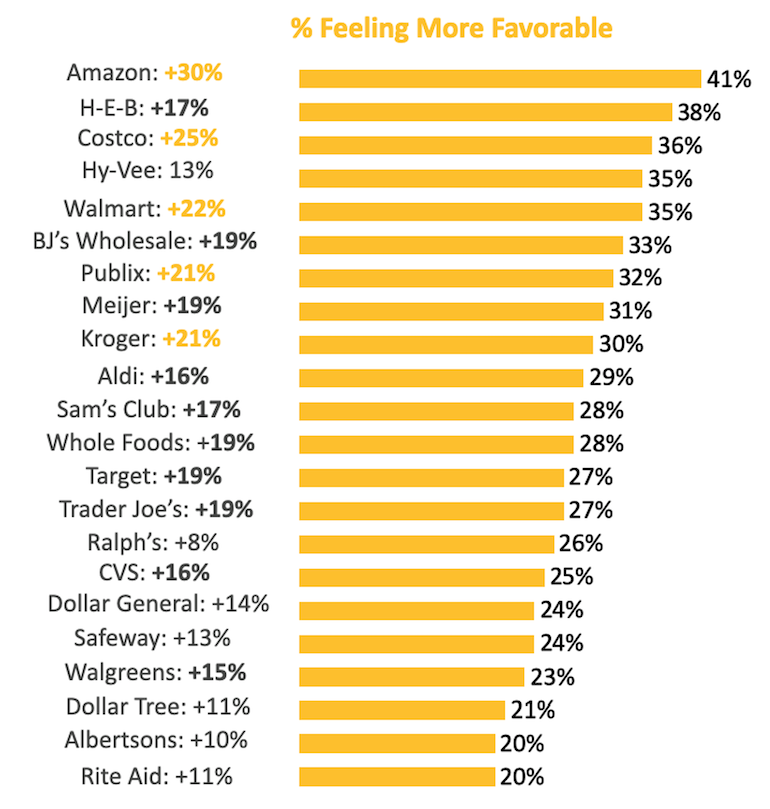 In its May 2020 tracker, Magid asked consumers which retailer's coronavirus response they felt more favorable about. The percentages on the left reflect the differential between those who cited a retailer as having a more favorable vs. a less favorable response.

“These retailers are putting the health and safety of their shoppers at the forefront and are doing their best to keep items in stock. They have effectively managed busier shopping times in stores, often designating special shopping hours for the elderly, and have limited the amount of people that can be in a store at a time,” said Steven Flynn, senior vice president of consumer and commercial brands at Magid.

Of those polled in the Magid’s May tracker, 28% said they’re shopping at one or more new retailers for food, beverages and other supplies. The top reasons were lack of supplies/product availability (32%), one-stop shopping (27%), location (23%), limits on number of shoppers in the store (22%), purchase limits on certain items (20%) and reduced hours (18%).

Interestingly, 18% said they switched retailers because of a preference to support smaller/local retailers at this time, while 17% cited price increases on food and supplies that are in high demand. Fifteen percent said their preferred retailer wasn’t taking the necessary safety precautions during the pandemic, and the same percentage indicated there were no special shopping hours for seniors and high-risk people.

Online shopping also played a role. Sixteen percent pointed to free online grocery delivery for getting them to go to another retailer, and 14% cited store pickup service.

Overall, 45% of respondents said they’re shopping online more now than before the coronavirus outbreak, up from 38% in the April tracker, Magid reported. Fifty-four percent spotlighted the ability to check the availability of products as an attribute when shopping online.

Shoppers were asked in both the April and May surveys how long they expected grocery shopping to return to normal after the pandemic subsides.

Social distancing is a key reason for online shopping as well, with 37% saying they don’t need to touch anything and 33% reporting there’s no in-person interaction.

“In the first wave of our study, we found that much of the switching between retailers was due to a lack of supplies/availability of products,” Flynn explained. “However, now we are finding that these consumers are sticking with these retailers because they are finding they are having a better experience at these stores and that they can get everything they need in one place. Other factors are that some shoppers are looking to save money due to the shifts in the economy or are interested in trying new products and brands for fun as they look to get through lockdown.”

And more consumers expect it to take longer for grocery and household supplies shopping to return to normal. Twenty percent of those surveyed by Magid now expect that process to take five to six months, the same as in the April tracker. But in the May poll, 9% said they think it will take seven to nine months (vs. 8% in April), 10% predict 10 to 12 months (vs. 7% in April) and 14% project more than a year (vs. 4% in April). Currently, the highest percentage of shoppers polled — 22% — expect a return to normalcy in three to four months, though that figure is down from 32% in April.

Health and safety practices topped the list of consumer concerns in terms of what retailers must do to earn customers’ trust to keep shopping with them, Magid found. Of actions that retailers can take, the most-cited was having sanitary wipes or a sanitation kit for shoppers at the front of the store (66%), followed by a sanitation mist to clean carts (65%), requiring face masks on all customers (62%), automatically opening doors (60%), seeing associates cleaning stores at all times (60%), limiting shopper capacity in stores (58%), employee temperature checks (57%), transparency into employee policies (57%), no-touch payment options (55%), protective gloves for shoppers or requiring their use (52%), UV light cleaning for groceries at checkout (52%) and curbside pickup (51%).

“Retailers need to put a heavy emphasis on proper health and safety measures to win back consumers,” Flynn said. “We found that having sanitary wipes and frequently using sanitary mists on shopping carts were the top actions that retailers can take to win back the trust of consumers and get them to return to their stores. Additionally, consumers would like to see self-service and curbside pickup continue, as it gives them the freedom to choose whether they would like to interact with employees or not.”