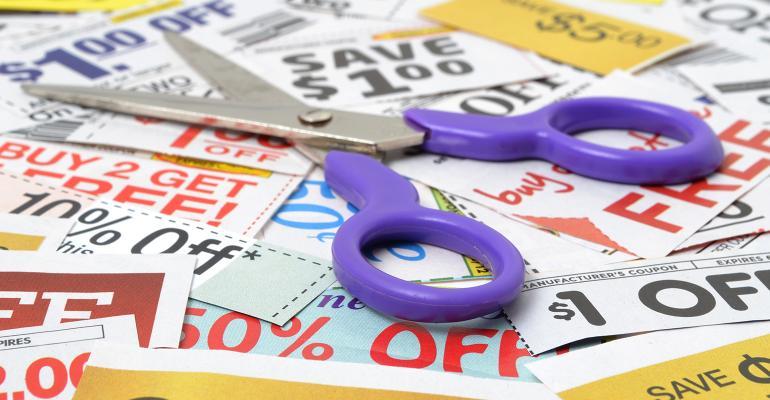 Of 1,000 U.S. adults surveyed, 52% said they’ve tried to use an expired coupon when shopping, and 48% attempted to use a coupon for products that don’t apply, Winston-Salem, N.C.-based Inmar said. What’s more, 63% of respondents said they try to apply multiple offers when purchasing an item.

Inmar’s research comes from two surveys: a consumer poll that aims to identify common shopper and retailer behaviors that could lead to coupon fraud, and a poll of 300 workers at CPG companies to gauge brands’ perceptions of coupon fraud and the way that they process it internally.

At the store level, customers appear to be successful at getting associates to secure savings from coupons that aren’t accepted. Inmar found that 56% of cashiers override coupons when they don’t scan to give shoppers the discount.

Whether coupon misuse is occurring on the shopper or retailers’ sides, counterfeit coupons and misredemptions cost the retail sector more than $100 million annually, Inmar reported. In its CPG survey, 64% of respondents said their company uses trade funds to cover deductions of counterfeit coupons, with 57% writing it off.

“Coupon fraud and counterfeiting are issues within retail. We have worked for decades to mitigate this risk for all parties involved,” John Helmle, executive vice president and president of financial technology at Inmar, said in a statement. “Through insights from our two surveys, the retail industry can better calculate the true cost of coupon counterfeiting and determine ways to eradicate it completely.”

Major industry players have begun clamping down on improper coupon usage and are demanding better accountability from trading partners, according to Mike Loyson, brand director of value delivery and couponing at Procter & Gamble Co.

“Recent industry movements to block counterfeit coupons at the point of sale [POS] are very encouraging,” Loyson stated. “P&G is committed to these efforts as eliminating fraud benefits shoppers, retailers and marketers alike.”

St. Louis-based grocer Schnuck Markets was the first retailer to deploy CNFRM and detected counterfeit coupons within the first week of use, according to Inmar. The company noted that the cloud-based CNFRM solution verifies scans within 50 to 200 milliseconds, providing accurate validation without slowing down shoppers at checkout. Inmar, a provider of data-driven technology services for retailers and manufacturers, among other sectors, said CNFRM also reduces CPG withheld payments on retailer-invoiced redemptions, provides full control over cashier experience and added protection against counterfeiters clearing shelves, and features an Inmar-maintained coupon database representing 90% of the offers in the market.

“We are committed to our pledge to end counterfeiting of coupons and have developed the tools to do so within three years,” Helmle added. “We look forward to the day when the retail industry is not losing millions of dollars to counterfeit activity and can continue to realize the awesome promotional marketing benefits of coupon price promotion.” a provider of data-driven technology services for retailers and manufacturers, among others.