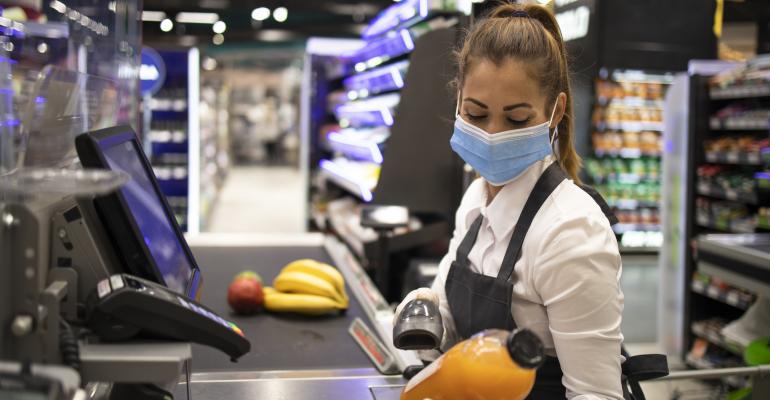 Getty Images
According to the survey, of UFCW members who got COVID, 59% said that they believed they likely contracted the virus in their workplace.
Issues & Trends

The United Food and Commercial Workers is partnering with the University of Nebraska Medical Center — which took in some of the earliest cruise ship COVID patients — in a study examining how the virus has affected union workers and what to do if a similar pandemic strikes it the future. The ongoing survey has run one year so far.

“What we did find was that our members were twice as likely to be reinfected within that year — and that’s primarily in my view because of the number of people that they came in contact with,” said UFCW International President Marc Perrone, backing that up by noting that the early stages of COVID saw dramatic increases in customer count — “stores that had 10,000 customers in a week might be seeing 10,000 customers in a day, and we had a higher infection rate than the rest of society.”

He notes that union members were working at their job facilities, not from home.

Perrone told SN his union has “lost about 600 members” to the virus, though he suspects the number is higher because of mis- or underreporting.

“This UNMC study makes clear that COVID-19 has — and continues to have — a serious and significant impact on America’s essential workers,” Perrone said. “These essential workers paid a hefty price for continuing to do their jobs, which kept food on American families’ tables and our economy moving throughout the pandemic.”

Additional measures the union is prioritizing:

Major upgrade in the next five-year Farm Bill: “We’ve been aggressively fighting for a transformational approach to the [U.S.] Farm Bill because it impacts nearly every aspect of food production,” said Perrone, listing workers’ rights in food production facilities and SNAP benefits as two issues. Food safety and living wages are also on UFCW’s wish list.

Inflation Reduction Act. Lowers prescription drug costs, health care costs and energy costs and boosts climate change action. “The Act puts the needs of America’s working families, including every member of UFCW, front and center. This law will put more money back in their pockets,” Perrone said. “This law is a massive win for UFCW’s tireless essential workers.”

Anti-hunger initiatives. The supermarket industry’s largest union has also long been a champion in the fight against hunger. The recent White House conference reminded the world that the UFCW is on the front lines to feed Americans, whether they can afford it or not.