Cub Foods plans to rebuild two Minneapolis stores that were closed after being damaged during the protests that erupted in the city and nationwide over the death of George Floyd.

Stillwater, Minn.-based Cub said Friday that it will reconstruct the Broadway Avenue and Lake Street stores in Minneapolis with franchise partner Jerry’s Foods, which owns both locations. Shut in late May, the stores are currently being cleaned and prepared for construction. A company spokesman said the retailer is targeting a reopening of the Broadway store in October and the Lake Street store by the end of the year.

Related: Cub Foods, Shoppers stores to be spun off from UNFI

Meanwhile, Cub is setting up temporary, 13,000-square-foot community stores at each site in response to food insecurity issues in both neighborhoods. Plans call for the temporary stores to open July 8 at Lake Street and later in July at the Broadway location.

Cub said the community stores will carry staple items from all supermarket departments, including fresh produce, meat, dairy and best-selling grocery products. Everyday prices will be the same as at a conventional Cub store. Pharmacy customer needs also will be supported, and the stores also will sell popular over-the-counter medicines, the retailer added.

“Cub is actively involved in our communities and it is our responsibility to roll up our sleeves and find solutions to help meet the needs of our neighbors, family and friends while our Broadway and Lake Street stores are under construction,” Cub Foods CEO Mike Stigers said in a statement. “We know that even though these two stores are closed, life events, activities, and special occasions continue to take place and the community needs its neighborhood grocer to be there providing access to essential food and grocery items. We’re proud to offer a variety of options for customers to shop with Cub.” 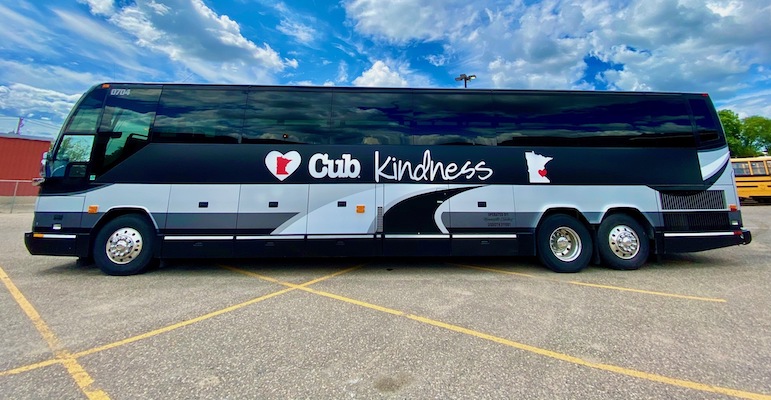 Cub will provide shoppers with free coach bus service from its Broadway and Lake Street stores in Minneapolis to other Cub supermarkets in the area.

Those options also include transportation and online grocery service. Cub said it will provide shoppers with free coach bus service from its Broadway and Lake Street stores to other Cub supermarkets in the area. Customers picked up from the Broadway location will be driven to the CUB Crystal store at 5301 36th Avenue N, whole those picked up from the Cub Lake Street location will be brought to the Cub Quarry store at 1540 New Brighton Blvd.

The bus service starts June 26 and operates from 10 a.m. to 6 p.m. daily, with pickups from the Broadway and Lake Street stores starting on the hour and drop-offs occurring on the half-hour. To promote social distancing, each bus will be limited to 20 riders and won’t make stops between stores.

In addition, Cub said it will provide free online grocery pickup service at the Broadway and Lake Street stores for orders placed cub-community-pickup.com. Customers also can continue to order groceries online and have them delivered to their home or office. The retailer noted that shoppers placing orders online for pickup or delivery can choose from a full selection of products.

“The work we’re doing to support these areas couldn’t be accomplished without the support of the entire Jerry’s Foods team, who are the franchise owners of the Cub Broadway and Lake Street stores,” Stigers commented. “Their dedication to the local community is paramount in helping bring these community stores to life.”

The George Floyd killing by a Minneapolis police officer was caught on video and touched off demonstrations and riots in cities and communities around the country, resulting in widespread closings of and damage to retail stores and other businesses.

Cub said it also plans to host community input sessions to give local residents an opportunity to share ideas and suggestions for the new Lake Street and Broadway stores. More information and scheduling for the sessions and the reopening of the stores will be forthcoming, the retailer said.

“As Minnesota’s hometown grocer, Cub has been an integral part of this state’s landscape for over 50 years,” Stigers added, “and we are fully committed to these communities, reopening our stores and being a part of these great neighborhoods once again.”

Part of United Natural Foods Inc. (UNFI), Cub Foods has a retail network of 52 wholly or majority-owned stores and 27 franchised or minority-owned stores in Minnesota, primarily in the Twin Cities market, and Illinois (one store).

Earlier this month, UNFI announced plans to split its Cub and Shoppers supermarket businesses from the company into their own operating unit. The move came after UNFI decided to hold off on the pending sale of the stores amid the coronavirus pandemic. The sale of the stores isn’t slated to resume for 24 months, the company said.