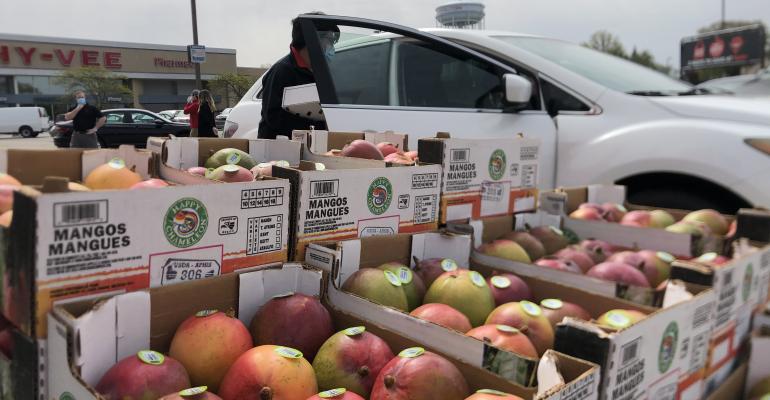 Hy-Vee
Hy-Vee's food donations have included 65 events across eight states, including 13 food bank donations and 52 contactless, drive-thru giveaways such as this event at a Marshalltown, Iowa, store.
Issues & Trends

By partnering with suppliers and food banks, grocers including Hy-Vee, Raley's and Save a Lot are helping hungry Americans during the pandemic and recession

Supermarkets around the country have stepped up during the COVID-19 pandemic to help redistribute a bounty of produce and other products that in many cases had had been intended for the foodservice industry.

With school and university cafeterias closed and most restaurants reduced to offering takeout and delivery only, if they stayed open at all, the industry found itself with an oversupply of perishable product. Stories emerged of farmers plowing under acres of crops, dumping truckloads of milk and slaughtering entire herds of livestock to keep from having to feed them.

Food retailers have been able to help minimize some of that waste by diverting product to people in need, including the millions of newly unemployed. Kroger Co. and Publix Super Markets both made commitments early on in the crisis to rescue milk and produce by helping to redirect excess product from farms to food banks. The U.S. government has since stepped in to commit billions of dollars for the purchase of excess agricultural products.

In the meantime, many food retailers have created a variety of new programs or expanded existing ones to feed the hungry and support local producers during the pandemic.

West Des Moines, Iowa-based Hy-Vee, for example, has been partnering with its suppliers to conduct a series of produce giveaways at many of its stores.

“When the COVID-19 pandemic began, we wanted to ensure we were helping in ways that provided immediate relief and expedited assistance,” Christina Gayman, director of public relations for Hy-Vee, told SN. “Two ways to meet those needs were to donate fresh produce to food banks and directly to customers during contactless, drive-thru events at our stores. Fresh produce is a nutritious option for families that supports health and wellness during these challenging times.” 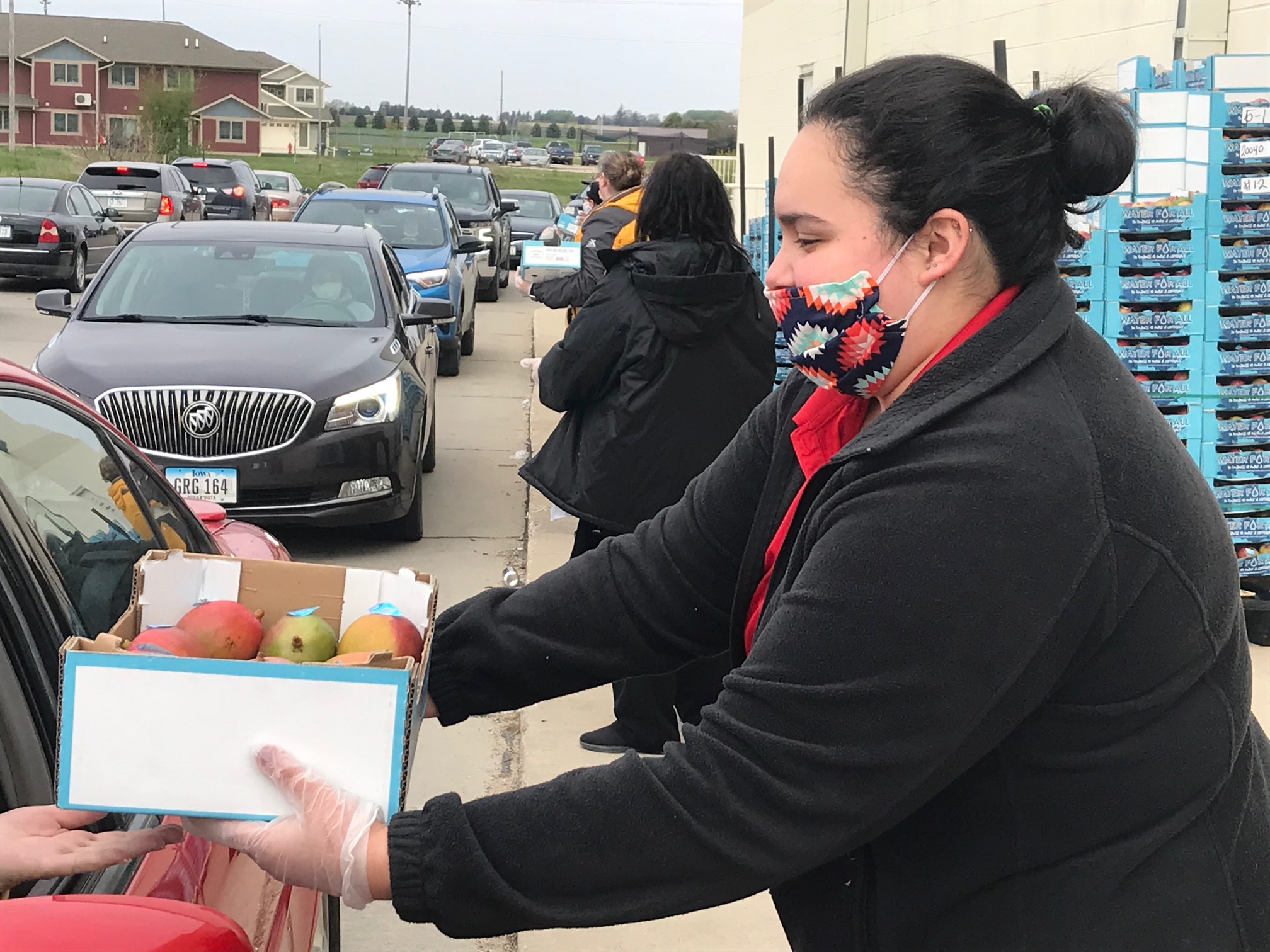 Hy-Vee stores have been running produce giveaways to needy customers, such as this event at its Storm Lake, Iowa, location.

“We had high-quality, fresh mangos available, and we couldn’t ask for a better ally to help get the fruit into the hands of families in need,” said Michael Castagnetto, president of Robinson Fresh, after a recent mango giveaway at seven Hy-Vee locations.

Hy-Vee also raised more than $1 million for Feeding America-affiliated food banks through customer donations at checkout during April and May.

West Sacramento, Calif.-based Raley’s has undertaken multiple initiatives to distribute products to those in need during the crisis. Beginning March 10, the company donated cases of salad dressing packets, butter sticks and salsa cups to Volunteers of America, which provides meals to seniors, disabled adults, former foster youth, homeless families and veterans across Raley’s footprint in Northern California and Northern Nevada. Raley’s also donated $100,000 worth of ready-to-eat meals, produce and proteins to the VOA, and two of the retailer’s suppliers, Harris Ranch and Pacific Seafood, also partnered with Raley’s to donate beef and chicken.

Other initiatives over and above Raley’s regular annual contributions to community organizations included donating 450 bags containing 10-12 freshly cooked, heat-and-eat entrées and salads through its Indomitable Hands partnership supplying homebound seniors, and another $1,500 in Ready to Eat Meals bags for distribution through the Sacramento County Sherriff’s office.

Although Raley’s did not specifically divert excess agricultural products from farms to those in need, the retailer sought to assist some producers by buying excess product for resale to its own customers.

“We did pivot to stocking alternate sizes and grades of produce in our stores knowing that the valve on the foodservice business was closing for our supplier partners,” Kevin Buffalino, public relations and partnerships manager at Raley’s, told SN. “For instance, we started stocking several products typically sold directly to the foodservice industry, such as peeled garlic, bulk bags of carrots, alternate sizes of potatoes, etc.”

Helping hand to — and from —suppliers

Sister chain Giant of Landover, Md., meanwhile has donated more than $900,000 to its five Feeding America food bank partners, including $400,000 raised through the chain’s “Round Up” campaign that allowed customers to round up their purchases to the nearest dollar amount as a donation. The chain also donated $500,000 to local nonprofits, many which focus on feeding the needy in Giant’s communities.

Giant has also partnered with some of its vendor partners to donate additional food to the food banks it supports.

Among other initiatives around the country, St. Louis-based Schnuck Markets, which previously sought to help out local restaurant operators by offering their prepared meals in its stores, also donated $605,000 to support coronavirus relief in the areas where it operates. It also raised $225,400 for United Way agencies in its operating areas through a Round Up at the Register program, and added another $24,600 for a total of $250,000.

Phoenix-based Sprouts Farmers Market sent a caravan of trucks loaded with fresh produce, bread and other food and supplies from its warehouse in Glendale, Ariz., to three remote communities in Arizona in partnership with Helping Hands for the Navajo Nation.

“The efforts of the volunteers who organized this caravan are truly humbling, as are the tremendous needs facing the Navajo Nation,” said Lyndsey Waugh, executive director of Sprouts Healthy Communities Foundation, in a statement. 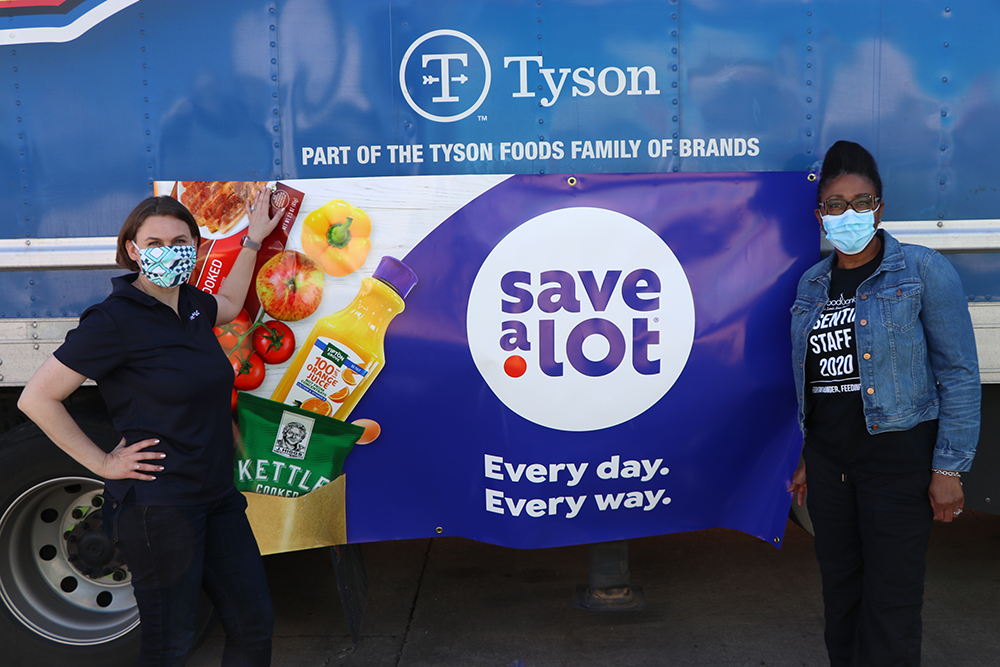 Save a Lot’s Sarah Griffin and the St. Louis Area Foodbank’s Lenora Gooden joined together with Tyson meats to bring 40,000 pounds of chicken to hungry communities.

And this month, the Save a Lot discount grocery chain based in St. Louis partnered with Tyson Meats to donate 40,000 pounds of chicken to the St. Louis Area Foodbank to help eliminate hunger in Missouri and Illinois. A longstanding partner of the St. Louis Area Foodbank, St. Louis-based Save A Lot stores and its local distribution center in Edwardsville, Ill., have donated nearly 400,000 pounds of food this year to-date in support of the organization’s efforts to create a stronger, healthier bi-state region where no one goes to bed hungry.

“Now more than ever, the issue of food insecurity is hitting home for communities across the country,” said Damir Kordic, vice president of operations for Save A Lot. “As a neighborhood grocery store, Save A Lot is committed to providing much-needed support and services to those communities who need it most, including right here in our own backyard of St. Louis.”