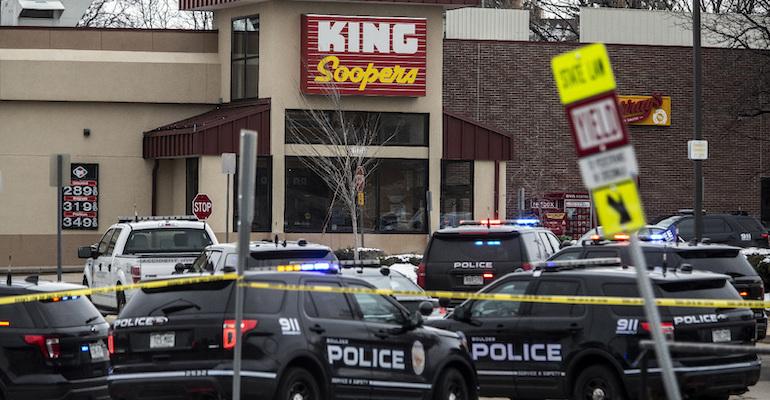 Ten people, including a policeman, three store employees and an Instacart shopper, killed at store in Boulder, Colo.

The Kroger Co. is working with local authorities in the aftermath of yesterday’s fatal shooting at a King Soopers supermarket in Boulder, Colo., where a lone gunman killed 10 people, including a police officer, three store employees and an Instacart shopper.

In a press conference Tuesday morning, the Boulder Police Department identified the shooter as 21-year-old Ahmad Al Aliwi Alissa from Arvada, Colo., who was taken into custody yesterday afternoon and wounded in an exchange of gunfire with responding officers. The slain officer, 51-year-old Eric Talley, an 11-year Boulder Police veteran, was identified by the department yesterday and reportedly was the first officer to respond to the scene.

Boulder Police released the identities of the nine other victims at the press conference. They included 25-year-old Rikki Olds, identified by the Denver Post as a front-end manager at the King Soopers store, as well as fellow store employees Denny Stong, 20, and Teri Leiker, 51.

Related: Walmart reaches out to community after El Paso tragedy

“We are horrified and deeply saddened by the senseless violence that occurred at our King Soopers store located on Table Mesa Drive in Boulder, Colo., resulting in the deaths of 10 people, including three of our associates: Denny Stong, Rikki Olds and Teri Leiker; and Boulder Police Department officer Eric Talley," The Kroger Co. said Tuesday evening in an updated statement on Twitter.

“The store will remain closed while law enforcement completes their investigation,” Kroger added.

Also killed was Lynn Murray, 62, identified in media reports as an Instacart personal shopper who was at the King Soopers store filling an order when the attack occurred.

“Today, we mourn the devastating loss of a member of the Instacart shopper community," San Francisco-based Instacart said in a tweet late Tuesday. "Our deepest sympathies are with the loved ones of all those impacted by this shooting, as well as the King Soopers family and the community of Boulder."

The shooting began sometime after 2:30 p.m. MT on Monday in the parking lot of the store, situated at Table Mesa Drive and South Broadway in Boulder. Police and emergency personnel responded quickly, with some law enforcement wearing body armor and carrying rifles. Boulder Police sent out a tweet at 2:49 p.m. local time that read, “ALERT: Active Shooter at the King Soopers on Table Mesa. AVOID THE AREA.”

According to the Denver Post, after about an hour, a “bearded, balding man” in handcuffs — wearing no shirt or shoes, just shorts, and with a bloodied leg — was escorted from the store by police. At the time, the Post and other media reports identified the man as the likely shooter, but authorities had not yet provided confirmation.

“Our hearts are broken over this senseless act of violence,” King Soopers spokeswoman Kelli McGannon told the Post after the shooting yesterday.

People inside the store at the time of the shooting described a chaotic scene to The New York Times. Alex Arellano, a King Soopers meat department worker, said he heard gunshots and then saw people running toward a nearby exit. “I thought I was going to die,” Arellano told the Times.

Maggie Montoya, a pharmacy technician at the King Soopers store, told Colorado Public Radio that she and other pharmacy staff hid in a small room with a metal door, where they had been administering COVID-19 vaccines. Montoya said in the CPR report that she heard law enforcement officers closing in on the suspect and, when he responded to their calls for him to surrender, she was surprised to hear his reply coming from just in front of the pharmacy counter.

FMI-The Food Industry Association President and CEO Leslie Sarasin expressed the “terrible sadness” that the grocery industry feels from the “horrific events” at the King Soopers store in Boulder.

“We’re all devastated by the loss of life and the entire tragedy that took place there,” Sarasin said prior to a session at the Meat Institute’s Annual Meat Conference. “Our hearts are with our King Soopers and The Kroger Co. colleagues that we have in this industry and all of the associates at the company, as well as their families, friends and neighbors who frequent this vibrant grocery store in Boulder.

“We condemn the violence, and we commend the first responders, who were on the scene almost immediately and who came to protect those who were present yesterday and to help serve the communities that they live in,” Sarasin said. “Our food industry is strong. And we’ll help each other get through this, and we’ll help each other find peace as a result of this.”

United Food and Commercial Workers Local 7, based in Denver, represents more than 17,000 grocery workers in Colorado and Wyoming, including 32 members who work at the King Soopers store in Boulder where the shooting occurred. The union confirmed that some of its members were working during the shooting.

“Today, our community experienced a senseless act of violence that caused an unnecessary loss of life in Boulder’s vibrant community. It is with deep sadness we mourn the victims and their families who have lost loved ones today, including the heroic Boulder police officer who died in the line of duty,” Kim Cordova, president of UFCW Local 7, said in a statement.

“We are forever grateful to the grocery workers, customers and the first responders who acted swiftly to prevent even greater loss of life, protecting our members and all those in danger inside the store,” Cordova added. “This senseless act of evil also highlights and shines a light on the best of human nature. There are news reports that after gunshots rang out, grocery workers helped customers in the store find safety, directing shoppers to an exit at the back of the store, and assisted one another to escape the danger inside. No one should have to fear for their lives while they grocery shop or go to work every day.”

“Coloradans went to their local King Soopers to pick up groceries, to buy eggs, some of them to get a COVID vaccine. In a mere instant, our community is turned by a senseless act of violence,” he said.

“Grocery stores like King Soopers have been one of our consistent gathering places, one of the few routine activities that we’ve continued to engage in as Coloradans and as Americans. It’s hard to describe what it means for this safe place to see a horrible tragedy like this unfold,” Neguse told reporters. “There’s a lot that we don’t know that’s still unfolding from yesterday’s events. But let me simply say this: This cannot be our new normal. We should be able to feel safe in our grocery stores.”