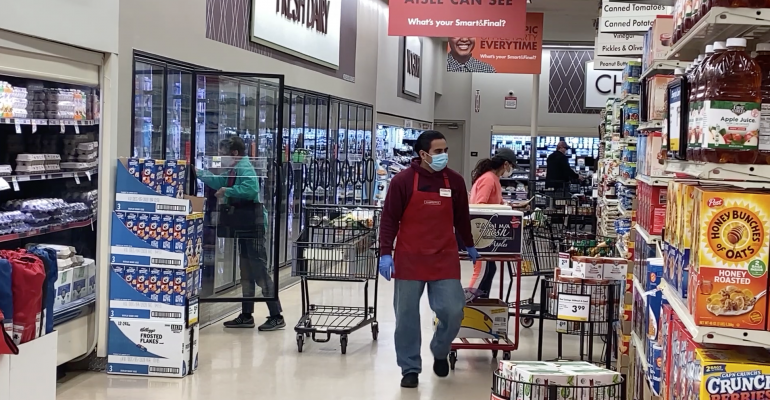 Smart & Final
Of companies polled by Advantage Sales, 63% of CPG manufacturers and 81% grocery retailers said price hikes will be the top driver of dollar sales gains in 2021.
Issues & Trends

Six in 10 manufacturers and seven in 10 retailers think consumer packaged goods (CPG) dollar sales will rise during the holiday buying period, according to Advantage Sales’ “Outlook October 2021” grocery industry report, released yesterday. Of the companies surveyed, 63% of manufacturers and 81% retailers said price hikes will be the top driver of year-over-year dollar sales growth for 2021, the Irvine, Calif.-based CPG sales and marketing firm reported.

Expectations diverge, however, beyond the year-end outlook and the impact of escalating prices, the study found. While 72% of retailers polled forecast grocery dollar sales growth in the 2021 fourth quarter, 58% expect the uptick to carry into the 2022 first quarter, whereas 62% of manufacturers project both Q4 2021 and Q1 2022 growth.

Likewise, excluding price increases, 47% of manufacturers cite improved supply and 39% name elevated at-home consumption as dollar sales growth catalysts, compared with 35% and 62%, respectively, among retailers. Interestingly, manufacturers pointed to distribution gains (33%) and innovation (32%) as growth drivers, while none of the retailers surveyed cited those factors. 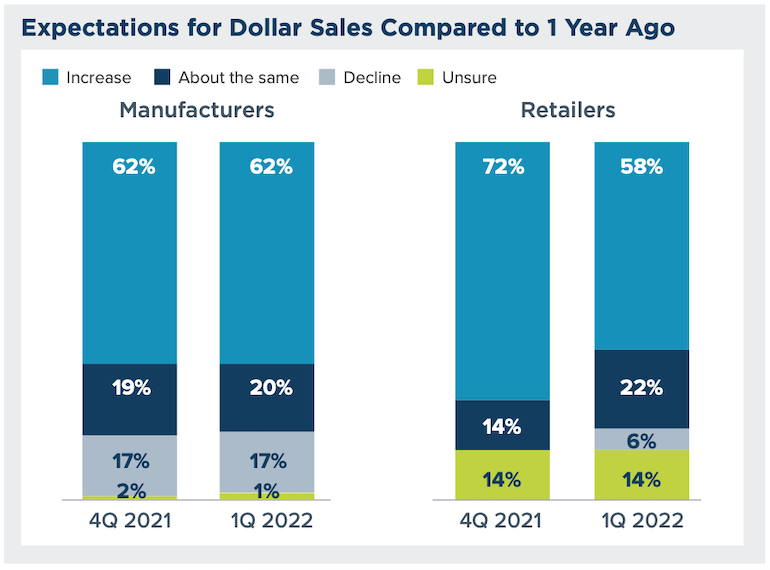 “Closing out the year and looking ahead to the first quarter of 2022, consumer packaged goods manufacturers and grocery retailers are predicting continued sales growth as they navigate rising costs and supply chain challenges, rethink in-store space allocation and focus on investments in digital commerce,” Advantage Sales said in the “Outlook October 2021” report, based on online surveys of 79 CPG manufacturers and 36 grocery retailers in September by SMARTeam, the firm’s CPG research and insights team.

Most of manufacturers’ price elevations are under double digits, with 55% of companies surveyed hoisting prices 6% to 10% and 34% enacting 1% to 5% hikes across first, second and third increases.

Unsurprisingly, the higher prices are trickling down to consumers. Three-quarters of manufacturers reported that 50% to 100% of their raised prices show up at the shelf across first, second and third rounds of increases.

Shoppers already have seen fewer in-store and online deals during the COVID-19 pandemic, as grocery suppliers and retailers grappled with inventory shortages. The latest supply-chain challenges stand to bring more of the same. Over the next six months, 52% of manufacturers plan to reduce trade promotions “a little” and 17% plan to do so “a lot” versus the pre-pandemic period, according to the study. Seventeen percent expect no changes to promotions, while 13% plan small increases. Only 1% aim to step up promos “a lot.”

Manufacturers named supply constraints (57%), funding shifts to digital investments (51%) and cost increases (49%) as the top reasons for scaling down trade promotions. Another 37% said they’re trying to “be more surgical” with promos because of inflation, and 31% are finding promos to be less effective.

“Three-fourths of manufacturers and two-thirds of retailers say they’ll be changing their promotion strategy,” Advantage Sales noted. Manufacturers looking to boost promos over the next six months cited retailer partnerships (60%), competitive pressure (50%) and increased innovation support (40%) as the main reasons for doing so.

At the root of the current volatile environment are supply issues. Among manufacturers polled, 93% identified transportation and 90% named manufacturing labor as the primary challenges, followed by raw materials (75%), packaging (63%), distribution (56%), chargebacks (30%), retail labor (27%) and safety protocols (13%).

“After a tumultuous year and a half, manufacturers are more optimistic than retailers when projecting level of supply for the next two quarters,” Advantage Sales said in the report. “Widespread knowledge of supply chain challenges are likely to lead retailers and consumers to alter their shopping behavior, especially around the holiday shopping season,” the firm added.

Twelve percent of retailers said they aim to reduce their overall store footprint. In turn, 67% reported increasing their digital investments “a lot” and 30% did so “a little,” while 70% boosted in-store merchandising “a little” and just 7% did so “a lot.”

“The recent decline in new cases of COVID in the U.S. has spurred cautious optimism surrounding the pandemic’s lifecycle and an economic recovery,” Advantage Sales said. “But grocery manufacturers and retailers have learned to expect the unexpected, and their predictions, changing strategies and investments for the next six to 12 months reflect that mindset.”

More than half of retailers are expanding their fresh category offering. Four in 10 plan to trim space devoted to tobacco and general merchandise.

Manufacturers say retailers that are winning online are leveraging new shopper fulfillment options, are focusing on online shopper experience and services, and have a retail media network. Nearly all retailers surveyed say they have increased their digital investments this year compared to 2019.