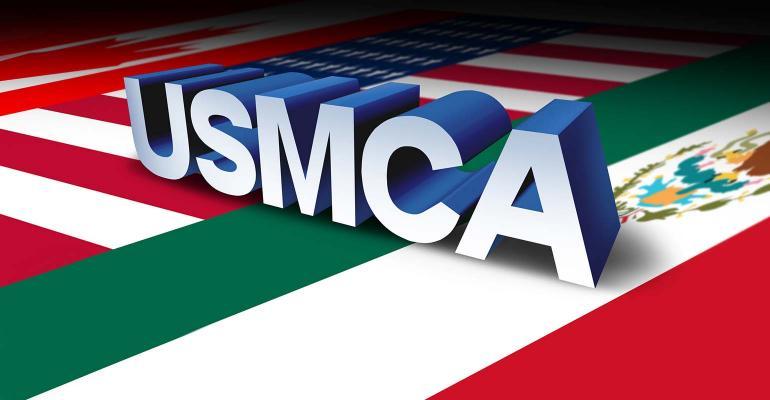 wildpixel/iStock/GettyImagesPlus
The new USMCA agreement comes over a year from when the original deal was signed between the United States, Mexico and Canada.
Issues & Trends

Tuesday morning House Democrats announced that they had signed off on a new version of the United States-Mexico-Canada Agreement (USMCA), and that U.S. Trade Representative Robert Lighthizer was headed to Mexico to sign off on the new revised deal with Mexico and Canada.

The agreement comes over a year from when the original deal was signed between the nations. Speaker of the House Nancy Pelosi (D.–Calif.) said the original deal was a non-starter for House Democrats, yet the new version produced to account for concerns on the environment and enforceability is “infinitely better than what was initially proposed by the Administration,” Pelosi said in a press conference Tuesday morning.

House Ways and Means Committee Chairman Richard Neal (D.–Mass.) said the negotiations between the Gang of 8 House Democrats and Lighthizer was “Intense, argumentative, angry negotiations” and “got really hot on a number of occasions.” Neal joked he holds the world record for hanging up on each other in phone conversations with Lighthizer.

But at the end, Neal said the deal offered an “opportunity we couldn’t let get away from us.”

Pelosi said she still hopes to end the current session by Dec. 20, and a vote would come by that date. Neal said members would soon receive implementing legislation soon to review the agreement and get the agreement to the floor and added there is “no reason for unnecessary delays” but also added there would be time for people in the caucus to vet what was put together.

Senate Finance Committee leaders, who will shepherd the bill in the Senate, had not yet been briefed on the new agreement but welcomed the deal. Chairman Sen. Chuck Grassley (R.–Iowa) said he looks forward to reviewing the specific language soon and expects committee members will be briefed in person by USTR this week.

“Passage of USMCA will be a significant win for farmers, workers and all Americans. Renegotiating NAFTA was a central campaign promise made by President Trump. He kept his word and Americans will enjoy the many benefits of this upgraded trade deal as a result. The nation’s economy under President Trump has achieved historic levels of employment and wages are finally growing after years of stagnation. This trade deal will help create even more jobs and make us stronger as a country,” Grassley said.

Senate Finance Committee ranking member Ron Wyden (D.–Ore.) said he does not have the details on how closely the agreement adheres to a trade enforcement regime proposed by himself and Sen. Sherrod Brown (D.–Ohio.) “I will be scrutinizing it closely to determine whether the final proposal contains the trade enforcement tools we have proposed.”

America’s great USMCA Trade Bill is looking good. It will be the best and most important trade deal ever made by the USA. Good for everybody - Farmers, Manufacturers, Energy, Unions - tremendous support. Importantly, we will finally end our Country’s worst Trade Deal, NAFTA!

The Food Marketing Institute voiced its support for USMCA’s path forward. “The USMCA improves NAFTA by modernizing it for the 21st century and securing the gains of the last 25 years for future generations,” said Andy Harig, vice president, tax, trade, sustainability & policy development for the Arlington, Va.-based food retail industry association. “Areas like biotechnology and ecommerce — which were in their infancy when the original deal was negotiated — are addressed, as are science-based food safety standards that reflect the growth of knowledge in the field.

Agricultural groups were also quick to praise the deal announcement.

National Grain and Feed Association (NGFA) president Randy Gordon appreciated the dedication and persistence of Lighthizer and House leaders. “We also commend the governments of two of our most important trading partners — Mexico and Canada – in working with the United States to accommodate these concerns,” Gordon added.

The USMCA trade agreement will preserve or expand upon critical market access for U.S. agricultural products in the North American market. In addition to maintaining a tariff-free environment for most agricultural goods, USMCA also will help address non-tariff barriers, which are paramount among the current global challenges that distort and slow cross-border trade flows. Among other benefits, USMCA will: facilitate cross-border trade flows through higher levels of regulatory coherence and cooperation; implement timelines and notifications for adverse import checks; include steps to reduce the likelihood of trade disruptions in products of agricultural biotechnology; use technical consultations for sanitary and phytosanitary (SPS) disputes; and require that SPS standards be grounded in science and based on proper risk assessments and implemented using accepted risk management techniques.

Michael Dykes, D.V.M., president and chief executive officer of the International Dairy Foods Association (IDFA), said, “Once ratified, the new USMCA deal also delivers peace of mind for our businesses, removing the handcuffs of uncertainty that have constrained business decisions over the past two years as the deal was negotiated. Make no mistake about it, for the U.S. dairy industry — farmers, processors, and suppliers — the USMCA deal is a major win that levels the playing field with our largest trading partners.”

“Many people made this day possible. Foremost are the members of the International Dairy Foods Association — more than 450 businesses throughout the dairy value chain from dairy cooperatives to processors and retailers who understand the importance of exports and trade to the more than 3 million Americans who rely on dairy for jobs and income. Our IDFA members participated in dozens of meetings and events to show their support for passage of USCMA. On many occasions, we spoke directly to members of Congress and officials in the Trump Administration about how crucial this agreement is to the future of American dairy. We also worked as part of a persistent coalition of more than 1,000 food and agricultural businesses and organizations that united to raise our voices in support of USMCA,” Dykes noted.

Angela Hofmann, co-executive director of Farmers for Free Trade, the national, bipartisan coalition of America’s leading ag commodity and business groups, said the deal is welcome news and a relief for American farmers. “Now it’s time to get the bill passed before politics can get in the way. Farmers and ranchers will be watching closely to ensure that their members of Congress are standing up for American agriculture,” Hoffman said in a statement.