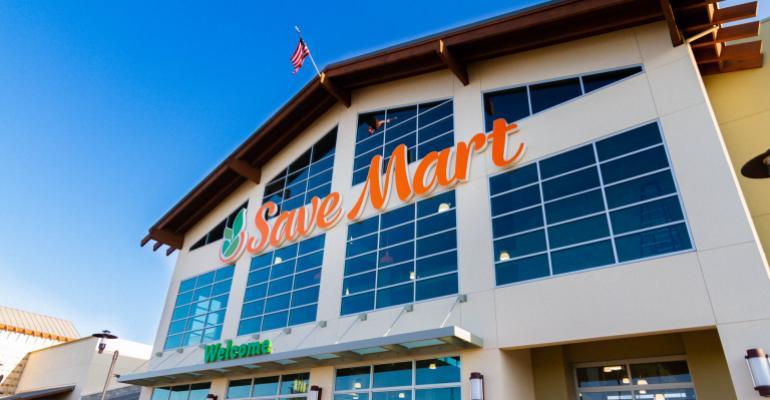 Save Mart
Save Mart began providing the hourly bonus last March to about 16,000 store, distribution and transportation workers.
Issues & Trends

Save Mart marks one year of pandemic hazard pay for workers

The Save Mart Companies has passed the one-year mark of offering frontline workers weekly hazard pay during the coronavirus pandemic.

Modesto, Calif.-based Save Mart said late yesterday that it’s the only grocery store chain that has provided hazard pay and other COVID-19-related benefits “without interruption” since the outbreak of the virus.

On March 27, Save Mart announced that all frontline associates — including in Save Mart, Lucky and FoodMaxx stores, as well as distribution centers and transportation — would receive weekly bonuses of $2.50 to $3.50 per hour worked that would be in effect during the pandemic. For current employees, the bonus pay was made retroactive to the week of March 8.

About 16,000 employees have received the weekly bonus, according to Save Mart, which operates 204 stores in California and Nevada, with warehouses in Roseville and Merced, Calif.

“Our stores would not operate without the dedication of our frontline store and distribution center employees, and we are enormously humbled and grateful for their resilience and adaptability,” Hal Levitt, senior vice president of retail operations and supply chain for The Save Mart Companies, said in a statement.

Employee and customer health and safety measures taken by Save Mart during the pandemic include instituting sick-leave bank to account for extended leave because of COVID-19 infection, along with paid leave to accommodate child care; providing employees with face coverings, hand sanitizer and gloves; and performing wellness checks at the start of each shift.

Other efforts include plexiglass shields at all full-service check stands (front and rear-facing); self-serve checkout, bakery, deli, and pharmacy counters; social distancing, including floor decals and customer capacity limits; and more frequent and deeper surface cleaning and disinfecting, including checkout lanes, shopping carts, high-touch areas and employee common areas. Save Mart said it also requires both customers and employees to cover their faces in stores.

“And with the vaccine eligibility expanding to include grocery workers, we have also instituted flexibility and paid time off as needed for employees who elect to receive the COVID-19 vaccine,” Levitt added.

Save Mart Companies’ retail banners include Save Mart supermarkets in California’s Central Valley and northern Nevada (82 stores), Lucky and Lucky/California supermarkets in the San Francisco Bay Area (68 stores), FoodMaxx warehouse grocery stores in the Bay Area and Central Valley (53 locations) and one MaxxValue discount food store in Modesto. The company also operates Smart Refrigerated Transport and is a partner in Super Store Industries (SSI), which owns and operates a distribution center in Lathrop, Calif., and the Sunnyside Farms dairy processing plant in Turlock, Calif.

Save Mart’s announcement comes after a flurry of municipalities across California enacted hazard pay mandates for grocery store workers, with local officials noting that these employees still face high exposure to COVID-19. Cities that have implemented or approved ordinances requiring $5 hourly hazard-pay increases for grocery store workers include Long Beach, Los Angeles, Oakland, San Mateo, Daly City, San Francisco, Santa Clara, San Leandro and Berkeley. Supermarket retailers have criticized the hazard pay mandates, saying they unfairly single out grocery employees — not all frontline workers — and large chains. They also contend that the focus should instead be on vaccinating grocery workers to create a safer work environment.