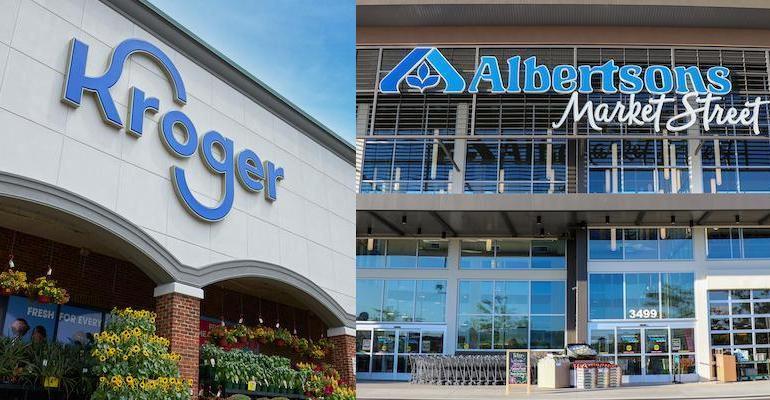 Getty Images
Albertsons and Kroger recently told the attorneys general they would continue with the payout, despite a call to do otherwise.
Issues & Trends

Two attorneys general have filed a lawsuit in federal court against The Kroger Co. and Albertsons Companies Inc., seeking a temporary restraining order to stop a nearly $4 billion payout to Albertsons’ shareholders until a full review of the companies’ proposed $24.6 billion merger deal is complete.

The lawsuits follow Racine’s effort last week in leading a group of state attorneys general to call on Albertsons to stop the payout until the proposed merger’s impact on workers, consumers, and competition can be fully assessed.

Under the merger agreement, Kroger is slated to acquire Albertsons for an estimated total consideration of $34.10 per share, including the assumption of $4.7 billion of Albertsons’ debt. The deal also calls for Albertsons to pay a special cash dividend of up to $4 billion, or about $6.85 per share, to stockholders on Nov. 7. That payment would reduce the merger transaction’s per-share consideration to approximately $27.25.

Albertsons and Kroger told the attorneys general they would continue with the payout.

“The lawsuits brought by the Attorneys General are meritless and provide no legal basis for canceling or postponing a dividend that has been duly and unanimously approved by Albertsons Cos.’ fully informed Board of Directors,” an Albertsons Companies spokesperson said in a statement.

“The allegation that this dividend will somehow hinder our ability to compete in the marketplace is also meritless,” the statement continued. “Given our financial strength and positive business outlook, we are confident that we will maintain our strong financial position as we work toward the closing of the merger.”

The statement went on to say that the special dividend announced on October 14 is the means by which Albertsons is independently executing its longstanding capital return strategy and is scheduled to be paid to Albertsons Cos.’ stockholders on November 7.

“It is not contingent on our merger with Kroger and is not in any way a condition to Albertsons Cos.’ or Kroger’s obligation to consummate the proposed merger  – it will be paid regardless of whether the merger is completed,” the Albertsons spokesperson said.

Albertsons first announced the special dividend on October 14,  in direct connection with their merger with Kroger. According to Racine’s office, the “special dividend” risks significantly limiting Albertsons ability to operate and properly compete with Kroger and other supermarkets, which could “seriously impact consumers, workers, and the grocery industry writ-large before regulators even have the chance to review the deal.”

“Albertsons’ rush to secure a record-setting payday for its investors threatens District residents’ jobs and access to affordable food and groceries in neighborhoods where no alternatives exist,” said Racine in a statement. “This would have a particularly devastating impact on struggling people and families with access to fewer grocery stores during a time of historically high inflation.”

Organizations knowledgeable about labor conditions, including the UFCW local 400 have raised substantial concerns that this dividend will make it more difficult for Albertsons to compete for labor by reducing Albertsons’ ability to offer wage increases, pensions, or store improvements.

“As the union of grocery workers in the District of Columbia and beyond, we applaud Attorney General Karl Racine for taking action to halt the brazen attempt to loot Albertsons through an unprecedented special dividend payment,” said Mark Federici, president of United Food & Commercial Workers Local 400. “If allowed to occur, this payout will leave Albertsons largely depleted of liquid assets and put the livelihoods of countless grocery workers in jeopardy.”

Do you view the shareholder payout as a problem? Or is this Albertsons' business and not an issue at all? Let us know in the comments below, or email your thoughts to SN Executive Editor Chloe Riley at [email protected]