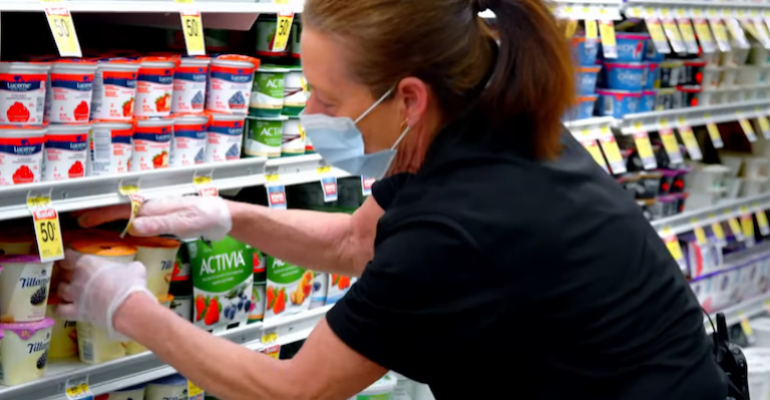 Albertsons Cos.
Though retailers have implemented a range of safety measures and benefits, UFCW said "appreciation" or "hero" pay should be reinstated because coronavirus remains a threat to frontline grocery workers.
Issues & Trends

UFCW said Wednesday that, as part of the campaign’s initial phase,“worker actions” will be held this week at grocery stores and other essential businesses in at least 26 cities in California, Texas, Georgia, Virginia, Colorado, Washington, Tennessee, Maryland, West Virginia and other states hit hard by coronavirus. The union said the initiative also will include grassroots actions plus targeted paid and digital media illustrating the danger that the virus continues to pose to food workers nationwide.

Additionally, UFCW said it aims to connect customers and communities with essential workers to urge grocery retailers to guarantee hazard pay — also known as “appreciation” or “hero” pay — as long as the coronavirus pandemic continues.

UFCW, too, is posting first-person testimonial videos from frontline workers calling on their employers to reintroduce hazard pay. In videos posted online thus far, workers expressed concerns about spreading the virus to family members and said the added pay would provide more financial assurance as well as signal a “thank you” to employees for their extra efforts. One worker said simply that the need to wear a face mask indicates that a hazard still exists.

In announcing the campaign, UFCW cited Whole Foods Market (owned by Amazon), Walmart, The Kroger Co., Albertsons Cos. and Ahold Delhaize USA as among “many essential businesses” that should restart hazard pay.

“America’s grocery workers are putting their lives on the line every day that they walk into the store, because this pandemic is far from over and the health threats are just as real now as they were when this crisis began,” UFCW International President Marc Perrone said in a statement. “It is outrageous that the CEOs of these companies refuse to restore hazard pay even as more of these workers are getting sick and dying every week. Hazard pay for grocery workers must be reinstated now.”

Since the coronavirus pandemic was declared a national emergency in mid-March, many grocery retailers implemented emergency pay for frontline workers in stores, distribution centers and/or other facilities.

Most programs entailed a temporary $2-per-hour or percentage wage increase for hourly workers and/or one-time bonuses. Some companies extended the hourly wage increases and bonuses more than once, including Kroger, Albertsons, Amazon/Whole Foods, Walmart and other chains. Retailers also invested millions of dollars in COVID-19 protection, health benefits and emergency sick-leave benefits for workers.

A number of chains, however, have ended the extra pay as the time periods for the programs have expired and states and municipalities nationwide have reopened businesses and public spaces shut during the pandemic. While some companies have continued to pay periodic bonuses, UFCW has said cash bonuses don’t reflect the total hours worked by associates and their potential exposure to the virus.

“Frontline grocery workers continue to put themselves at risk to ensure our families have the food we need,” added Perrone. “As long as the hazard of COVID-19 continues, these companies must do what is right and provide the hazard pay these grocery workers have earned and deserve.

In late August, UFCW reported that, among its membership, at least 103 grocery workers have died from the virus and more than 14,300 have been infected or exposed.