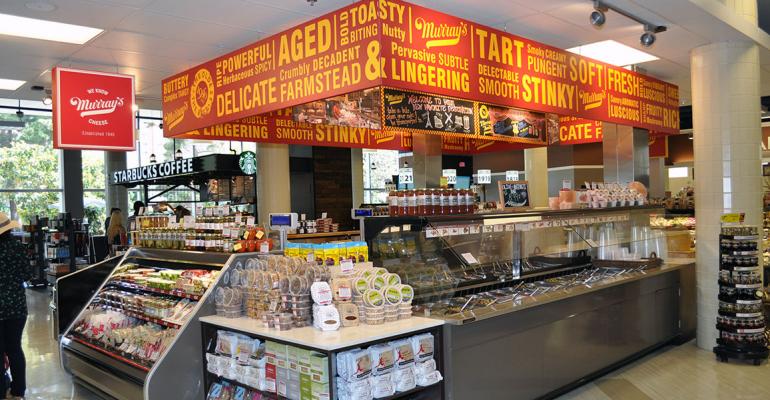 Kroger and the specialty cheese shop to merge

Kroger Co. has purchased the equity of Murray’s Cheese and acquired the building housing the New York City flagship of the specialty cheese shop, which has outposts in hundreds of Kroger supermarkets nationwide.

Murray’s former owner and president, Rob Kaufelt, will remain affiliated with the business as a strategic advisor. Nick Tranchina, who leads the Murray’s Cheese team in New York will report to Daniel Hammer, Kroger’s VP of culinary development and deli/bakery merchandising.

"When the Kroger and Murray's relationship started in 2008, we wanted to figure out how to bring the finest cheese and charcuterie to more people," said Hammer in a statement. "Today, we have more than 350 Murray's Cheese shops in Kroger locations from coast to coast — and that is thanks to the incredible passion and commitment of the team at Murray's to empower associates to share their love of cheese with customers. We look forward to learning from the very talented team at Murray's and working together to grow the business and build the iconic Murray's brand."

"Our customers are excited about the opportunity to buy the unique offerings of Murray's Cheese right in our store," Robert Clark, Kroger's SVP of merchandising, said in a statement in December. "We continue to see high demand and great buzz in new communities as the shops come to town."

Kroger said the stores succeed in part by replicating the experience customers enjoy at its Greenwich Village flagship store. Each carries hundreds of cheeses, charcuterie, olives, crackers and specialty food items from all over the world. Murray's is involved with product selection, staff training and development, merchandising and promotions. Its staff has trained thousands of Kroger’s cheese mongers and certified cheese professionals.

"For cheese lovers and connoisseurs, it doesn't get more authentic than Murray's," said Rodney McMullen, Kroger's chairman and CEO, in a statement. "Our customers are excited to buy the unique offerings of Murray's Cheese right in our stores, and we're excited to ensure this iconic cheese shop will remain a part of the Kroger family for many years to come."

Cheese is the biggest category in the specialty food space with $4.3 billion in sales, representing 7.7% of all specialty food sales, according to the Specialty Food Association’s 2016 State of the Industry data.

“It makes sense that [Kroger] would want that expertise within their stores and our data shows that 87.1% of all specialty food sales are coming through mainstream stores,” Ron Tanner, VP of government and industry relations, told SN. “Cheese draws people to the store and it’s a good profit contributor.”

Edit note: This story was updated on Feb. 7 after Kroger announced it would merge with Murray’s Cheese.