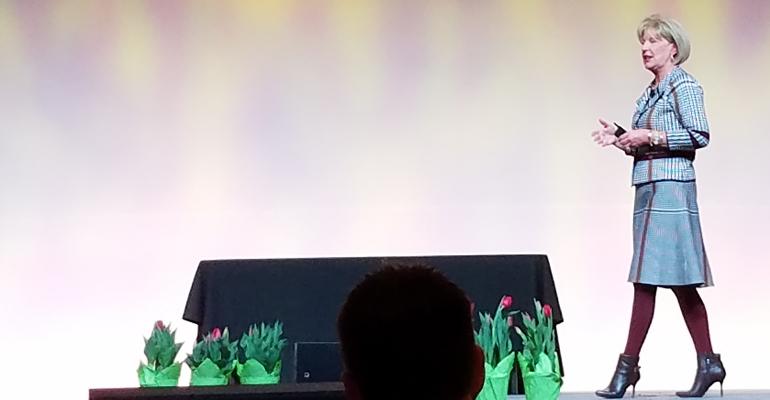 Jayne Homco says, "A can-do attitude is what’s going to help you in your career."
Top Retailers>Kroger

Be ambitious, but be patient. Seek experiences, not promotions. Get support in the workplace, but also at home. And never wear “old lady” shoes.

Jayne Homco, a 42-year veteran of the Kroger Co., imparted these bits of wisdom and more during the closing session at Western Michigan University’s 52nd annual Food Marketing Conference in Grand Rapids, Mich. on Wednesday. In an address aimed at students with aspirations to join the food retailing industry, the president of Kroger’s 127-store Michigan division said a rewarding career awaited them — provided they have the right ambition, work ethic and attitude.

“You’ll learn this over and over: A can-do attitude is what’s going to help you in your career,” Homco said. “It will take you farther than anything else you can do. It will take you as far as you want to go.”

Homco, wearing heels — “my mother always told me never to wear old-lady shoes” — said she drew these lessons from her own pioneering career, which began as a teen hourly worker at a Kroger store in her native Indiana, and eventually grew to leadership positions at six Kroger divisions. She has served as president of the Michigan division, based in Novi, Mich., since 2013.

Homco emphasized the importance of personal ambition, which she said helped her to overcome what could be a particularly difficult career field for women when she began.

She said took her first job, at age 16, with the goal of earning enough money to buy a car.

“In those days they did not hire girls as baggers, so the only position I could get was a demo person,” she related. “That means that 42 years ago I was selling stuff, and I’m still selling stuff today, and I love it. There’s nothing more fun than selling stuff.”

While in college Homco broke onto the stock crew, which while allowed under the union contract, was an unusual role for a woman to take then.

“I had a goal to move on to the stock crew because I was in college and I needed [to work] nights. But they did not have women on the stock crew. It was taboo. They said, we would never be able to keep up with the guys, we would never pull our weight,” she recalled. “Rest assured I kept up with every one of those guys throwing stock, and became the leader of the stock crew.”

As she ascended the management ladder following college, Homco was still a pioneer. Just one of the 140 stores in the Central Division had a woman store manager when she began that journey. She later became the first woman VP at both Kroger’s Dillon’s and QFC divisions.

“Today,” she said, “the opportunities you all have are incredible. There are so many avenues and so many places to go.”

Pursue goals with patience, she advised. Too many young workers today expect promotions within three or six months, and as a result tend not to learn the business as comprehensively as they might otherwise, she contended.

“In my first year, I was just trying to keep my head above water. Year two, I’m cycling myself and getting a better understanding, and trying to make a difference. Year three you’re helping the people you work with get promoted,” she said.

A career is about experiences, not levels, she said.

“I’ve had lateral moves. I’ve taken steps back to get additional experience that would help me in future roles. Lateral positions are not bad things, because every experience will help you in the future. You’ll get a network; find people who can give you advice. I didn’t ask for jobs. I did the best I could in the job I had and they came and asked me for something else.”

Success requires commitment to the work and support at home, she added. Homco credited her husband Daniel and their two dogs, G.G. and Sunny, for creating a supportive environment as she crisscrossed the country on assignments from Kroger.

“You’re going to be early in your career and early in your relationships,” she told the students. “Make sure your compatibility works. Before you get married you discuss common values, morals, kids, money, but I don’t think career is discussed a lot. But it’s hard for two people in a family to have a career. From the very beginning, we had an understanding that he was going to support me and follow my career. For a lot of women, that doesn’t happen.”

Professionally, Homco said she takes a particular pride in seeing colleagues succeed. The pursuit and development of dedicated co-workers — or what she called the “law of duplication” — is a key tenet of the company’s success, she said.

“You can’t get things done unless you have people who are working toward the same things you are working towards,” she said. “You’ve got to mentor, train and coach these people. You have to know your own job so you can have other people who report to you. Your finest moments in life are when your folks are promoted. That’s when I feel true success.”

For this reason, she said, younger workers “shouldn’t run and hide” when the executive team arrives for a store visit. “We want to duplicate you. We want you to learn from us, we want to know how you are making a difference.”

The yogurt section in a typical Kroger store when Homco began her career was eight linear feet. Today, it’s 200. That change has kept her excited over the years.

“When I was growing up in the ’60s and ’70s, we ate baloney on white Wonder bread. What I’d call gourmet back then was baloney that was fried. A frozen dinner in a compartmentalized tin plate. It was different back then, and to see the change since then has been remarkable.”